When, midway through this documentary, Courtney Love unapologetically states that Hole is HER band, there aren’t many that could disagree. She's the frontwoman, the songwriter, the headline-maker and the celebrity relationship-er. So while this film documents drummer Patty Schemel's struggle with drug addiction, you can't help but feel that her main role in rock 'n' roll history has been as a first-hand witness to events more important and interesting than her own story. As such, you really need to be a fan of the band - and not just of the grunge era in general - to really get anything out of this film.

Luckily, I am a fan. I had the t-shirts, the posters and whatever limited edition vinyl I could get my hands on - and yet, even I have to admit that this is a very niche viewing experience. It’s a documentary cobbled together from interviews with the band, chats with Schemel's drumming peers and her own collection of homemade on-tour videos. It offers a rare glimpse into the personal lives of Kurt and Courtney, an authentic cautionary tale for wannabe rock stars and a curious insight into a genuinely modest and funny woman who has battled addiction and struggled with the limelight. It’s just a shame that her story isn’t as attention-grabbing as everything else that’s going on around her.

That’s not to say that there aren’t a few flashes of brilliance though. While the private footage of Kurt and Courtney is obviously a big selling point for the film, the best moments come from Schemel herself. Guitarist Eric Erlandson says that he thinks all drummers are closeted comedians and Patty goes a long way in proving this theory. For the most part, she talks humbly about her struggles and is even, on occasion, unable to find the words to express herself properly, but there is always a sarcastic note or bout of self-effacing humour to round things out, making her a genuine and likeable subject. 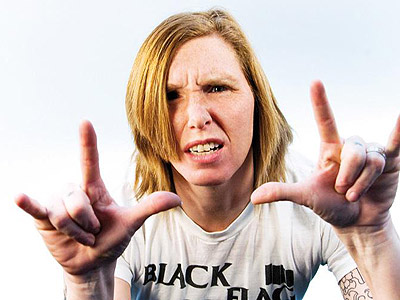 And still a rock star, as this picture proves.

The rest of the interviewees are a mixed bag of amusing anecdotes and angry opinions. While Veruca Salt’s Nina Gordon talks about feminism, Gina Schock from The Go-Go’s talks about Schemel’s drumming style and singer Phranc makes a convincing argument that grunge stole its fashion from lesbians, none are a more delight to watch than Schemel’s own mum. Sounding like a more sedate version of Howard Wolowitz’s mother, Mrs Schemel talks about her daughter’s rock and roll lifestyle with the mundane naivety of a typical, baffled parent and it makes for a hilarious flipside to all the other more serious commentary.

And then there’s Courtney Love, who for someone appearing in a documentary detailing the pitfalls of drug addiction, seems high as balls. In fact, in every shot of her talking to the camera, she’s reaching for more snacks to munch on, which I can only assume is a cover for the fact that she’s really chewing on her own gums. 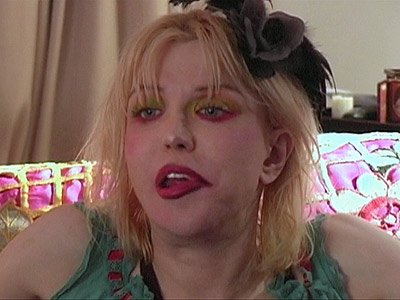 Pretty on the inside, apparently.

The film’s main flaws though stem from director Ebersole’s presentation of the material. With every chapter in the film introduced by a title card and feedbacking guitar, the result looks more like a MTV reality show than a theatrical release. And there’s a greater problem with the chronology, which sags in the middle thanks to a confusing decision to suddenly go back to Schemel’s school days to discuss her sexuality, despite the rest of the film concentrating on her career in Hole. It’s obviously an important part of Schemel’s life, but here it is presented as a lengthy aside rather than something that has been an important aspect of her character throughout her life.

All this put aside though, the film is certainly a comprehensive study of a lesbian drummer, a drug addict and one part of a turbulent rock band falling apart at the seams. And yet, despite all of this, you'll still be left with some doubt as to whether Schemel is worthy of such attention. Maybe it's because we've all seen biopics of rock legends that have lived more dangerous lifestyles before dying in a pool of their own vomit. Don't get me wrong, I'm glad Schemel survived all the trouble and tragedy in her life, but the fact that she did automatically makes her story seem a little... tame.

More:  Hit So Hard  Patty Schemel  Courtney Love  Hole  Kurt Cobain  P David Ebersole
Follow us on Twitter @The_Shiznit for more fun features, film reviews and occasional commentary on what the best type of crisps are.
We are using Patreon to cover our hosting fees. So please consider chucking a few digital pennies our way by clicking on this link. Thanks!