But then, as much as I’m sure the premise-in-a-nutshell is supposed to be relatable, this is a story for which plausibility took a running jump off a belief-suspension bridge. Instead, we have a stupendous high-as-a-kite concept worthy of the Farrelly Brothers, as we watch three perfectly rational men come to the conclusion that the best way of dealing with each of their difficult bosses is to murder them in cold blood. Here’s the justification for each:

Jason Bateman gets passed over for a promotion because his manager Kevin Spacey is a dick and gives it to himself instead (as well as a subsequent pay-rise and another office that he can knock through to make his own bigger). When Bateman threatens to leave, Spacey says he’ll have him blacklisted so he can never work anywhere again. Verdict: Kill him!

Jason Sudeikis works for lovely old Donald Sutherland, until he is killed in a car crash and his drug-addicted, comb-overed son Colin Farrell takes over and threatens to run the company into the ground with his psychotic management of the staff, ruining his father's good name and reputation in the process. Verdict: Kill him!

Charlie Day has to put up with his sex-crazed dentist boss Jennifer Aniston who harasses him every day with innuendo, inappropriate flirtation and outright sexual assault. Aniston says if Day doesn’t sleep with her, she will show his fiancée pictures taken on his first day in which he was drugged and then unwittingly placed in compromising positions with her. Verdict: Kill her! (Possibly sleep with her first? It is Jennifer Aniston.) 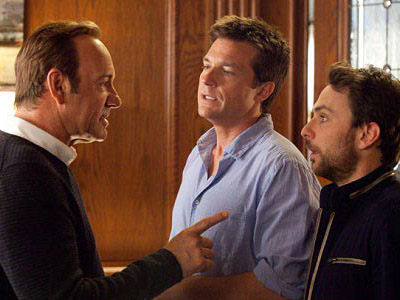 Look, I’m being mean, so killing me is ok.

Okay, so perhaps it’s unfair to judge a comedy harshly for a flawed premise when the obvious intention is just to give opportunities for hi-jinks and silliness. The film is, after all, as funny as you might expect from the top-notch talent involved (even if all the best bits were in the trailers). Jason Bateman plays his typical pragmatic leader among such humorous idiocy, while Charlie Day tends to win the comedy contest between the three leads as his raspy anxiety makes for many hoots and chortles.

Neither of them live up to Colin Farrell's whacked-out, coke-paranoid Bobby Pellitt, though, who has most of the best lines (including, in reference to a wheelchair-bound employee, "It creeps me out – rolling around all day in his special little secret chair!" – again, in the trailer). At the same time, Jennifer Aniston raises her potty-mouth game, discussing "cocks" and "pussy" with such abandon that it's all you can do to shake your head and think “Oh no no no…but you're Rachel..." Her first line, in which she asks Charlie Day if he has ever seen Gossip Girl only to say that she spent the previous night "fingering myself so hard to Penn Badgley, I broke a nail" left me flabbergasted. Which is, of course, the point, but still... Rachel. 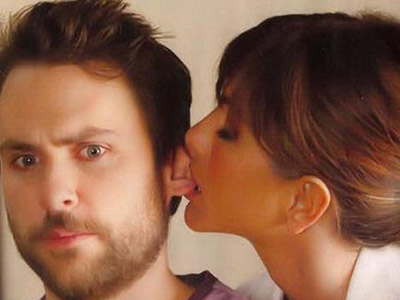 B-b-but...you're supposed to be with Ross?

Somewhere in the middle, Jamie Foxx pops up as low-level criminal Motherfucker Jones and clearly enjoys playing up all sorts of unpredictable reactions and shifty mannerisms, but it's not quite enough to be a memorable addition to a cast of comedy actors already making the film as funny as it can be.

Which brings me back to my point about the unbelievable premise. I know it's not to be taken seriously, and I know that it's not really the point in a film that's really aimed squarely at the post-pub Saturday crowd. Trust me though, come the film's ending (which also relies a little too heavily on a so-new-I-haven't-heard of it SatNav technology) you'll be left wondering why murder was ever on the cards in the first place. I mean, is there no US equivalent of the Citizens Advice Bureau?

More:  Horrible Bosses  Jason Bateman  Charlie Day  Jason Sudeikis  Jennifer Aniston  Kevin Spacey  Colin Farrell  Jamie Foxx
Follow us on Twitter @The_Shiznit for more fun features, film reviews and occasional commentary on what the best type of crisps are.
We are using Patreon to cover our hosting fees. So please consider chucking a few digital pennies our way by clicking on this link. Thanks!