Thirteen gets back to work and Masters finally sods off, taking her STUPID MOUTH with her.

I love House. In a world where you're supposed to talk at length about how you love The Wire because it's so dense and multi-layered (translation: "I am clever enough to understand it. Why don't you stick to The Bill?"), House is a show that quietly and unflashily goes about its business of being smart, funny, character-rich and hugely satisfying.

You can say it's formulaic, but you're saying it about six years later than everyone else. I wasn't listening then, and I'm not listening now. It long ago passed the point where the medical mystery each week was the story's focus, and now whether it's a double haematoma of the adrenal gland or encephalitis causing, um, third-phase brain meltage, it's all about how the doctors react to it, and what their decisions tell us about their characters. 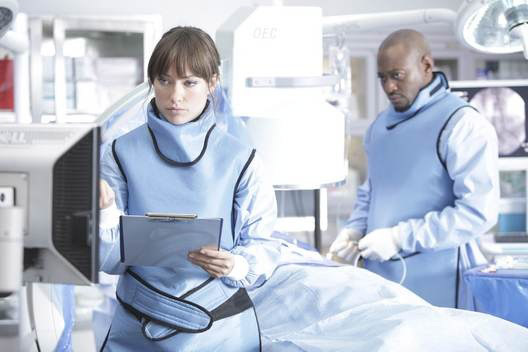 "There's no need to sulk. I'm just saying, a snood's one thing but a matching tabard?"

One of these decisions this week falls to the obligatory goody-goody character, Masters, in her final episode (which I understand was provisionally titled Thirteen's Back, She's Way More Interesting and Also Bang Tidy, So Let's Shunt the Replacement Chick Out Before She Uglies Up the Place), where she was put front and centre for her big emotional swansong. Like he does all characters with a moral compass, House wants to demonstrate that she's a hypocrite, so he refuses to let her intern for him unless she forges medical records, and manipulates her into choosing to amputate a child's arm, against the kid's will but to save her life.

The show presents this kind of dilemma on a weekly basis, but whereas Grey's Anatomy would use it to demonstrate the inherent good in people, House only poses the question and leaves it hanging. Does the end justify the means? If a patient won't do what's best for them, is it OK to trick them into it? It never moralises, and that's the refreshing thing about it. Specifically, it is the only TV show I can think of that dares to suggest that a drug addict can function day-to-day and even thrive professionally. Compare that with the last season of Entourage, where Vincent Chase's life fell apart like a modern-day Zammo after he took cocaine about three times.

House is not without its sticking points though. Late into the seventh season, the writers have failed to find anything for Foreman to do for about a year, and the occasional comedy bromance subplot with Taub doesn't really cut the mustard. Always the most complex of the underling doctors, the character's being underused. Plus he's not much more interesting on Twitter.

Yeah, cheers Omar. Next time you see something 'profound' while you're browsing Hallmark cards you'll be sure to let us know, won't you?

But the main problem is where they take it from here. With House the character back to square one, there are no more emotional depths for him to plumb. He's back on vicodin and seemingly over his breakup with Cuddy; at least, as much as he ever gets over anything.

So what next? If he and Cuddy get back together or start an on again-off again storyline the show's just retracing its steps. We've already seen him hit bottom through addiction, fall out with Wilson and drive away anyone who cares about him. I say they should rattle through Season Eight, then at the end he should find a cure for cancer but not tell anyone about it, then kill himself, happy in the knowledge he's solved his final puzzle.

More:  House  Hugh Laurie  Fox  Lisa Edelstein
Follow us on Twitter @The_Shiznit for more fun features, film reviews and occasional commentary on what the best type of crisps are.
We are using Patreon to cover our hosting fees. So please consider chucking a few digital pennies our way by clicking on this link. Thanks!