House is moving ever-closer towards its final episode, 'Everybody Dies', but we're going to have to wait a little longer to find out who. I mean, presumably it's not literally everybody. Unless … plane crash? SARS outbreak? Ooooh ...


After a couple of red herrings in recent weeks (House is terminally ill/no he's not; Wilson has a son/no he doesn't; House realises he loves his Green Card wife/she gets deported), this episode seemed to promise finally the final thing that would finally lead us to the final thing. Wilson has cancer. Up sprung a trailer in which he seemed to be dying.

This was pretty much exactly how I wanted the show to end. House's relationship with Wilson is – has basically always been – the only human connection he has and could never ruin, and the real corner into which he's painted himself. Simply put, you're taking a gamble if you only have one friend keeping you from outright despair. Wilson's death, and how House would cope with it, would be the ultimate test for the character, probably leading to some sort of Vicodin-and-hooker-induced suicide.

As he and Wilson concocted their plan of a ludicrously aggressive one-night kill-or-cure chemotherapy bender, you had the sense the outcome was inevitable, even if House, normally the first to advocate the medical nuclear option, was advising the cautious method. A dead Wilson on the sofa in the morning, whose body House would then probably dress up and ventriloquise into giving him sensible advice whenever he was doing something nuts. 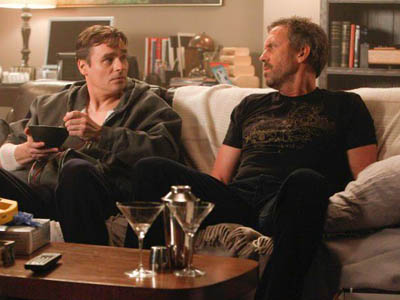 "My last night on this earth. Quantum Leap marathon?"

Meanwhile, back at the hospital, there was some kid and she had some disease and her mother was a doctor who got assigned to the case and yada yada yada. Sorry, but I didn't give a fuck whether she died or not. Intercutting with the standard sick patient storyline in this episode seemed trivial somehow: what I really wanted was a two-header with House and Wilson having their last arguments, bromantic confessions, whatever.

Then again, given that Wilson didn't actually die, just miraculously got better overnight despite being a pretty sure goner at one point, I probably would've felt cheated by it. But there were some nicely-done moments in it, for sure, like Wilson ranting at his friend for bringing misery to everyone in his life, and especially House saving him his last Vicodins, which is just about the greatest sacrifice he knows how to make. 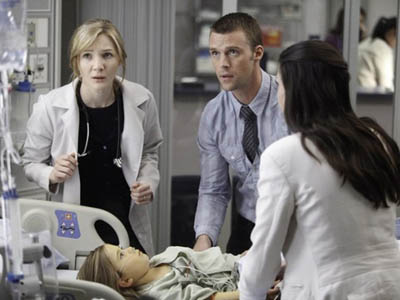 "EKG's a little over forty, white blood count's dropping, and shit, I'm going to have to get a job where I actually understand the dialogue soon, aren't I?"

The realisation that the episode was a little less significant than I'd expected made me go back and reappraise the team's story I'd dismissed, and with hindsight there was more to it. They'd had similar situations before: having to diagnose a patient with House only available by phone (from an airport, from the road on the way to his father's funeral, from a CIA field hospital), but never just completely alone as far as I can remember. But they managed it: even without their boss they knew instinctively that the girl's mother was too emotionally involved to be objective – one of House's golden rules – and they manipulated her and snuck around behind her back to get the job done. Chase had the epiphany moment, and even got to narrate the standard explanatory CGI journey through the body to the heart muscle. They've learned. Maybe they don't need House any more?

I'm not sure I do either. There aren't a lot of shows I've enjoyed and followed as religiously as this one over the last eight years, but I'm looking forward to a good ending. Say, Park snaps and goes on a killing spree?

More:  House  Hugh Laurie  Robert Sean Leonard  Sky 1  FOX
Follow us on Twitter @The_Shiznit for more fun features, film reviews and occasional commentary on what the best type of crisps are.
We are using Patreon to cover our hosting fees. So please consider chucking a few digital pennies our way by clicking on this link. Thanks!