So the other night I was performing surgery on my own leg in the bath just for kicks and I ended up having to call my ex-girlfriend to take me to the emergency room, which ultimately led to my driving a car through her living room window. Seemed like a good idea at the time.

Seven season finales of House, I've seen. They've ranged from the one where he got shot then hallucinated the rest of the episode, to the double-header when he couldn't save his best friend's girlfriend from dying, to the one where he went proper head mental and ended up checking himself into a loony bin. I remember all this because I've seen them all a few times, and because I have every episode synopsis listed in a heavily annotated spreadsheet.

Never seen a bad one either. But the seventh is probably the closest to it.

Season finales are traditionally explosive. People die. Buildings collapse. Folk get their legs cut off. You couldn't call 'Moving On' an explosive episode, but you could say it was a pretty seismic shift for House the character.

Starting up with a cold opening of Cuddy and Wilson surrounded by police and paramedics (lot of ambulance crew to treat one guy with a sprained wrist, wouldn't you say?), it more or less grabs you by the shirt and says: "ZOMG! Something MASSIVE's going to happen!" Cuddy tells a cop she doesn't know where House is and yes, she does want to press charges against him.

One 'Three days earlier' caption later and we skip back to, well, three days earlier. A conceptual artist is doing a performance piece that invites an audience to cut off her clothes and do anything else they like to her. Before anyone's had a chance to point out she's ripping off Yoko Ono's 'Cut Piece', a guy tries to set fire to her and she collapses.

Turns out she's done this deliberately so House will have to try and diagnose her and she can secretly film the whole thing for an art installation piece. Guess she doesn't get Sky 1 then. "It's a puzzle tailor-made for you," she says, whereupon he figures it out in about five minutes. 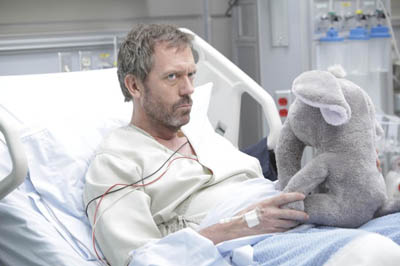 "At least you like my blues album, right, Mr Elephant?"

But more so than in the last couple of seasons, the patient becomes significant to House. It's one of those ones where he sees himself in her: she refuses to compromise her art for anyone, just like he won't give up his intellect. Presented with the choice of radiotherapy or likely death, she goes for the latter because the treatment will dull her inspiration – the same dilemma House was faced with in the season two finale ("Tell Cuddy I want ketamine"), and probably has been a couple of other times since. Give me a minute: I'll check the spreadsheet.

On these rare occasions when he meets someone who makes the same coldly rational choices he does, House feels validated, but when she changes her mind and chooses instead to stay alive and be with her boyfriend, he can't stand it. "What's more important than your brain, your abilities?" he rants at her. "It's where everything comes from – any meaning in your life!" It's flashpoints like these where we can see him unravelling (and, incidentally, where we see just how good an actor Hugh Laurie is – does the thought of Prince George in Blackadder even occur to anyone when they're watching House?) and where we get hints of the kind of event that will probably tip him over his final edge in a year's time. 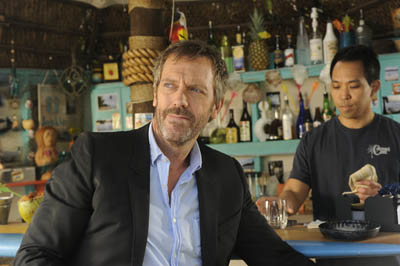 But here's the big but. When House finally sees Cuddy having dinner with another man, he guns his car down the street and smashes it through the wall and into her house. For all he knows, he's killing four people and possibly a toddler too. He's been reckless before, but usually about his own safety and the safety of strangers, patients who he sees just as puzzles. For him, this is out of character.

Maybe that's the point, though. We know this is leading us into the show's final season where you'd guess he'll finally end up overdosing or killing himself, and maybe we need this kind of anomaly to set that up. But for me it doesn't quite ring true. One thing it does achieve, though, is to neatly give Cuddy a real reason not to be there when season eight gets underway, meaning they can write her out now that Lisa Edelstein's not coming back. A girl can put up with so much, but the last time I ram-raided an ex's house, I didn't hear much from her after that.

So let's not compare it too unfavourably with other season finales. I've thought House was jumping the shark a few times before, and been proved wrong just as often. That's what it says in my spreadsheet anyway.

I don't really have a spreadsheet.

More:  House  Hugh Laurie  Lisa Edelstein  Sky 1  Fox
Follow us on Twitter @The_Shiznit for more fun features, film reviews and occasional commentary on what the best type of crisps are.
We are using Patreon to cover our hosting fees. So please consider chucking a few digital pennies our way by clicking on this link. Thanks!