How I Spent My Summer Vacation

Well, I think we can all guess how Mel Gibson spent his summer vacation, amirite? Yelling anti-Semitic accusations into the voicemail of someone with tabloid connections? Drunkenly embarking on a tirade of racist and domestic abuse against his ex-wife? Playing Grand Wizard at a clan rally gathering before a burning wicker effigy? Right, I'm out. Shall we get on with the film?

Like last year's poorly-received, post-scandal dramedy The Beaver, this film comes at a time when Mel Gibson's popularity is at rock bottom. Unlike Jodie Foster's misjudged malady movie, however, How I Spent My Summer Vacation (a terrible homework-esque monicker that's far worse than its original title 'Get The Gringo') actually goes some way to falter the downward spiral of his career. You may not be able to see Mel as anything other than a belligerent old bigot at the moment, but there's no denying that this is a return to form for him, playing a hard-edged tough-nut with personality. And it's easily his most charismatic role in over a decade.

Gibson stars as a nameless professional criminal (nameless in that he relies on aliases throughout the film) who gets caught south of the border with holdalls full of stolen cash and is thrown in a Mexican prison. But as it turns out, Mexican prisons are like big shanty towns enclosed within high walls, with businesses making money, families running around and makeshift beds rented out as accommodation. Mel soon makes friends with 9-year-old Kevin, a jail-savvy kid who helps him to learn the rules in this tough new arena and who has a revenge-fuelled agenda of his own. 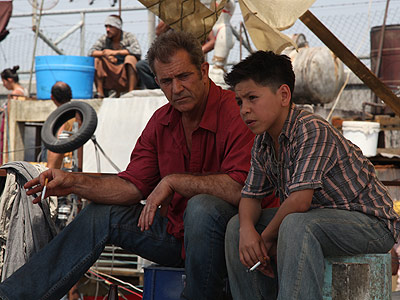 You can tell he's jail savvy because he SMOKES.


Thankfully, this isn't a lesson in how a cold-hearted thief goes soft and learns how to love – sure, Gibson's calculated crim grows attached to his new Shortround-esque sidekick (and the boy's mother – wink, wink) but this just shifts his priorities. He is still very much a man with his eye on the prize of breaking free, and he's ruthless in accomplishing that. What makes this film all the more entertaining though is that, with no back story given to Mel's character, we immediately understand that he is a well-experienced, resourceful man, securing a gun and a pot of money early on in his stay at El Majesty's convenience and shooting straight for the top of the food chain (that big gangster type fellow in the dressing gown, puffing cigars).

Perhaps more important is Adrian Grunberg's direction and Benoît Debie's cinematography. Despite serving as assistant director on films such as Man On Fire and Traffic (as well as a few Gibson films), this is Grunberg's first effort as head helmer and it's shot with the kind of gritty authenticity that all films set in Mexican prisons should have by default, while being offset by short bursts of action and Gibson's unmistakeable charm. As a result, it feels true-to-life despite actually behaving like a crime caper, with several story strands interweaving and coming to a head. And it's short. Don't judge me for being relieved at this, but this is a tight, tense thriller that could have easily fallen into flabby territory if was made any longer than its swift 95 minutes. 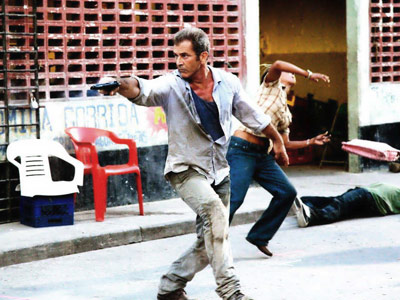 
So well done, Mel. You are good in this film that I saw. Just don't think that this lets you off the hook for all those horrible things you said. You have to make at least two more films as good as this before we forget all that stuff.

More:  How I Spent My Summer Vacation  Get The Gringo  Mel Gibson  Adrian Grunberg
Follow us on Twitter @The_Shiznit for more fun features, film reviews and occasional commentary on what the best type of crisps are.
We are using Patreon to cover our hosting fees. So please consider chucking a few digital pennies our way by clicking on this link. Thanks!