I Give It A Year

I gave it half an hour. 30 minutes is more than enough time to establish whether or not you're going to like a film and its protagonists: if you're not on board after the first act, chances are the second and third acts aren't going to be to your tastes either. To its credit, I Give It A Year starts where most romcoms end: the happily-ever-after wedding between its two leads – writer Josh (Rafe Spall) and prissy ad agency miss Nat (Rose Byrne) – mercifully sparing us the agonisingly tedious meetcute routine and fast-forwarding straight to the good bits i.e. the bickering, the adultery and the break-up. In other words, the bits romcoms are otherwise scared to show.


All I ask of a comedy – whether romantic or not – is that it makes me laugh. The plot, the characters, the cast? They're all secondary to how funny the film is: I'll forgive a lot for a laugh. In I Give It A Year's case, that's just as well, because there's barely a likeable character among the roster: Josh and Nat are clearly ill-suited to one another (he's a bit lazy! She's a bit uptight!) but the difference here is that the movie knows it and wants you to know it knows it. Here we have an adult comedy – admittedly with a streak of childish humour running throughout – that dares suggest that love is not always eternal. As it happens, that's a goldmine of untapped comedy potential. 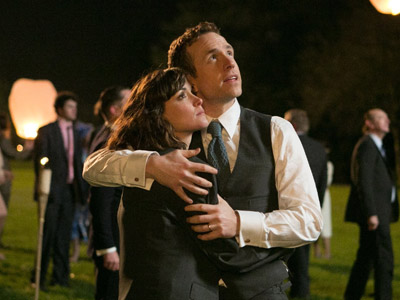 "Trust me. I was in Prometheus."


I Give It A Year is a film whose highlights are in its set-pieces, and there are many. Tim Key is excellent as a life insurance salesman with an inappropriate line in questioning; Minnie Driver and Jason Flemyng are superb as a bickering married couple who use a game of charades to passive-aggressively demean one another; Simon Baker balances the smarm and charm to play Nat's love interest, who releases live doves in order to woo her, only to see them shit on her neck. And then there's Stephen Merchant, who plays Stephen Merchant, who has somehow become trapped in a film.

If the film's tone wavers from one moment to the next - from serious relationship movie to knockabout romcom to Anna Faris sex comedy - that's simply writer/director Dan Mazer refusing to stick to one genre: why can't a romcom have bits that appeal to both male and female audiences? There are bum notes (Olivia Colman's therapist veers a little too close to caricature; there's a propensity to aim for sex gags over any other), but generally the quality of the writing is sharp and the jokes are at least 2:1 hit to miss. There are at least 10 genuine, laugh-out-loud moments, which more than meets my quota. 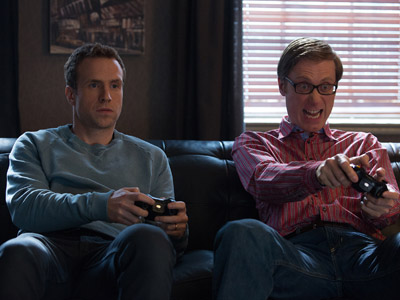 Movie pet peeve: you can't play videogames by mashing ALL the buttons. GOD.


While there are a few scenes that edge towards sappiness for the sake of balance (someone has to love someone), generally Mazer's script steers clear of cliché where possible, particularly as his film gathers pace towards a delightfully subversive finale. There is a wonderful moment at the climax of the film, which I won't spoil, that is uniquely British: an apologetic comedy of manners utterly unsuited to the romantic situation. It's a neat twist on the old 'last-minute dash to the airport' trope that's typical of I Give It A Year: embracing the familiar while still managing to mould it into something new.

More:  I Give It A Year  Dan Mazer  Rafe Spall  Rose Byrne  Stephen Merchant  Minnie Driver
Follow us on Twitter @The_Shiznit for more fun features, film reviews and occasional commentary on what the best type of crisps are.
We are using Patreon to cover our hosting fees. So please consider chucking a few digital pennies our way by clicking on this link. Thanks!