I Saw The Devil

Unlike their most excellent cuisine, Koreans seemingly prefer their revenge served cold. I'm hardly the world's foremost expert on Asian cinema (nutshell CV: hated Ringu, loved Audition, pretended to get the references in Kill Bill) but it seems like the revenge flick is a genre that's far better catered for in the East - they gave us Sympathy For Mr Vengeance, so in return, the West gave them Faster, starring Dwayne 'The Rock' Johnson. No contest.

So here we are: I Saw The Devil. A Korean revenge tale directed by Jee-woon Kim (him who made The Good, The Bad And The Weird), starring Byung-hun Lee (him who demanded justice in A Bittersweet Life) and Choi-min Sik (him who sought vengeance in Oldboy). It's fair to say it's got the pedigree of quite the angry crossbreed, and it both barks and bites like a rabid fucking animal. 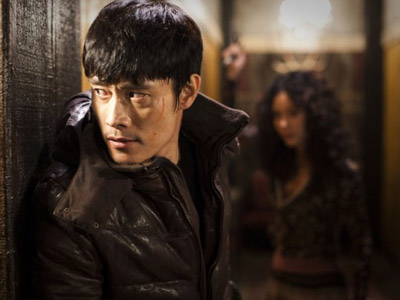 Byung-hun Lee was also in GI Joe, for which he is currently seeking revenge.


The set-up is pleasantly uncomplicated. When a serial killer lops the head off a young girl after a tense opening roadside encounter, he incurs the wrath of her policeman boyfriend (Byung-hun) who takes two weeks off work (paid leave, presumably) in order to hunt him down. But this is no mere game of cat and mouse. Here, the cat chases the mouse, claws him half to death and then lets him escape, purely so he can prolong his torture and get the revenge he feels he deserves. It's no more clever than its concept suggests, but it does lay the framework for what's basically a thumping series of unbelievably violent encounters, each more uncomfortable to watch than the last.

Needless to say, there's a fairly transparent subtext running throughout that questions who the real psycho is, but you don't need to spend too much time moralising each character's actions if you don't want to: it's a lightning-quick, fearsomely savage fight 'em up if you fancy viewing it on surface level alone. The two leads make for fascinating opponents; Byung-hun has a quiet intensity that just about keeps him on side, while Choi-min Sik makes for an utterly despicable screen bastard - a cackling, disgusting, terrifying villain who displays flashes of John Doe-esque calculated evil. 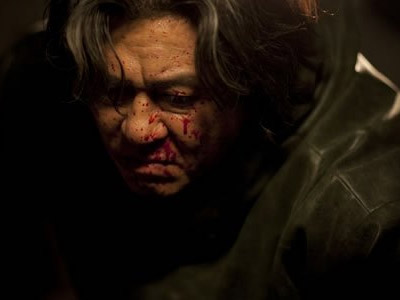 
It's the kind of story that leaves you thoroughly drained at its end; it's genuinely an ordeal to experience and you'll want to hop straight in the shower come the closing credits. I Saw The Devil is a fearless film, full of ugly violence that may make you wince more times than you might like.

But see past the pools of blood and the wrenches to the nuts and the questionable rape scenes and you'll see a revenge flick that's just about as uncompromising as anything I've seen come out of Asia in the last decade or so. Granted, that's not saying much with my credentials, but just trust me on this one.

More:  I Saw The Devil  Choi Min-sik  Lee Byung-hyun  Kim Ji-woon  Casual Racism
Follow us on Twitter @The_Shiznit for more fun features, film reviews and occasional commentary on what the best type of crisps are.
We are using Patreon to cover our hosting fees. So please consider chucking a few digital pennies our way by clicking on this link. Thanks!