I haven't seen The Fall, which everyone raves about, and I've read enough reviews of The Cell to know it's not worth watching, but Tarsem is nonetheless a guy who knows how to make a film look pretty. The first scene of Immortals confirms that fact. Deep in the bowels of Mount Tartarsaus (or something) lies a stone prison; inside are the Titans, locked inside, their skin ashen, their teeth clamped around their bars. In walks a muscular figure, wearing a gnarled, bronze helmet, who fires a bolt of energy from his bow to release them in an explosion of screaming fury.

It's a incredibly stylish opening, shot in stunning 3D – a bold statement of intent. Shame it's all downhill from there – nothing matches it for ambition save for the very last scene, which you've basically already seen in the trailer. Everything in between feels a little sallow in comparison. 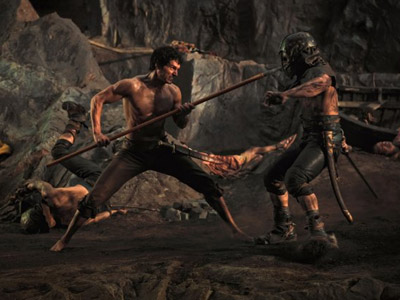 
The first half of Immortals is a right old plodder. Meet Theseus (Henry Cavill, giving his Kryptonian ab-blaster a good workout), a simple townsman who loves his muvva and also happens to be INSANELY BUFF and best friends with Zeus' human form on Earth, which is obviously John Hurt. Before long, Mickey Rourke's barbarian King Hyperion has stirred some shit up, killed Theseus' mother and declared war on the Gods. Because they can't interfere with Earthly matters, Luke Evans and his INSANELY HOT god mates convince Theseus he can lead his men to victory and blah blah blah oracles and yadda yadda prophecies etc etc etc.

Suddenly, sword-fighting! Once Immortals punts the deathly dull exposition stuff into touch and gets with the clashing of the titans, it becomes far more enjoyable – probably because every just shuts the hell up. It's here Tarsem gets to flex his muscles, with a nice line in fast-then-slow-then-fast-mo beatdowns and all manner of stabbings (you'd be surprised how many ways a sword can enter a man's body).

It's all highly silly, obviously, but the fact it has the resolve to stick it out and take itself deadly seriously – way past the point of parody – is kind of admirable. Take the costume design, for example. It's pretty out there. The gods dress in costumes Lady Gaga would consider "a bit much", but at least they're original. The guy sat next to me at the press screening would burst into laughter every time Kellan Lutz's character Poseidon appeared on screen, wearing what looked like the metal framework of a posh John Lewis lampshade on his head. Every time. Fucking hi-larious. After a while, you should just get used to the movie's unique style. It's so easy to mock, but what would you prefer? Robes and and little hats made of fig leaves? Get with the times, guy sat next to me.

Cavill is the emotionless mannequin over whom all Tarsem's stylistic choices are draped. Theseus is a total non-starter of a character – an identikit chiselled hero in leather pants – but Cavill grits his teeth and sticks out his chin. Sadly, he has little to say – you could shred his cheesy dialogue on his rock-hard abs. Freida Pinto is equally ineffective, playing the 'mysterious and pointless soothsayer' role recently vacated by Gemma Arterton, but Tarsem knows how to make her look exotic and otherworldly. By which I mean naked. Meanwhile, Steven Dorff just sort of stands around, stinking up the place. Nice one, Dorff.

As no one has said since 2008, thank goodness for Mickey Rourke. As King Hyperion, Rourke is given free reign to chew as much scenery as he likes, and he rescues Immortals from one-star oblivion every time he smacks his lips. Hyperion is a nasty bastard; the sort of marauder who must have terrible trouble hiring henchmen as he goes through them faster than you or I go through Toffee Crisps. He's a right old charmer too, with nude girls slung strategically around his fuck hut. "I will cause you great discomfort," he growls to a female prisoner, "Discomfort unique to your gender." Yikes. Try holding in that shiver. He's even capable of exuding menace while wearing the kind of headgear that Katy Perry might wear ironically. 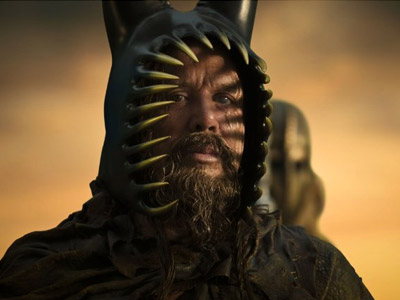 He killed a girl, and he liked it.


If you're capable of stifling your sniggers for an hour and a bit, Immortals can be hugely campy fun – it's a beautiful, if utterly vacuous experience, that makes 300 look like Spartacus. If you must be like the guy next to me and live so relentlessly in the real world, then yes, obviously it's ridiculous and a bit crap. But be warned: if you choose to be the latter and wind up sat next to me, I will tut at you for the whole film.

More:  Immortals  Tarsem Singh  Henry Cavill  Mickey Rourke  Freida Pinto
Follow us on Twitter @The_Shiznit for more fun features, film reviews and occasional commentary on what the best type of crisps are.
We are using Patreon to cover our hosting fees. So please consider chucking a few digital pennies our way by clicking on this link. Thanks!