In the Night Garden – episode 60

I watched this with my nephew at the weekend. He's eighteen months old. While he seemed to find it engaging enough, I felt it lacked narrative cohesion.

Well, there was some dancing.

Upsy Daisy, dancing. She does this a lot.
Key themes

Um ... mainly just the dancing, really. It was a fairly consistent motif throughout the piece. Actually, come to think of it, there was ... no ... no, it was pretty much just the dancing.
Vaguely serious bit

Here's the thing. My nephew likes to run around, make a lot of noise and stick his fingers in my nose. This is all great fun, but if you want him to shut his pie-hole for twenty minutes, you can just stick on Igglepiggle and the gang and he'll watch it in total silence. The effect is really quite pronounced. But then it is specifically designed to be soporific, as producer Anne Wood has said.

"
"
We became very aware of the anxiety surrounding the care of young children which manifested itself in all kind of directions – but the one big subject that came up again and again was bedtime. It's the classic time for tension between children who want to stay up and parents who want them to go to bed ... so this is a programme about calming things down whereas most children's TV is about geeing everything up!
And it's true that the whole show is about going to bed. Each episode constitutes a dream had by a different child, which is then summarised at the end by a big spinning gazebo, whereupon everyone lies down for some shut-eye. It's basically Inception without the CGI. And with a gazebo. 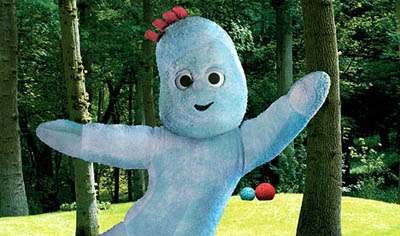 Igglepiggle. Not pictured: YOUR CHILD'S SOUL.

Anyway, it gets five stars because my nephew loves it. If you disagree, then you literally want to make a toddler cry. For shame.

More:  In The Night Garden  Childrens TV  BBC
Follow us on Twitter @The_Shiznit for more fun features, film reviews and occasional commentary on what the best type of crisps are.
We are using Patreon to cover our hosting fees. So please consider chucking a few digital pennies our way by clicking on this link. Thanks!