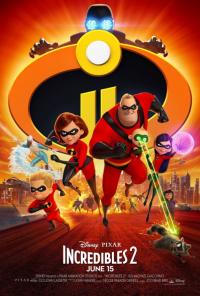 With more than a decade between Toy Stories or Finding Fish Characters, Pixar’s recent run of belated sequels is clearly part of a canny business plan rather than a sign of creative exhaustion, because these franchise returns do the job of appealing to both the original fans and a whole new generation of toy-demanders. If this has always been the strategy though, Incredibles 2 takes home the trophy for longest audience payoff of all time. Because, with the original film invoking everyone’s childhood fantasies of wanting to be superpowered, this sequel - delivered 14 years later - teaches those of us that have become parents in the meantime that our wish has been fulfilled: we now are heroes.


That’s the main message in this film, which picks up exactly where the last one left off. After Sokovia-levels of carnage and destruction occur in the wake of a superpowered rescue, the Incredibles are in need of a major PR upheaval. Superhero-obsessed wealthy investor Winston Deavour (Bob Odenkirk) then steps in, putting a plan in place to legalise Supers again, and it all starts with championing the press-friendly face of Elastigirl.

With Mrs Incredible away from home fighting crime, a pride-hurt Mr Incredible is left being a stay-at-home dad, struggling to look after the emotional needs of daughter Violet, the homework needs of son Dash, and the newly discovered multi-powered needs of baby Jack-Jack. The point is clear: mums are the real superheroes, and if dads can make the same self-sacrifice to be just as patient, organised and supportive, well then they can be pretty incredible too. 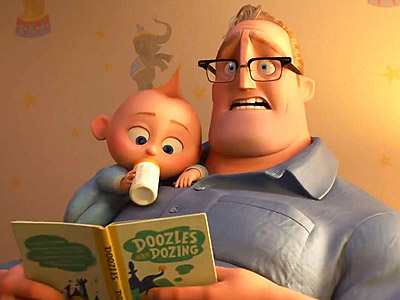 Relatability Score for Me and My Current Lifestage = 20/20.


Obviously this film isn’t just about the warm family feels though. With grandly staged action sequences and superpowered fight scenes boosted by rapid-fire inventiveness, The Incredibles still holds its own as one of the best superhero properties in cinema. Here the ante is upped with new tricked out gadgets, including a kick-ass Elastigirl bike, courtesy of Winston’s tech expert sister Evelyn (Catherine Keener), as well as the introduction of some new colourful crusaders, each with their own special abilities. The most entertaining of these is Voyd (Sophia Bush), a shy, nervy young woman with a fan complex for Elastigirl and the power to open teleportation windows from thin air, albeit not always on target.

And of course, there’s a new sinister central villain to contend with; a mysterious nemesis called Screenslaver, who uses TVs and computer screens to hypnotise anyone who might be watching. While this plays into themes of modern-day concerns like mind control propaganda and being glued to screens, it also adds an extra element of danger, as Screenslaver uses his hypnotised victims to do his bidding.

Still, we all know that all the action and superheroics are merely a framework on which to hang the real angle that Brad Bird is concerned with: family. And while the gender role reversal makes for a neat twist to explore, what we end up with are two very separate plots: 'The Secret Super Adventures of Mum' and 'Dad Learns A Lesson'. There’s so little interaction between the Incredible parents in this film, that actually all sense of a family unit is gone. And, as the plots develop and join up for the final act, there’s no major sense of reunion, no satisfying reaction for Mrs Incredible of Jack-Jack’s new powers, and not enough sense that the Incredibles are best when they are all working together as a team. 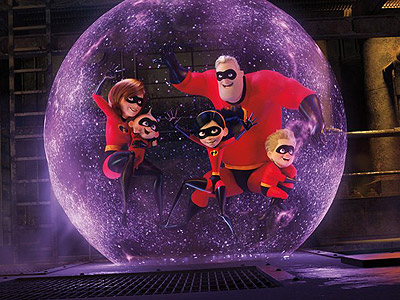 In one big, protective family bubb... you get the idea.


It sounds like a major complaint, but actually there are so many great gags and action scenes packed into the film, that it’s difficult to pay much notice to this issue. Instead, the film floods us with all the things that made us love the first film. Sometimes, you don’t realise how much effort has been put into world-building until you see another film set in the same world, and with this sequel it’s just a joy to be part of this super-stylised retro-futurist environment again, all scored by Michael Giacchino’s spy-tastic themes. That’s even before you get to moments of sheer brilliance, including one stand-off between a power-exploring Jack-Jack and a raccoon, which is essentially the best Pixar short Pixar never made.

So here’s hoping that the long-term strategy is to produce more films in the Incredibles franchise, because on this basis, there’s plenty more to explore in the superhero family set-up yet. Even if we have to wait another 14 years, by which time all the kids will have become teenagers, and all of us hero parents will have lived long enough to see ourselves become the villain.

More:  Incredibles 2  The Incredibles  Pixar  Brad Bird  Craig T Nelson  Holly Hunter  Samuel L Jackson
Follow us on Twitter @The_Shiznit for more fun features, film reviews and occasional commentary on what the best type of crisps are.
We are using Patreon to cover our hosting fees. So please consider chucking a few digital pennies our way by clicking on this link. Thanks!