By now you'll have heard that Inferno is awful, not that your hopes were high, and you don't need me to confirm it. Maybe the books make terrible source material, but come on, it's Hanks and Howard: how bad could it be? Well, not as bad as The Da Vinci Code, to be fair, but still pretty darned bad.


That someone bought the movie rights to Dan Brown's The Da Vinci Code in the first place is of course no surprise at all, no matter how bad it might be, because people generally tend to like money. But why Ron Howard wanted to make it, and Tom Hanks agreed to be in it, given that neither man has a history of making bad films for a payday, I can't figure out. Maybe they like a challenge. The sequels, given that the franchise is now an established property and can't really exist without its Langdon, are more obvious as choices. Hanks, perhaps, is conscious of the need to keep studios happy as he enters the elder-statesman phase of his career and wants to keep being offered roles of dramatic heft, so is canny enough to engage in a bit of quid pro quo. Maybe they just gave him a really nice typewriter; he likes those. 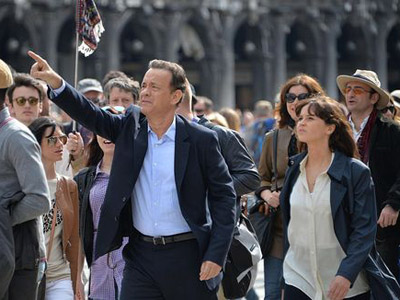 Hanks Around Europe, BBC Four, 9pm: Actor Tom Hanks's travels this week take him to Italy, where he points out and explains at length the significance of the gargoyles on the side of various cathedrals.


What is harder to discern is why they haven't punched up the script, when Hanks in particular is usually an inveterate rewriter of his lines. Here, Langdon is in hospital in Florence (he tells us this; he tells us a lot, actually) and Ben Foster was a TED Talk advocate of population culls for the long-term good of humanity but he just fell off a tall thing and died but he said there'd be an armageddon and it was all to do with Dante or something and here's Felicity Jones and everyone's chasing them. It is comprehensible, at least, where The Da Vinci Code was wholly impenetrable, and simple enough to follow on its top line: Big Virus Will Kill World Unless Symbol Man Solve Puzzles.

What's less clear is what in all fuck any of this has to do with Dante beyond a vague acknowledgement that his vision of Hell would be quite bad if it came true, or how the World Health Organization has the jurisdiction to despatch SWAT teams around major European cities. Fortunately, Robert Langdon is around to clarify stuff, and Jones's Dr Sienna Brookes is around to listen, because despite being a lifelong enthusiast of ancient symbology she knows nothing about Dante, or any of the various clues they find, and needs it all explained, which is awfully handy because neither do we. In narrative terms, when your hero could be replaced with Siri, you might want to think about another draft.

"Hero", though: there's the key word. Tom Hanks is not The Guy Who Saves the World, and casting him to find all the clues, dodge the assassins and escape the burning building misses the point of him entirely. He is supposed to represent me and you, and how we would like to think we'd react in his situation, by doing our goshdarnedest to muddle through it despite our limitations. 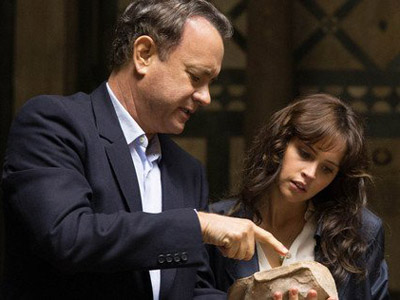 "Ah, now this, this is fascinating. See the inscription? Would've been done by the Benedictine monks of the 12th century. Interestingly, the monasteries at the time were entirely self-sufficient, relying on the timber trade and livestock farming to-"
"Uh, mate, the virus thing?"


Because he is physically incapable of giving a poor performance, he recognises this and always plays Langdon as out of his depth, never making him confident around gunfire or adept at chases. But he can't free the story from the prison it's built for itself, which is that Langdon is not a character so much as a device for exposition, and that he is, in truth, a bit of a dick. When he and Brookes realise where they need to go to find a thing, he says: "We're not just in the wrong place. We're in the wrong country. It's in the Hagia Sophia. In Istanbul." There is a beat and I swear to God I thought he was going to follow up with: "In Turkey."

Look, it's not all that terrible. If you want a conspiracy thriller that doesn't have much of a conspiracy in it but behaves like it does, in which a man and a pretty doctor get chased a bit while they look for a thing, it'll get you from A to B without confusing you too much along the way. But like the rest of the franchise it hopefully brings to a conclusion, it is a baffling anomaly for its director and star, both of whom otherwise have a far better knack than most for choosing projects that manage to be both commercially viable and creatively worthwhile. That's the greatest puzzle of all.