Instead of the usual screening experience hobnobbing with other critics and bloggers, Ali and I attended a special showing for Insidious that was filmed so that they could use shots of a glowy-eyed jumpy audience in TV trailers. Now that these ads are actually running on the box, it comes as no surprise to us that our mostly bored, sometimes laughter-stifling, mugs are nowhere to be seen in them.

The TV trailers are, however, as much of an indication of the film’s ‘jumpy shocks’ style as the credits attached to it: written and directed by Saw franchise starters Leigh Wannell and James Wan, and produced by Paranormal Activity writer and director Oren Peli. And it’s a good thing that we have these things in place to tell us what kind of film this is because, let’s face it, the word Insidious is just a title that SOUNDS THREATENING but DOESN’T REALLY MEAN ANYTHING to Average Joe Cinemagoer.

The plot is simple enough though – Patrick Wilson is a troubled husband of stay-at-home composer Rose Byrne and father of two annoyingly named kids, Dalton (Simpkins) and Foster. But then, Dalton inexplicably slips into a coma and, three months later, spoooOOOoooky things start to happen, leading Rose to believe that the house is haunted. After a while, the family move to a new house but the spoooOOOoooky things continue and, before long, they consult a strange woman, an expert in paranormal goings on, who explains that their kid’s spirit has wandered into an otherworldly existence called ‘The Further’ and other spirits are now trying to climb into his body. 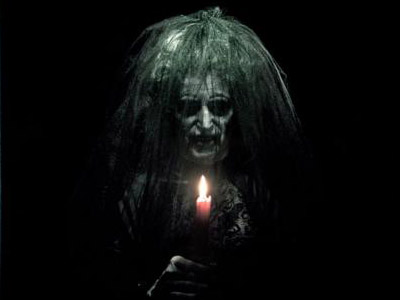 That’s your mum, that is.

So, even with the ridiculous sounding ‘Further’, the story is standard horror fare, but this film actually plays out in what seems like two halves. The first takes its cue from Paranormal Activity, with lots of ‘sudden shadowy figure hiding behind a curtain’ moments and, for some reason, a small dancing manchild. With these jumps and scares, the film actually proves rather effective as a typical cinema shocker, but then, having started off with a high fright level, the film has nowhere to go other than just get more extreme, meaning that the second half of the film, which Ali later declared is “about as subtle as a fart at a séance” (he wanted to be credited for that), dives off into the deep end of utter absurdity.

The film’s climax is the biggest let down of all as the ultimate ‘big bad’, some kind of malevolent demon with Darth Maul’s red face tattoos, is shown in all his glory menacingly sharpening his claws in a pointless workshop in The Further...and is essentially just a guy in a silly suit. This Darth Sidious is supposed to be the ultimate scary monster in a film full of freaky horrors but ends up just looking like a character from The Mighty Boosh. 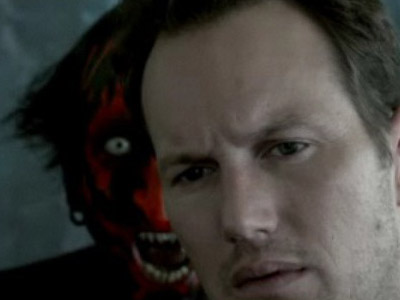 The film isn’t a complete loss – between the early shocks and some genuinely funny moments courtesy of writer Leigh Wannell’s role as Specs, one half of the bumbling paranormal team hired to help the family, there’s some degree of entertainment on hand. However, it fails to deliver in its most important aim: to be even remotely scary for the majority of the film, and this is even with some seriously overwrought violins on the score trying so desperately hard to be dramatic and tense.

And so, if you ever catch one of the TV trailers for Insidious, don’t even bother looking for us on it because we clearly didn’t give the desired reactions. But I like to think that the editors of those ads, at one point, saw us remain stony-faced throughout what was supposed to be a jumpy scene, and thought “Oh god, I can’t use that, it’s terrible!” – something that the filmmakers really should have thought more themselves during this film’s production.

More:  Insidious  Patrick Wilson  Rose Byrne
Follow us on Twitter @The_Shiznit for more fun features, film reviews and occasional commentary on what the best type of crisps are.
We are using Patreon to cover our hosting fees. So please consider chucking a few digital pennies our way by clicking on this link. Thanks!