Moon Nazis are coming! Actual 'Moon Nazis'. Space Nazis from the moon. When you have a premise that's clearly a slice of pure fried gold, who needs a big blockbuster budget? Or A-list actors? Or really funny jokes? Or a good script. Or a story that makes sense. Or 'entertainment'. Erm...


It's always going to be difficult to critique a film that's deliberately trying to be bad. Iron Sky's concept alone is a built-in disclaimer for its quality but, for all the 'B-movie spoof’ good intentions, the film soon gets caught up in its own ridiculousness and forgets what it was there to do in the first place: to entertain. Basically, any goodwill you have towards the idea of Swastika-shaped space stations and Moon Führers will only last about 20 minutes. After that, you have a plot to follow.

And what a plot. The year is 2018 and a Sarah Palin-esque President of the United States decides to send a black man to the moon to try to garner good publicity ahead of the forthcoming re-elections. The man in question, James Washington (Christopher Kirby), stumbles upon a hidden Nazi moonbase created during WWII. Taking Washington's arrival as being a scouting mission ahead of Earth's imminent invasion, the Nazis decide to attack first and send an armada of flying saucers and space zeppelins to reclaim the world. And never will I write a plot summary more batshit mental than that. 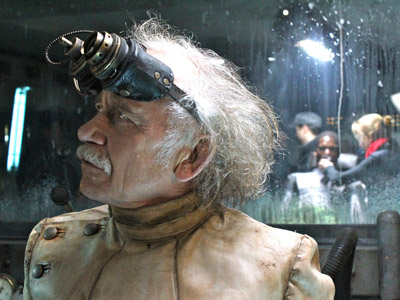 And I haven't even mentioned this guy.


The film manages to get by on sheer audacity for quite a while before it runs out of shock juice. Astronazis wearing recalibrated gas masks, the scale of the base and its population, the repurposed school lesson taught by heroine Renate Richter (Julia Dietze) and the hilarious racial stereotyping of Washington (when he first sees the Moon Nazis, he exclaims "Man, you gotsta be trippin'!") all win early points for the film.

But then once all the introductory goose-stepping fun wears off, we're left with a nonsensical story, unfunny characterisation and plot contrivances that will leave you wishing that this whole thing was just a long comedy sketch. Unfortunately, the film tries to rely on the enthusiasm of its audience to gloss over the cracks. For example, in the final scene, a main character re-appears with no explanation as to how he got there - oh well, just shake your head and put it down to B-movie hijinks. 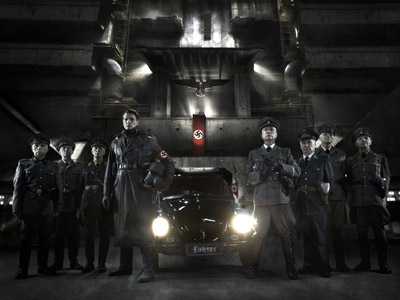 
At least the special effects are budget impressive, being as highly polished and spectacular in scope as anything from a decade-old blockbuster such as Armageddon. This says something either about how some remarkable FX was created on stretched-thin finances, or simply how far CGI has come in the last 10 years. Either way, it adds welcome sparkle in an otherwise amateur-looking effort.

Overall though, shock horror: hilariously terrible-sounding movie ends up being nowhere near as fun as you might hope. This does not bode well for my time-travelling monkey idea.

More:  Iron Sky  Timo Vuorensola  Nazis
Follow us on Twitter @The_Shiznit for more fun features, film reviews and occasional commentary on what the best type of crisps are.
We are using Patreon to cover our hosting fees. So please consider chucking a few digital pennies our way by clicking on this link. Thanks!