It Comes At Night

The real monsters are inside us, you know. For example, there’s a demon that lives inside of me that comes out after approximately 3 glasses of Chilean chardonnay. Aside from my semi-serious drinking problem, It Comes At Night teaches us that any external creepy threats are nothing compared to the horrors at home. Yeah, think on that.


It Comes at Night also asks the question: "How far would you go to protect your family?" In Paul's (Joel Edgerton) case, it’s as far as bundling up his wheezing father-in-law covered in scabs, throwing him into a shallow grave in the garden and shooting him in the head before burning his body. Fam, it’s lit. It's ok though, because his wife's (Carmen Ejogo) dad was infected with some kind of plague that gives blemishes no amount of BB cream is going to cover, and causes a gooey black dribble that was giving their son, 17-year old Travis (Kelvin Harrison Jr.) nightmares. So they had to dispose of grandpa for the sake of the family.

Living in complete isolation, the trio don gas masks and stalk about with fully loaded guns every time they venture beyond the red door to their barricaded homestead that is crucially, always locked. What menace is looming in the woods ready to spring this contagion upon them isn’t exactly clear. Is it zombies? Infected monkeys? Murderous plants intent on taking back what’s theirs? There’s scant information to go on and there are no helpfully timed television broadcasts or newspapers lying around. The virus (if that’s what it is) is not given a name, nor do we know where it came from or how much of the world has been affected. 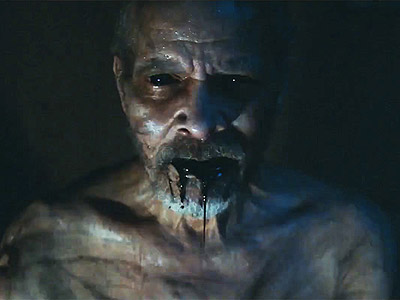 Or maybe everything is normal and no one has noticed?


That is until an outsider named Will (Christopher Abbott, aka Charlie from Girls) crashes in, claiming to be looking for water for own wife and son. Paul’s initial reaction is to tie him to a tree overnight, watched on in quiet horrified fascination by Travis. Is this a justifiable reaction to the desperate situation they’re in, or is Paul’s heavy-handedness a hint at how far someone will go, all in the name of family?

When Will’s wife (Riley Keough) and their young son Andrew arrive, tensions rise and something else begins to haunt Travis’s dreams. By now we realise, as with many horror films, daytime is good but when night comes, that’s when things (literally) get dark. Rattling doors, raging hormones and haunting memories of goopy grandpa do not a good combination make.

Director Trey Edward Shults presents the oddly blended family in a vacuum, and is wise to ration the schlocky jump-scares, leaving a thick sense of dread to hang in every scene. It’s not an easy task to subvert horror norms, and while he’s not exactly bringing anything new to the party, each second feels like an hour and we hang a little too long in every frame, adding to the sense of unease. 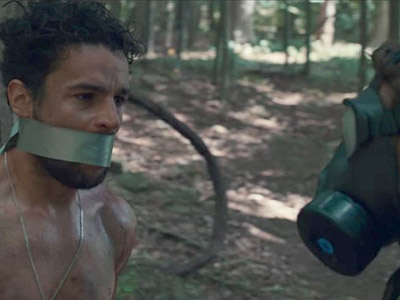 Because without that, this would seem perfectly normal, obviously.


That’s not to say it’s not heart-thuddingly scary: Travis’s nightmares are incredibly creepy, aided by great editing and sound direction, and the lack of context means that when "It" comes, it could be literally be anything. The film plays with psychological terrors as much as traditional horror tropes, the really frightening stuff being only limited by what you can imagine. A special mention goes to Harrison Jr. whose reactions to off-screen horrors are superbly nuanced (he actually, genuinely looks properly scared). It’s his Travis who acts as the bridge between the two families and acts as our eyes to the horrors that are unfolding around him.

The pacing and lack of gore/information might not play well with a mainstream crowd, but Shults’s drawing out of tension without relying on clichés makes for a fascinating (and sweaty) watch. The world outside is a scary place, but it’s what’s inside that’s scarier.

More:  Joel Edgerton  Christopher Abbott  Carmen Ejogo  Riley Keough  Kelvin Harrison Jr  Trey Edward Shults
Follow us on Twitter @The_Shiznit for more fun features, film reviews and occasional commentary on what the best type of crisps are.
We are using Patreon to cover our hosting fees. So please consider chucking a few digital pennies our way by clicking on this link. Thanks!