I reckon the best way to get the measure of a new horror film is to test how easy it is to replicate the scares in your own home. For example: to 'Blair Witch' someone is to stand motionless and in silence while facing a corner; to 'Body Snatch' someone is to point at them and scream; to pull a 'Paranormal Activity' is to stand next to someone as they sleep and watch them lose their shit when they wake up. The best horror movies tap into something dark and primitive that lurks in us all. It Follows is one such horror movie and contains a core DIY scare tactic that can be replicated by anyone at any time - one that can turn even a well-lit, friendly afternoon picnic into a pant-stained arena of terror.

Slow walking. Not running, not T-1000-esque striding, not zombie-staggering - although It Follows is the definitive argument for Romero's "slow" zombies: your demons always catch up with you in the end - just purposeful, relentless walking towards a terrified human target. The malevolent force in It Follows which stalks our group of heroes over 100 minutes takes a number of forms (nude woman, creepy old lady, Lurch, rat kid), but it doesn't even need to be on screen to be scary. Because you know that even when the kids escape it, it's still out there, somewhere. Following. This is horror boiled down to its bones. 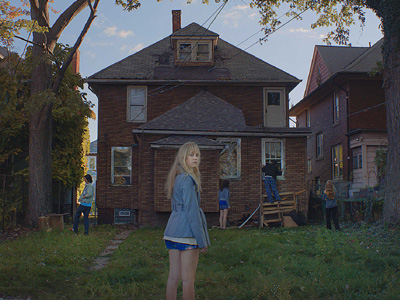 "I see no reason not to investigate this creepy domicile."


The best place to pitch It Follows is somewhere at the junction of Invasion Of The Body Snatchers, The Terminator and John Carpenter's Halloween: it has the feel of a late 70s/early 80s grindhouse project, and not just because of the period setting. In setting up camp in horror's most fertile era, director David Robert Mitchell probably also owes a debt to Ti West, with The House Of The Devil the most obvious comparison; star Maika Monroe (from fellow 80s throwback The Guest) even looks a little like Greta Gerwig. Mitchell is so dedicated to authenticity, he apparently travelled back in time to cast a young Johnny Depp (complete with lank hair and pale denim), only here he's called Daniel Zovatto for some reason. 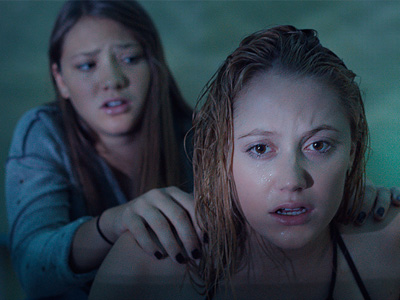 "Yes, now would be the perfect time to go swimming."


The period setting isn't just for show, either. Firstly, it contextualises the profoundly odd digi-score by composer Disasterpeace, a shrill, fearsome soundtrack that sounds like Bernard Herrmann filtered through a Moog. Most importantly, the 80s setting makes narrative sense in the world of the movie: the only way to stop 'it' from 'following' you is to have sex with someone and let them deal with it - a selfish act befitting a selfish decade. It may as well be called 'AIDS: The Movie'. Monroe is your quintessential 80s horror victim, too; a gymslip blonde with doe eyes and burgeoning womanhood, she's essentially punished for having sex like most scream queens, except here it's part of a sly commentary that shines a light on the sexist roots of the genre from a safe distance.

It Follows plays like a nightmare. It's abstract and impossible but somehow very real and very scary. It is full of striking and upsetting imagery (one 'follower' is a girl wearing a cheerleader costume with a beaten-up face and urine dribbling down her leg) which it deploys in unusually serene settings (i.e. the beach in broad daylight). It's a movie that pins you back in your chair and rams your eyelids open with metaphorical matchsticks. It Follows taps into a primal echo of paranoia; a mistrust of strangers that never truly fades. Needless to say it's the perfect film to give you ideas if you want to scare the shit out of someone.

More:  It Follows  Maika Monroe  Keir Gilchrist  Daniel Zovatto  Horror
Follow us on Twitter @The_Shiznit for more fun features, film reviews and occasional commentary on what the best type of crisps are.
We are using Patreon to cover our hosting fees. So please consider chucking a few digital pennies our way by clicking on this link. Thanks!