One of the cardinal sins of film journalism is that you must never call a film 'boring' – professionalism dictates that there must be a more accurate way of singling out the movie's flaws; a more apt way of summing up why it disappoints. A dull script, perhaps, or flat performances. But no. There is no better way to summarise the ways in which Clint Eastwood's Hoover biopic fails: J. Edgar is just fucking boring. It just is. It looks boring, it sounds boring, it feels boring, it IS boring.


You wouldn't say it to his face, unless you wanted to be kicked over the nearest fence, but Clint Eastwood is in a major slump. The multi-Oscar-winning directorial genius of Unforgiven and Mystic River has made four fundamentally bad films on the trot: mawkish melodrama The Changeling; odd-shaped sports drama Invictus; criminally dreary tsunami ponderer Hereafter; and now this, a brown, corduroy biopic of the man who created the FBI and shaped American law and order. Billed as 'The Most Powerful Man In The World', Hoover has been lumped with a saggy life story that doesn't even have the decency to have any fun with the good bits. 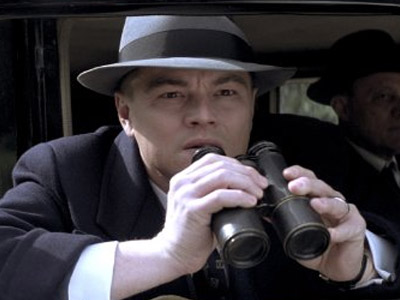 "Slow down, driver. Roosevelt just got out the shower."


As you've no doubt already seen from the trailer – and the merciless mocking dished out by this very website – Leonardo DiCaprio plays Hoover from a jaw-jutting mummy's boy to liver-spotted nosey old geezer via a variety of haircuts and prosthetics. Yes, that's baby-faced Leonardo DiCaprio, who until recently looked like a bum-fluff teenager wearing his dad's clothes, playing a septuagenarian. While he does good work establishing Hoover in his younger years – whether out-weirding Norman Bates in the 'yes mother' stakes or fumbling for a kiss from lifelong friend Naomi Watts, incidentally the most ineffective female character since Cameron Diaz in The Green Hornet – DiCaprio's performance loses traction the older J. Edgar gets. The more rubbery the mask, the more it slips.

Hoover is prime biopic material: a knot of contradictions, he was a private man who effectively outlawed true privacy. With the benefit of distance, Eastwood could have pried open Hoover's most secret files to expose the truths within, but Dustin Lance Black's screenplay merely tip-toes around the scandals – his closet homosexuality for one, his penchant for cross-dressing for another, and that's without even mentioning his continual bending of the rules. Nope: all you get here is a chilly relationship with Armie Hammer – officially The Most Freakishly Handsome Man In The World – a bizarre scene with a dress that feels spliced in from a slasher movie, and a few 'copied files' and raised eyebrows (or at least, they would be raised if they weren't stuck on with industrial strength glue).

The shit-kicking, tar-spitting Clint Eastwood that directed Unforgiven has left town. The ghost that remains has developed a taste for shooting well-dressed men sitting in poorly-lit rooms. J. Edgar is a shockingly bland film to look at: the bleached colour palette means you get shades of grey in the set-dressing when they should be in the screenplay. Just look how brown these thumbnails from IMDB are. 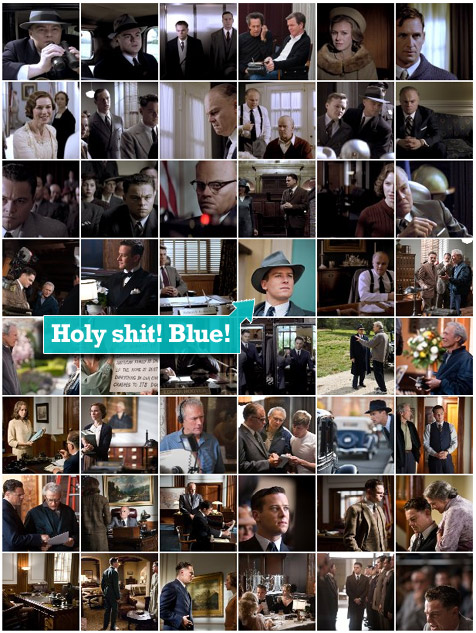 It's the worst kind of movie; a blatant Oscar grab that mistakes glacial pacing and stony performances for awardworthy material. If it's nominated for anything other than Best Make-Up – which, obviously, is terrible – then I'll be surprised. Armie Hammer as an old man looks like Grandpa Simpson crossed with a ballbag. Not what you'd call a 'prestige' picture.

What should be a fearless, fascinating account of a man with a thousand stories has ended up a flat, flavourless exploration of none of them. Issues that should be prescient – National security! Privacy! Corruption! Homosexuals! – are fumbled and lost in a scattershot script that can't find a hook. Drab, dour and s-l-o-w, I can think of few reasons to recommend it to anyone – truly, this Hoover sucks.

More:  J Edgar  Clint Eastwood  Leonardo DiCaprio  Armie Hammer  Naomi Watts
Follow us on Twitter @The_Shiznit for more fun features, film reviews and occasional commentary on what the best type of crisps are.
We are using Patreon to cover our hosting fees. So please consider chucking a few digital pennies our way by clicking on this link. Thanks!