I still maintain that the first Jack Reacher is a decent action film, and one that has fun with tropes and clichés of the genre. Obviously, not everyone agrees with me, but I think ultimately I've been proved right. And in that sense, the original controversy surrounding Tom Cruise’s casting as Reacher didn’t make sense to me. As I’m not beholden to the source material in any way, Cruise seemed perfect as the all-star action guy with the charm and wit to carry through the self-aware humour. But, as there’s none of that here, this might just be the first instance of an actor being miscast in his own sequel.


Again, while not familiar with the books, this film seems to be an attempt to address that controversy and re-align Cruise’s portrayal with the character on the page. And this means subtle shifts towards being more muted, grizzly and gristlier. This Reacher is taciturn; still cool and calculated, but non-committal in response. He's slightly more burdened with world-weariness this time round and his judgement swings more towards cynical than clinical. In short, this is a role better suited to someone like Idris Elba than Tom Cruise, who is, by now, more headshot than man. 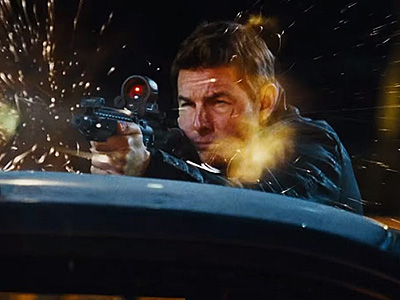 
It doesn't help that the character's relationships with his supporting cast in this film is also markedly different than before. In deciding to help his phone-friend, Major Turner (Cobie Smulders), after she is wrongfully arrested, Reacher ends up with a clear love interest during their investigation into the apparent military conspiracy at hand. Meanwhile, a teenage tearaway is targeted for supposedly being Reacher's daughter, something that he vehemently denies before slowly warming to the idea as he gets to know her.

With all three characters sticking together, the film explicitly plays with the idea of their supposed family dynamic, often aiming for laughs, but usually achieving only underwhelming scenes of mundanity. I can't be the only one who doesn't give a shit about seeing domesticity in a Jack Reacher movie. I have that at home. What I DON'T have at home is a guy getting his neck kicked off. And there's really not enough of that going on in this movie. 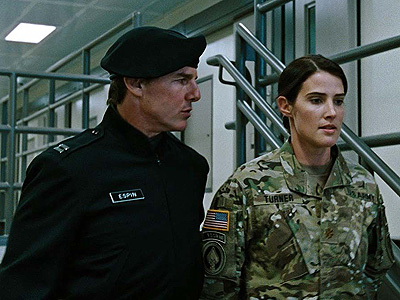 But there IS a lot of talk about military hierarchy, so that's good.


More importantly, what this set-up does is change how we watch and enjoy the character of Jack Reacher. There's fun to be had in knowing that he is the infallible, shit-hot super-agent in the room. In the first film, when six guys try to pick a fight with him, the point wasn't to think "oh god, what is Reacher going to do?". The point was to think "Yay! One of these guys is definitely going to get his eyes bitten off!". But introducing a love interest and a possible daughter into the mix gives Reacher an immediate weakness. Suddenly his judgement is impaired because he has deadweights to protect.

And yet they shouldn't be deadweights. Cobie Smulders' Major in particular is actually the film's high point, brutally beating anyone who gets in her way and looking every bit Reacher's equal in the action stakes. The problem is that, despite establishing her as Reacher's match, she then still gets sidelined all too frequently. To the film's credit, it does address this issue head on, with Major Turner arguing against having to babysit the teenager while Reacher continues the investigation just because she's 'the woman'. The decision is sexist she tells Jack, and she's right, particularly because she is more invested in the case than he is. 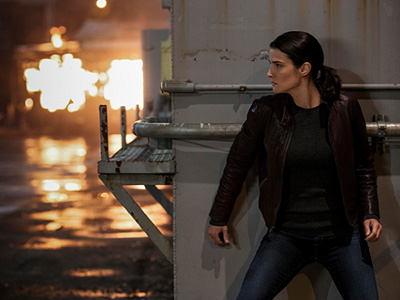 A woman's place is round the corner and out of sight.


But director and co-writer Edward Zwick still lets it happen. As if calling out the issue is enough for it to be forgiven. I'll be honest, at this point in the film, I was so much more interested in seeing Cobie Smulders kick ass than Tom Cruise. If we can start suggesting swapped gender reboots, let me be the first to make the case for Jackie Reacher. How refreshing would that be?

Because as far as generic Tom Cruise action flicks go, this is one of the most forgettable. Mostly because, in trying for substance, it completely lacks personality, which is the exact diametrically opposite ratio of Tom Cruise's role on this earth.

More:  Jack Reacher Never Go Back  Jack Reacher  Edward Zwick  Tom Cruise  Cobie Smulders
Follow us on Twitter @The_Shiznit for more fun features, film reviews and occasional commentary on what the best type of crisps are.
We are using Patreon to cover our hosting fees. So please consider chucking a few digital pennies our way by clicking on this link. Thanks!