Jack Ryan is unique in reboot terms, in that you could hardly call him a franchise: with four actors playing a single role over five movies, it feels more like a Doctor Who-esque regeneration than an attempt to rebuild the character from scratch. Despite his myriad abilities, Jack Ryan is not the most adaptable of fellows: there are few drastic differences between Chris Pine's interpretation of the Tom Clancy hero and Ben Affleck's take in The Sum Of All Fears. When you consider just how much America has changed in the last 12 years, in terms of global perception, geo-politics and national security, Shadow Recruit has to go down as a missed opportunity. Apart from an early nod to the September 11th attacks, it could have been written in 2004, 1994 or even 1984. It feels intentionally bland; homogenised so it can play to any audience at any time. Except Russians, obviously.


Shadow Recruit is almost insultingly unremarkable on a basic level. It has a pre-credits set-up (the aforementioned New York booboo), a meet-cute, a fight scene, a car chase, a BIG ACTION SEQUENCE and a highly implausible spy mission. It has a Russian villain so stereotypically Soviet you suspect he could turn water into vodka. It has Kevin Costner being all mentory. It has Keira Knightley being all smiley and lovely. And it has an incredibly average actor at its core. There is nothing about Jack Ryan: Shadow Recruit that is memorable. Even the nonsensical title feels like it was selected by committee.

For those who haven't had the pleasure of reading a Tom Clancy novel in an airport due to the complete and total absence of any other adult-based reading material, Jack Ryan is a super-intelligent analyst athlete who can think on his feet and also kick people in the face with his feet. I get none of this from Chris Pine. When Benedict Cumberbatch goes into Sherlock mode, I sense that the man is a genius; Chris Pine looks like he's still trying to figure out the plot to Star Trek Into Darkness. I can accept him as a cocksure Captain Kirk, who acts first and smarms his way out of trouble later, but I don't buy him as a polymath ninja rally driver. 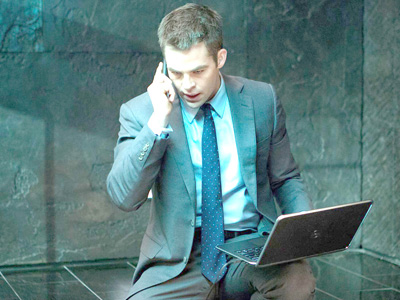 "Wait... the files are IN the computer?"


Frankly, Pine is miscast; a decision that's symbolic with everything that's wrong with big-budget blockbusters nowadays. Studios are always looking for younger actors they can tie into multiple-picture deals to hit all four quadrants, but Pine doesn't feel like he has the gravitas required of a Jack Ryan. You think of Baldwin and Ford and the experience they have etched into their faces. You think of Chris Pine and you think 'Hey, it's Captain Kirk!' He doesn't exude anything other than film star looks and feels less interesting as a result. Maybe it's symptomatic of starring opposite Kevin Costner, an actor who you genuinely buy has seen some shit. If the new Bond is a blunt instrument, the new Jack Ryan is a wooden spoon.

At least Kenneth Branagh's villain works hard to be memorable. As Viktor Cherevin, he is clearly striving to be voted the Most Russian Man Of The Year, ticking the boxes marked 'Ridiculous Accent', 'Vodka Drinker', 'Disdain Towards Henchmen', 'Love Of Opera Music' and 'Entirely Black Wardrobe'. All he needs is a parrot or a dwarf as his second-in-command, he's that comical; an intentional throwback to Tom Clancy's favourite temperature of war: Cold. Too bad Kenneth Branagh the director forgot to give Kenneth Branagh the actor anything interesting to do: his evil plot is scattershot and doesn't work nearly as well on film as we imagine it did on paper (hint: if you have to have someone talking over images of spreadsheets to explain your evil plot, find a new evil plot). 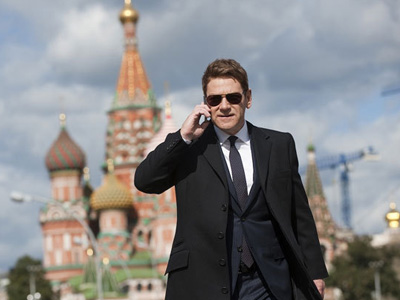 "Sorry, I was off my face on Stolichnaya."


Branagh leaves little in the way of a visual stamp on Shadow Recruit; his camera work ranges from embarrassingly static (at one point, Ryan and Cherevin stand still facing each other, clearly not knowing what to do with their hands) to impossibly frantic (an early chopper crash feels like it was shot by locking the cameraman in a Portaloo and pushing it down some stairs). The edit is lacking any fluidity too: there's a gag about a kidnapped dog which gets a laugh but doesn't have a payoff, and there's a thumping great plot hole regarding Branagh's evildoings going completely unpunished about two thirds of the way through. If only director Kenneth Branagh was available to work with actor Kenneth Branagh to fix it.

Maybe I just fell asleep and missed them. I'm pretty sure they're not in there, though. One thing I do appreciate is a good explosion.

In fairness, Jack Ryan: Shadow Recruit isn't a bad film per se, it's just about as hollow as it's possible for a modern blockbuster to be: shiny yet empty, fast-paced but with nowhere to go. Keira Knightley at least makes for a warm presence as Jack's other half, but the 'partner who wants to get involved in their other half's dangerous lifestyle' cliché is now almost as hoary as the 'damsel in distress' cliché (she's both, by the way). If I was pushed to find one compliment, it would be that Jack's frequent use of the phrase "Marry me, Cathy!" makes for a fun exclamation to try at home, in the same vein as "Jurassic Park!" and "Back of the net!"

Jack Ryan: Shadow Recruit shares the same haunted qualities as The Bourne Legacy: a sleek, streamlined action thriller that still feels like a copy of something better. In truth it's no better or worse than any other Paul Greengrass imitator we've tolerated over the years, but it's time to face facts: the world has changed since Tom Clancy's heyday and cinema doesn't need Jack Ryan any more.

More:  Jack Ryan  Jack Ryan Shadow Recruit  Chris Pine  Kenneth Branagh  Keira Knightley
Follow us on Twitter @The_Shiznit for more fun features, film reviews and occasional commentary on what the best type of crisps are.
We are using Patreon to cover our hosting fees. So please consider chucking a few digital pennies our way by clicking on this link. Thanks!