Having grown up in a small, middle-class Conservative-voting Cambridgeshire village, I’ve seen enough poorly-acted productions of Jack and The Beanstalk to know when something isn’t quite right. And "Fe-fi-fo-fum, ask not whence the thunder comes" isn't quite right.


Aside from cocking up one of the most iconic lines ever associated with a beanstalk, Bryan Singer gets almost everything else near enough spot on. By way of The Lord of the Rings, some 3D cameras and some impressive giants, the X-Man has brought the tale of Jack And The Beanstalk to life. and it's just how we always imagined it. Except maybe for Ewan McGregor’s quiff. I don’t think anyone expected that.

Taking the best bits from both the 'Beanstalk' fable and the darker 'Giant Killer' yarns, the story is comfortably familiar. After he is carelessly mugged off by a monk leaving him with a handful of beans and no horse, spirited young farmhand Jack finds himself up a magical beanstalk, knocking on the door to the mysterious "world beyond the clouds" in search of the adventure-seeking Princess Isabelle. In his quest, however, Jack inadvertently reignites a ferocious war between the humans and an army of gruesome, Davy Jones-sounding giants.

After the recent flood of moody, dark and gloomy fairytale retellings unashamedly cashing in on the Twilight crowd, it's nice to see one that manages to stay on the right side of fun. Never once taking itself too seriously, Singer's tall tale - much like Mirror, Mirror – brings with it a wonderful sense of child-like adventure and pantomime funnies. 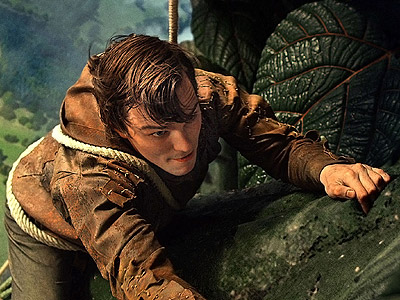 And lots and lots of exciting climbing scenes.


Nicholas Hoult, playing it loose and confidently, proves a solid choice as the unwitting hero Jack, while Ewan McGregor’s debonair king’s knight Elmont and Stanley Tucci's treacherous boo-hiss villain couldn't be more panto-friendly. We do have to wait a good half hour before we see our first glimpse of a giant, but this helps to build the tension. And when they do appear, they don't disappoint. Gruesome, clumsy galumphing beings – they're exactly how they should be.

Jack The Giant Slayer isn’t without its flaws though. Tonally, it's all over the place, jumping from slapstick LOLs to callous killings at a moment’s notice. One minute we’re giggling at McGregor covered in flour, wrapped in pastry, and the next we're suddenly stunned because someone has been swiftly gobbled up. And the cold-hearted deaths don’t end there – soldiers scream for their lives as they fall to their deaths, heads are bitten off and people are thrown over cliffs, flung about like toys and even trodden on. The level of casual violence in this film could be too gristly for younger children, and it certainly means that the odd joke doesn't quite sit right. 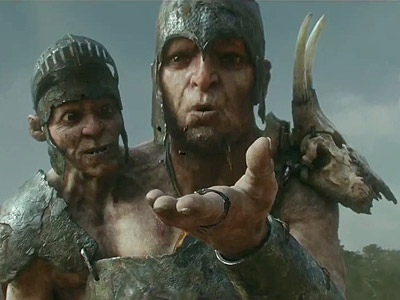 And the less said about the inappropriate kiss-blowing, the better.


Thankfully, the visuals helps to smooth things over, particularly when it comes to the big final battle, which boosts momentum after a midway lull. This is also where Singer really brings the noise: giants leap from the heavens, burning trees are flung, windmill blades are used as ninja stars, moats are filled with fire, and a whopping great beanstalk collapses, which oddly seems to surprise everyone, despite the fact they were already in the process of cutting it down.

Overall, there's an over-reliance on CGI (especially during the opening scene), the script struggles to compliment the action and the end isn't only ludicrous but will most likely freak out your kids. And yet, with a good-natured sense of adventure and a great deal of humour, Bryan Singer still manages to do enough to provide plenty of... are you ready for this? Are you sure? Oh, here goes... FE-FI-FO-FUN!

More:  Jack The Giant Slayer  Bryan Singer  Ewan McGregor  Stanley Tucci  Nicholas Hoult
Follow us on Twitter @The_Shiznit for more fun features, film reviews and occasional commentary on what the best type of crisps are.
We are using Patreon to cover our hosting fees. So please consider chucking a few digital pennies our way by clicking on this link. Thanks!