Look, this was always going to be a tough one to sell but hear me out: Jiro Dreams Of Sushi is a slow-paced documentary about an old Japanese man who is really good at making sushi and that's about it, and it's really... nice. Not doing it for you? Ok, er, Godzilla turns up halfway through and levels Tokyo! There's an explosion! It's in 3D! Maybe.


I really liked Jiro Dreams Of Sushi, although I'm not entirely sure why. Looking through my notes I've scribbled things like "nice old man", "quiet old man", "cooking", "fish, etc." - nothing particuarly exciting or world-changing. In fact the subject of the documentary - 85 year-old sushi master Jiro Ono - is completely at odds with my own personal viewpoint on life, choosing to spend every waking moment in the pursuit of further perfecting his sushi skills; whereas as I have the same enthusiasm for making an effort as a knackered sloth. 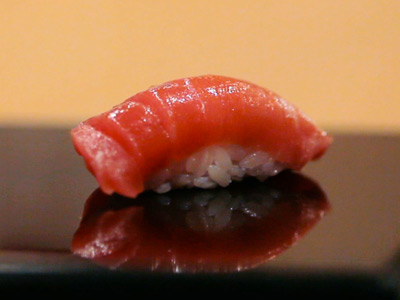 We're introduced to Jiro in his ten seat Michelin 3-Star restaurant. Jiro's mastery of sushi is so renowned that you have to book at least a month in advance. Meals start from 30,000 yen (about $340, or £210 in real money), and the only thing on the menu is sushi. No appetisers, no desserts. Not even a party crown on your birthday. If we were talking about Jamie Oliver or Gordon Ramsey your eyes would roll back in your head like a haunted doll. But there's something about this nice quiet old man who cooks fish that says "allow it".

As we come to learn, Jiro's skills are born from a life of Les Mis-level hardship. Abandoned by his father at the age of 7, and told "you have no home to come back to" at the age of 9, Jiro started an apprenticeship in a sushi shop simply to survive. Rising through the ranks of shokunin, Jiro's approach to hard work and dedication to serving the perfect dish would soon garnish him with a world-beating reputation, which he fiercely protects to this day. Although 'fierce' is a bit misleading.

There are many other sushi chefs who would no doubt like to topple Jiro, so it comes as a surprise how open he is on film about how he maintains his status: the key is simplicity. Besides the 70+ years of practice preparing rice and fish, Jiro has a network of loyal suppliers who provide him and his sons with nothing but the best ingredients - an essential starting point. Some of these suppliers are so loyal and reverent they refuse to sell to other restaurants. It's almost Mafia-esque. 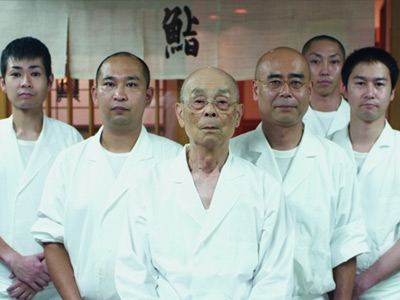 But, like, a friendly Mafia where they serve food instead of garotting people.

It's in these moments between the sumptuous shots of food, and away from the nice quiet old man, that the documentary really comes alive. The reverence for Jiro from all who know, live with and work for him is universal, and hearing people enthuse about the man can't help but bring a warm smile to your face. Jiro happily acknowledges his achievements but never comes across as smug: he is still at the top of his game and totally content, reaping the rewards of a life of discipline and hard work.

Eventually Jiro will take the big sleep and pass on the torch to his eldest son, Yoshikazu - who has the daunting task of improving on his father's legacy to be considered a success (Jiro's younger son Takashi has already branched out but only has a Michelin 2-Star rating, the loser). Even though we know Jiro's story it feels like only half the tale has been told, with the rest to be played out through Jiro's teachings. Hopefully David Gelb will return to Tokyo to see how the Ono's are faring in the future. Something tells me everyone will still be talking about Jiro.

More:  Jiro Dreams Of Sushi
Follow us on Twitter @The_Shiznit for more fun features, film reviews and occasional commentary on what the best type of crisps are.
We are using Patreon to cover our hosting fees. So please consider chucking a few digital pennies our way by clicking on this link. Thanks!