Michael Caine has had a long, glittering career spanning five decades. He's been nominated for an Academy Award in every decade since the 1960s. He's even a Knight of The Realm. The man truly is an icon of British cinema. Surely, though, flying a giant bee and high-fiving The Rock has to be his greatest achievement to date.


It's perhaps the most peculiar partnership in cinematic history. Former wrestler Dwayne 'The Rock' Johnson and revered thespian Sir Michael Caine lead the cast in this semi-educational, parent-pleasing, child-friendly 3D fantasy adventure follow-up to Journey To The Centre Of The Earth.

Four years after his visit to the Earth's core, Jules Verne nut Sean Anderson (Josh Hutcherson) receives a strange coded message he's convinced is from his long-lost grandfather, Alexander (Michael Caine) on the Mysterious Island. Accompanied by his man-mountain of a stepfather Hank (Dwayne Johnson), who's keen to bond with his wayward stepson, they head to the South Pacific in search of the magical island Verne wrote about, with local tour guide Gabato (Luis Guzman) and his short-short wearing daughter, Kailani (Vanessa Hudgens) leading the way. 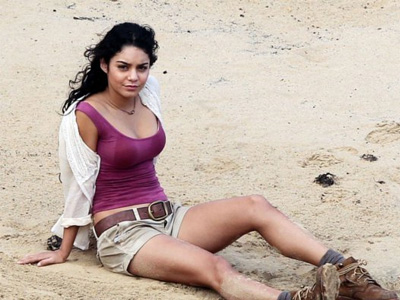 She's only sitting down so you stop looking at her arse.


Not many films shamelessly promote the excitement of reading as much as the Journey series has. In Centre Of The Earth, Brendan Fraser has the book at hand, using it as a 'Rough Guide to The Earth's Core.' In this sequel, Dwayne Johnson breaks a code using Gulliver's Travels, Treasure Island and of course, Jules Verne's own The Mysterious Island. It's like writers Brian and Mark Gunn are saying 'Hey kids! Books are cool!' Parents will be happy and schools will one day play it during wet lunch hours.

If teacher put this on when I was at school, I'd be one chuffed little ten-year-old, because Journey 2: The Mysterious Island is a huge amount of silly, throwaway fun. With more laughs than its predecessor, some astonishing uses of 3D and some extraordinary facial expressions [I hope The Rock raises his eyebrow! –Ed], kids will get a huge kick out of it. 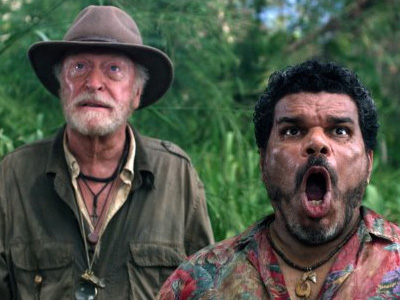 I genuinely can't think of a caption for this. Comments below, please.


With obvious Jurassic Park and Avatar influences, the filmmakers and writers manage to educate without sacrificing entertainment. It falls to Michael Caine's grizzled explorer, Alexander, to go into 'teacher on a school trip' mode and tell us about the lost city of Atlantis, and Captain Nemo and his submarine, The Nautilus. But unlike most teachers, he doesn't lose the attention of the class. Because he's Michael Caine.

We haven't even mentioned Dwayne Johnson yet. Not only does he prove a more charismatic leading man than Brendan Fraser, he refers to his fist as a "thunder cookie" without looking stupid, and punches a giant lizard in the face. He also lets Luis Guzman throw berries at his popping pecs, sings 'What A Wonderful World' while playing a ukulele and exchanges insults with Harry Brown. Poor Josh Hutcherson barely gets a look in. 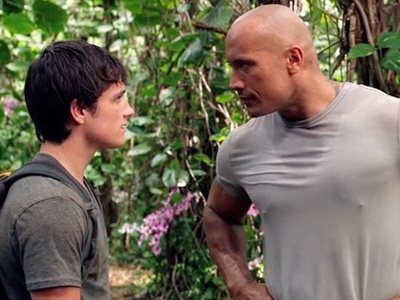 "I modelled my weird nipples on Sylvester Stallone's."


A couple of minor sub-plots fall by the wayside and there are, unsurprisingly, implausibilities strewn all over the place. No matter: kids will love the action, peril and 3D antics, mums will be happy because they'll think their kids are learning something, dads will be happy because Vanessa Hudgens wears little shorts – even grandma gets her jollies from Michael Caine. This really is a film for all the family: Journey 3 seems likely, so swot up on your Jules Verne.

More:  Journey 2 The Mysterious Island  Dwayne Johnson  Josh Hutcherson  Michael Caine  Brad Peyton
Follow us on Twitter @The_Shiznit for more fun features, film reviews and occasional commentary on what the best type of crisps are.
We are using Patreon to cover our hosting fees. So please consider chucking a few digital pennies our way by clicking on this link. Thanks!