And so, Jurassic Park week, the special event that was 65 million and 18 years in the making, comes to an end. We've laughed, we've cried, we've freaked out a little bit when Sam Neill tweeted his approval... Truly, there's nothing left to say about Jurassic Park that hasn't been said this w- Shit! The review!


If you want a fair and balanced review of Jurassic Park, obviously I am not your man. In fact, when I attended a press screening of the film this week, along with assorted journalists who didn't feel as strongly about it as I did, I had to stop myself from ripping their throats out with my bare teeth. When The Incredible Suit told me he thought it was "a great movie, but not the greatest movie" I had to restrain myself from punching him back to the triassic period. Remember your breathing exercises, man.

What I can do is give you a window into why I like the thing so damn much. Not to sound like Grandpa Simpson, but the story starts 18 years ago, where a 12-year-old by the name of Ali Gray was taken to the cinema to see 'that dinosaur film'. Two hours and one minute later, that boy emerged a MAN: pretty much exactly how I look now, only with with less acne. Also I had an onion on my belt, which was the style at the time.

Needless to say, it affected me in a big way. I always liked going to the cinema before Jurassic Park (I can still remember going to see Wayne's World on my own in 1992, in my role as The Loneliest Little Boy In All Of Essex), but it affected me in a profound way. I had never realised the power of cinema to that point; it must have only dawned on me when I exited the cinema, bouncing like a nutter in the direction of the nearest Happy Meal, that those creatures in there weren't actually real. For those two hours, I was watching dinosaurs. And I still feel that way now.

Now, as a mature adult (*looks at site, shakes head*) I have a little perspective and am able to elaborate on exactly what it was that blew me away about Jurassic Park. 18 years later, I'm able to analyse it a little more sharply and even point out a few of its less obvious flaws, but I can honestly say I remain in its enthrall completely. 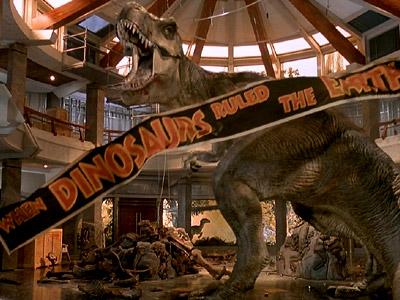 
Though I was sad the screening wasn't at the IMAX, apparently the screen at the VUE in Westfield Shepherd's Bush is the second biggest in the country. Let me just say: DAYUM. That is one sweet-ass screen. The remastered digital print was so sharp you could make out the beads of sweat on Jeff Goldblum's chest; the sound so thunderous, the T-Rex roar genuinely made my seat rumble. Whether or not a 3D conversion would have served the movie or subtracted from it, I don't know, but Jurassic Park is most certainly a movie that has benefited greatly from a 21st century polish.

So, those special effects. Incredible, obviously. It blows my mind to think this movie was made a whole person who can legally drink ago. The secret isn't magic computers or a bigger render farm or extra pixels; the allure of Jurassic Park is maintained thanks to Steven Spielberg's absolute mastery of what to show, when, and for how long. It is baffling to me why so few filmmakers are not able to use CG as sparingly as it is used here; the result is a film where you're genuinely unable to spot the seams between computer-generated dinosaurs and Stan Winston's animatronics. Not that it's easy to look for them while you're clenching for dear life.

It's all in the editing, see. The rule goes that if you see a full-size shot of a dinosaur, it's CG; if it's a partial shot, it's probably an animatronic. Simple. Except the pace at which the major action scenes are shot, the brain doesn't have time to process that information. It speaks volumes that, while watching a making of documentary on the forthcoming Blu-ray boxset, I discovered that some shots of the velociraptors are actually men wearing rubber suits. WHAT. 18 years on and I still wouldn't have been able to spot the difference. 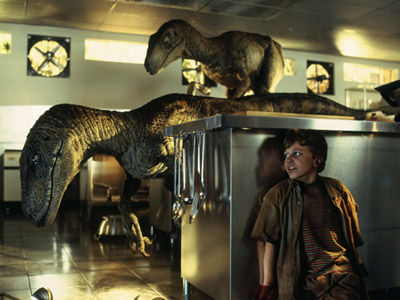 "Seriously guys, quit fucking around. Is that you in there or not?"


I don't think I really need to talk much about the quality of the cast. It would have been easy to line up a disposable conveyor belt of human sausages for the dinosaurs to chew on, but each and every character has a reason to be. Jurassic Park affects Grant and Sattler in seismic ways, both physically and professionally; Malcolm's "rock star" mathematician has reason and righteousness on his side; even Muldoon, with his Partridge-esque safari suit and knee-high beige socks, represents Man as the hunter, now suddenly bumped down the pecking order.

What I can really appreciate, though, is the role of John Hammond, played so perfectly by Richard Attenborough. I never really realised it before now, but Jurassic Park as seen through the eyes of John Hammond is a far more affecting movie than it is from the POV of the kids or the experts or the sarcastic chaos theorist. It is the catastrophic crumbling of one man's empire before his eyes: the complete and utter destruction of his dreams.

There's an innocuous scene that illustrates this perfectly. As Grant and co board the helicopter after the T-Rex kills the raptors (spoiler!), Hammond has his moment of solitude and stares out into the great beyond, contemplating the chaos and destruction his disregard of the laws of genetics has caused. Indirectly, his carelessness has killed people; his own grandchildren almost perished because of his selfish need to entertain.

It's a genuinely heart-breaking scene, one which has gravity I was never able to truly appreciate. Now and only now do you see Hammond as a vulnerable, foolish old man, hobbling on his walking stick, with nothing left to live for. He's completely destroyed. That's when his bottom lip starts to tremble, and has me in complete ruins. In less capable hands than Richard Attenborough's, I very much doubt that brief scene would even register, nor that the character would have even half the depth he offers. This guy is the park's creator, the Dr Frankenstein to his monsters... isn't he supposed to die an unsympathetic, horrible, ironic death? That's how it goes in Michael Crichton's book, but Spielberg knew better than to shortchange his most interesting character. 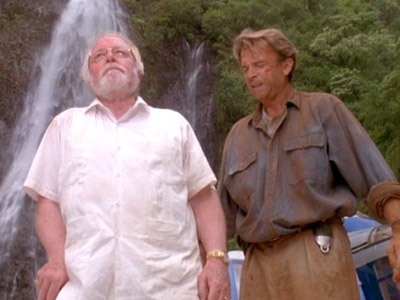 He also wisely removed the scene in which a Pterodactyl craps on him.


In truth, there are a hundred other people to whom Jurassic Park owes a debt. The awesome foursome of Phil Tippett, Dennis Muren, Stan Winston and Michael Lantieri, who built dinosaurs that never age. Gary Rydstrom created sound effects from another time. Wayne Knight, Samuel L Jackson and Martin Ferrero all do great work with small roles. If that soaring John Williams score doesn't make you feel a thousand feet tall, you're officially a reptile. I'm not even joking when I say my wife and I discussed her walking down the aisle to it at our wedding. Fuck it: just for this week...

All debate will be encouraged, then subsequently ignored.


There aren't many films I feel this strongly about. I love Die Hard, Amelie, Fight Club, The Big Lebowski, Airplane, Terminator 2, Back To The Future and Pulp Fiction but would struggle to dedicate an entire week to any of them. Jurassic Park is my favourite film of all time and I imagine it always will be: no matter how old or cynical I get, part of me will always be that same 12-year-old boy, sat in rapture, watching dinosaurs rule the world.

More:  Jurassic Park Week  Jurassic Park  Sam Neill  Steven Spielberg  Laura Dern  Jeff Goldblum
Follow us on Twitter @The_Shiznit for more fun features, film reviews and occasional commentary on what the best type of crisps are.
We are using Patreon to cover our hosting fees. So please consider chucking a few digital pennies our way by clicking on this link. Thanks!