T-REX OF MY TEARS 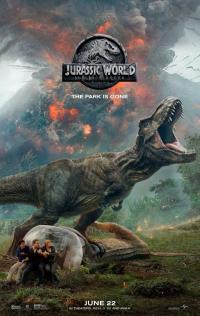 I am a Jurassic Park sequel apologist. I am a Jurassic sequapologist. There’s no shame in loving the original movie, obviously, and I maintain that Jurassic World was an unapologetic, fan-pleasing blockbuster that wanted to reach even farther than Michael Crichton’s visionary thinking. But the sequels? I am at war with myself. The Lost World sort of has some good bits? The birdcage bit in Jurassic Park III was cool, I guess? Jurassic World: Fallen Kingdom, sadly, is a different beast entirely: it is the first Jurassic movie I haven’t enjoyed unreservedly from the get-go. With the other duffers I’d eventually pick up on the flaws after multiple rewatches - this is the only Jurassic Park movie I’ll have to learn to love.


If Jurassic World was a loving homage to the Spielberg original and all the things that made it great, Fallen Kingdom is an accidental homage to the lesser sequels - a sort of Greatest Hits package of all the ways they failed to live up to the OG. The problems start almost immediately, as characters joylessly go through the rigmarole of jumping through narrative hoops and logic loops to get them back on the island and firmly back in peril - a stale sequel trope that has been rusty since Goldblum called it out in '98. If you’re like me, you’ll quickly realise that you have no residual affection for the characters of Chris Pratt and Bryce Dallas Howard whatsoever and the movie offers no reason why it had to bring them back outside of contractual reasons, which everyone knows are the sexiest reasons. Pratt’s dinosaur whisperer is the kind of clod who, upon hearing someone say how hot it is on the volcano island, comments "It’s about to get a whole lot hotter". Jesus fucking Christ. 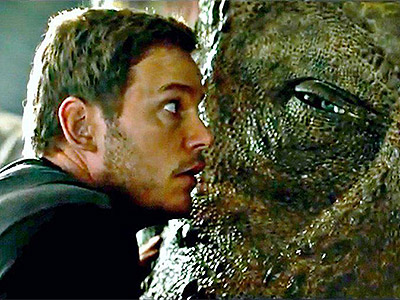 I see you Chris Pratt. I see you.


Worse, when it comes to the new additions to the roster, each character’s motivations are utterly laid bare within seconds of meeting them. This guy in the suit with the haircut will clearly be the business douche. This twinkly old white-haired gentleman in the wheelchair with the granddaughter, he’s clearly the second-hand Hammond. I mean, they cast Ted Levine in a role - fucking Buffalo Bill - and then have the audacity to later ‘reveal’ his character as a bad guy. Poor casting choices undercut the movie at every stroke; returning characters like Henry Wu merely go through the motions, while Jeff Goldblum (now playing Jeff Goldblum and not Ian Malcolm) doesn’t even get to leave his chair. Jurassic World was controversial in whom it picked to die and why, but Fallen Kingdom asks only that you wish all of its characters dead.

The decision to move the Jurassic franchise out of its comfort zone is an admirable one - it is no spoiler to say the majority of the movie takes place in our kingdom, not theirs. But this reversal had me craving the familiar environments of its predecessors: outside of the volcanic opening, the locations of Fallen Kingdom feel claustrophobic and flat, and they never feel conducive to the thrills and/or spills director J.A. Bayona is aiming for. (Here’s a good rule of thumb: T-Rex on a tropical island = majestic, T-Rex in a car park = not so much). 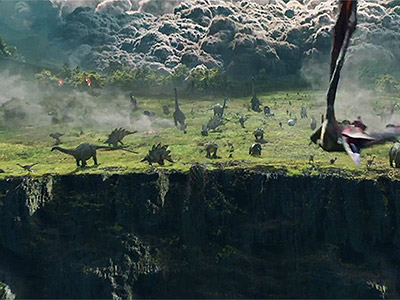 
Bayona does some wonderful things with light, dark and shadow (the dino lit by lava in the tunnel is sublime) but otherwise the attempt to shoehorn dinosaurs into a haunted house monster movie is an ill fit. Some elements have been lifted from John Boorman’s batshit crazy script for Jurassic Park 4 (no gun-toting dino hybrids, for shame) but consequently the story feels like it has been reverse engineered to include certain trailer friendly set-pieces, like the nightmarish bedroom sequence, which is legitimately creepy but feels utterly out of place. 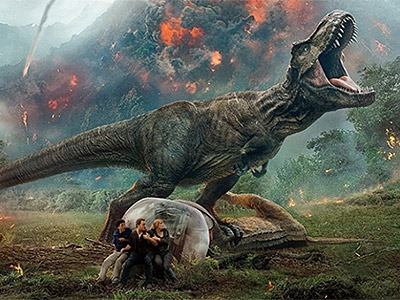 What would you do? Just... strap a gun to it or something?


And another thing: it has long been established that man can now make new dinosaurs. Why, then, is there such clamour to be the owners of the actual physical specimens? Fallen Kingdom’s nadir is an anachronistic auction room scene, compered by Toby Jones in wiggy panto mode, where a room full of hideously outdated rich guy stereotypes (bowl-cut Russian in leather jacket with diamond teeth, silver-haired Asian businessman, cowboy Texan with twirly moustache) bid to buy the Jurassic leftovers. Some over the telephone - how quaint! What’s more, the bids are hopelessly, hilariously low when compared to, say the price tags of Premier League footballers; Liverpool could have strengthened their back four by buying an Ankylosaurus for less than they paid for Andy Carroll in 2011. The whole extended sequence, including the inevitable escape and uprising, is torturously embarrassing.

Grace notes are few and far between - the closest I got to being moved was the lingering shot of a Brachiosaurus slowly consumed by an ash cloud. Jurassic movies have always lived and died on the strength of their terrible lizards, and though the usual suspects all get their money shots, I’m officially calling for a moratorium on Velociraptors being good guys - we’re in Terminator 3 territory now, desperately pretending like hero Arnie was always better than villain Arnie. The dinosaur cast is at least more interesting (and less irritating) than the human cast, but there’s little for them to get their teeth stuck into as they’re shuttled from one confined space to another. Really, once you’ve seen a Tyrannosaurus Rex roaring in front of an exploding volcano, where do you go from there?

I can’t stay mad at you, Jurassic Park. We've been through too much together. But let’s just say we’re not currently on speaking terms.

Additional observations:
- What idiot called it the 'Indoraptor' and not the 'Tyraptorsaurus Rex'?
- I kind of like the Indoraptor - the Frankenstein's monster of the franchise - and I liked how it jittered in the rain, which I assume was a nod towards the original T-Rex animatronic that used to go on the fritz when it got damp.
- Apparently there's a post-credits sequence of a Pterodactyl in Vegas and apparently it's not worth waiting for. More as it breaks.
More:  Jurassic World Fallen Kingdom  Jurassic World  Jurassic Park  J A Bayona  Chris Pratt  Bryce Dallas Howard
Follow us on Twitter @The_Shiznit for more fun features, film reviews and occasional commentary on what the best type of crisps are.
We are using Patreon to cover our hosting fees. So please consider chucking a few digital pennies our way by clicking on this link. Thanks!