I might have been guilty in the past of pointing out that Timothy Olyphant looks like a date-rapist, and I stand by that. But at the time I'd never been exposed to the splendour of Justified.


A couple of things I've noticed recently in Hollywood films: one, as with Django Unchained and Lincoln, they mainly have Justified co-star Walton Goggins in them, and two, none of them have Justified star Timothy Olyphant in them.

It's pretty common for actors to start landing movie roles after their TV show hits big, but rare for the star to be overlooked entirely. Maybe the problem - if he considers it one - is that Olyphant is not a very likeable screen presence, and it's difficult to know where you'd put him. I remember seeing him in romcom Catch and Release, in which it was impossible to buy him as a romantic lead because I couldn't shake the feeling he was about to put on a ski mask and bundle Jennifer Garner into the back of a van. 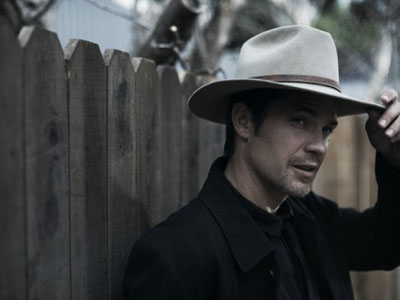 Olyphant, seen here waiting patiently outside a woman's house, ready to pounce when she least suspects it.

With Justified he's found the ideal lead role, though. It relies less on your liking him and more on his exuding uber-confidence; something he can do in his sleep. As US Marshal Raylan Givens he - and we - never doubt that he can talk or shoot his way out of any situation. He's an old-fashioned kind of lawman in a modern-day setting, kicking ass and taking names in rural Kentucky. Unusually for a lead character, he's almost immune to development. Whereas a show like House or Elementary attempts to develop by revealing greater emotional depth in its superhuman lead, there's refreshingly little of this with Givens. He largely is what he is. Even the regular necessity to deal with his petty criminal father, uninterested in Raylan throughout his childhood, uncovers few cracks. Where the odd one rears up, Olyphant knows better than to play the emotional breakthrough card. This is a character of which he has the full measure.

Season three is a mazy, multi-stranded affair, just as much about its ancillary characters as about Givens. The cast is superb: Walton Goggins' regular spot as erudite criminal Boyd Crowder is significant for just how much you like him when he's pitted against other crooks, despite his being a white supremacist in season one. (The occasional reappearance of his swastika tattoo now seems oddly incongruous.) 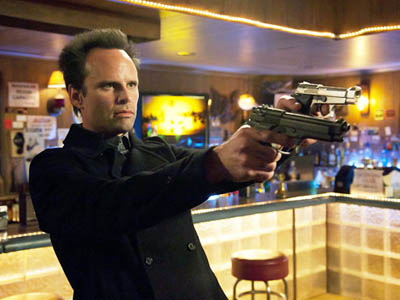 Jeremy Davies is a wonderful mess as snivelling milquetoast Dickie Bennett: ideas just spill out of him with every line-delivery choice he makes. Mykelti Williamson chews scenery all over the place, constantly chopping up meat with a cleaver, never letting you quite feel safe in his company. Everyone avoids the trap of lapsing into Southern caricature; there is always colour in the acting but it's always controlled.

The season is expertly structured, with more interlocking storylines than you'll commonly find in a 13-episode run. None of them is sidelined or ignored for long enough you lose interest in it, and each has a character or two you want to see more of. And, perhaps crucially, Givens usually wears a hat. There are some episodes in which he doesn't, and I am convinced that there is some sort of profound meaning behind this that I have yet to discern. Once I figure it out, you'll be the first to know.

More:  Justified  Timothy Olyphant  Walton Goggins  Jeremy Davies  Mykelti Williamson  Natalie Zea  FX  Channel 5
Follow us on Twitter @The_Shiznit for more fun features, film reviews and occasional commentary on what the best type of crisps are.
We are using Patreon to cover our hosting fees. So please consider chucking a few digital pennies our way by clicking on this link. Thanks!