Remember the key word of superhero sequel The Dark Knight? Escalation. Christopher Nolan took the events of Batman Begins and used them as a foundation for the mayhem to come: how would Bruce Wayne's actions in the first movie affect the world in which he lived? Well, Kick-Ass 2 takes exactly the same approach by expanding its world, but somehow manages to feel smaller and less impressive as a result.


Tonally, Kick-Ass 2 is similar to the first movie; that is to say, all over the place. The narrative is split three ways: surprisingly, the alpha thread belongs to Hit Girl (Chloe Moretz), trying to fit in at high school without Big Daddy in her life; Kick-Ass (Aaron Taylor-Johnson) is practically a sidekick in his own movie, finding solace with Colonel Stars And Stripes (Jim Carrey) and his avenging ensemble; meanwhile, Chris D'Amico (Christopher Mintz-Plasse) deals with his father's death by killing his mother, literally becoming supervillain The Motherfucker. 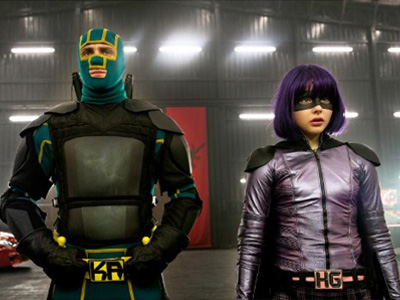 "Maybe I should change my name to The Motherfuckerfucker."


Moretz' Hit Girl gets the bulk of the screen time, and though she's not blessed with massive range, she shoulders the movie well. Scenes in which she attempts to align herself with the mean girls of her high school are a bit of a bore (as are her heart-to-hearts with her surrogate father), and a bizarre detour in which she discovers her latent sexuality by way of a misplaced Union J pop video (YouTube them, or rather don't) feels like an unnecessary distraction from the ass-kicking the title promises. Needless to say, when she's suited, booted and deploying that precious potty-mouth of hers, Hit Girl comes alive, and the movie with it.

The problem here is that Hit Girl is way more interesting than central character Kick-Ass, who is cursed with a lack of anything to do in his own sequel. The introduction of Jim Carrey's gurning psychopath is initially promising but he turns out to be a dud; Kick-Ass subsequently suffering from the superhero yips is neither original or particularly fascinating.

Poor old Dave Lizewski even suffers the indignity of being less interesting than his arch nemesis; Chris Mintz-Plasse is superb as The Motherfucker, and there is much comedic mileage in a youngster who has the rage and the wealth to be a supervillain but neither the class or the know-how to do it competently. One late gag with a shark tank is perfectly pitched, highlighting the gulf between the desire for power and knowing what you do once you've got it. 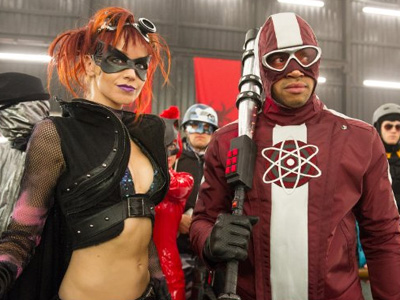 
Unfortunately, Kick-Ass 2 is fun but it isn't always funny. The script is lacking some killer laughs and there are lots of missed opportunities for comedy, most falling at the feet of Carrey. You'll be convinced he's there to illustrate the potential harm in unchecked vigilantism ("Have fun... otherwise, what's the point?") but his character fizzles out without even so much as delivering his message with the subtlety of a baseball bat to the skull. Carrey's non-appearance is symptomatic of a movie that feels like it should have something to say, but doesn't. Aaron Taylor-Johnson wearing a t-shirt reading "I HATE REBOOTS" is about as subversive as it gets. Yes, that's Aaron Taylor-Johnson, star of Godzilla, in theatres 2014.

Kick-Ass 2 feels like a movie in need of a reason to exist, and the lack of Matthew Vaughn in the director's chair, Jane Goldman on screenplay duty and Nicolas Cage in the big silly suit leaves some big holes that the kids can't quite fill. It's an entertaining hour and a half, but has nothing up its spandex sleeves to match the majesty of the first movie's Banana Splits fight scene or jetpack reveal. That manic, confident energy has since dissipated, replaced by Jeff Wadlow's rough-and-ready try-hard attitude that feels inferior to Vaughn's moxie.

It's functional rather than fantastical then, but in a weird way, that fits the movie's aesthetic: the heroes of Kick-Ass 2 can't fly or punch each other through buildings, but they can bonk each other really hard on the head with big sticks. That it can't hope to match the more superior superhero sequels should therefore come as no surprise.

More:  Kick-Ass 2  Jeff Wadlow  Aaron Taylor-Johnson  Chloe Grace Moretz  Jim Carrey  Christopher Mintz-Plasse
Follow us on Twitter @The_Shiznit for more fun features, film reviews and occasional commentary on what the best type of crisps are.
We are using Patreon to cover our hosting fees. So please consider chucking a few digital pennies our way by clicking on this link. Thanks!