Imagine an alternate universe, one in which producers Barbara Broccoli and Michael G Wilson decided to reboot 007 using not the ruthless thuggery of Timothy Dalton or the brutish charm of Sean Connery as the Bond blueprint, instead opting to use the far-fetched, OTT antics of Roger Moore as the template. Ludicrous gadgets. Comic-book acting. Tongue rammed in cheek so deep all dialogue is in danger of being spoken with a lisp. Congratulations! You've just stumbled on the formula that could well have led to the creation of Kingsman: The Secret Service (it could've, if you didn't already know it was based on the book by Mark Millar).


This is an old-fashioned spy movie - or at least as old-fashioned as any movie can be that features iPads as plot points and anal sex jokes - and one that actively flips a middle finger at the po face of modern Bond. Colin Firth plays Harry Hart: Kingsman agent Galahad, suited and booted gentleman and self-confessed lapsed fan of spy movies ("A little too serious for my tastes nowadays, I'm afraid," he smiles). Firth and friends make fine foils for Daniel Craig's humourless Bond (LOL remember when he was in some "deep water" LOL) and happily occupy that dark space between action and comedy where 007 fears to tread. Kingsman is an unashamedly entertaining spy movie that isn't afraid to get foolish. 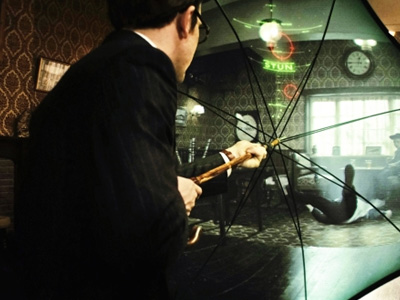 "The next fucker to make a Rihanna joke gets it up the aris."


Kingsman is perhaps the most Matthew Vaughniest movie he's made yet. There's the East End authenticity of Layer Cake, with effing and jeffing and brawls in boozers; there's a large countryside mansion in which his characters hone their skills, à la X-Men: First Class; there's comic-book violence so graphic and novel it could have only come from the brain of Kick-Ass scribe Mark Millar. It's more a familiarity than any sort of signature style, but Kingsman feels like a movie with a confident director behind the camera, one who knows his way around an action scene and a good gag.

There's a playful embracing of spy movie tropes here that sees Vaughn have his (layer) cake and eat it: for every scene in which spy cliches are subverted (goosebump-worthy pre-kill one-liner: "It's not that kind of movie"), there's another in which they're clung to like driftwood. Michael Caine is the M of the outfit, while Mark Strong's gadget man fits the Q mold; Sofia Boutella, meanwhile, gets the pick of the female roles (largely slim pickings, it has to be said) as an amputee henchlady with blades for legs. Again, familiarity forms a welcome framework for Vaughn to work within, but there's still plenty of room to surprise.

Arguably, Kingsman doesn't really come into its own until act three, when telcom mogul Richmond Valentine enacts the evil plan we've only partly been privy to. It's an injection of energy and anarchy and it forces Firth to raise his game, most memorably in a gloriously OTT bloodbath set to the majestic tune 'Freebird'. It's here where Kingsman flirts most brazenly with bad taste (here and the aforementioned bum sex gag) and it'd likely raise Roger Moore's eyebrow into the stratosphere, but it's a scene that's thrilling and troubling in equal measure; one that's impossible not to have a reaction to. 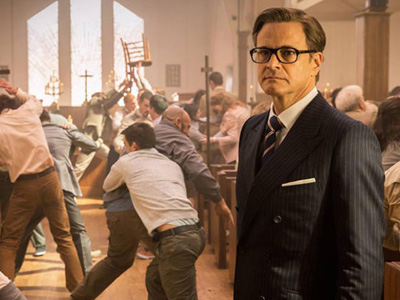 
Side note: there is some atrocious product placement here which commits the mortal sin of taking you out of the movie - a line of dialogue re: Apple products that's even more insidious than the scene in Sex Tape where Jason Segel mentions their build quality. There are ways to do this sort of thing correctly - e.g. Samuel L Jackson's villain chowing down on McDonald's for his evening meal, signifying his lack of class (see also: a subtle Iggy Azalea jibe) - but Kingsman gets an F for trying to sneak Apple evangelising into the script. Tut tut.

True, it's a little crude, rough around the edges (Jack Davenport has every right to feel a little hard done by) and there is some pretty patchy plotting to manoeuvre all pieces into play for the final showdown (including a Big Twist that contributes absolutely nothing), but Kingsman is otherwise a triumph of style and substance: a movie that's dressed up to the nines but isn't just all mouth and no trousers. Bond will no doubt best Kingsman in terms of box-office clout and sheer bombast, but this year is big enough for the both of them. Daniel Craig best start practising his one-liners.

More:  Kingsman The Secret Service  Matthew Vaughn  Colin Firth  Taron Egerton  Samuel L Jackson  Sofia Boutella  Mark Hamill
Follow us on Twitter @The_Shiznit for more fun features, film reviews and occasional commentary on what the best type of crisps are.
We are using Patreon to cover our hosting fees. So please consider chucking a few digital pennies our way by clicking on this link. Thanks!