There will surely be a time soon when the film industry decides that monster movies just aren't a good fit for modern cinema audiences. That we have developed a more sophisticated taste for storytelling and an appreciation for nuance, and that therein lies a problem for films that are essentially about giant rage-beasts smashing things up with their clumsy hoof-paws. Luckily, that time hasn't come yet and until it does we still have opportunities like this one to enjoy creature features that are as big, dumb and ridiculous as whatever enormous idiot monkey is causing all the destruction in the first place. That's right, this film is a gigantic fun monster - a stupidly thrilling buffoon baboon of a movie - and we shouldn't want it any other way.

It’s seems lazy these days to be thankful that a film "doesn’t take itself too seriously" and that it just "knows what it is", but let me put it this way: in striking a balance between substance and spectacle, Kong: Skull Island doesn’t wait a whole fucking hour to show Godzilla Kong. Yes, the plot is weak and the characters are so thinly drawn they could have their own strip in the Beano, but for pure blockbuster entertainment, Kong goes ape-shit. If this is the start/continuation of a new shared Monsterverse, director Jordan Vogt-Roberts fires a bright red smoke-flare into the sky to light the way: just follow the beacon for an awesome time.

Part of why there isn’t much digging beyond surface-level story here is down to the fact that so much is borrowed liberally from other sources. To say that this film was influenced by Apocalypse Now would be like saying that a still life painting of a bowl of fruit was influenced by that bowl of fruit. The look, feel, tone, some exact shots and even the poster are all lifted directly from Coppola’s Vietnam epic, while Hiddleston’s James Conrad (oh look another Apocalypse reference) is cut from the same cloth as your standard 50s pulp hero adventurer.

Elsewhere, Queen Brie is a strong-willed photojournalist determined to focus on any human angle she can find and Samuel L Jackson is the military leader with a maddening hard-on for war. They all sound like terrible stereotypes, but when your big-screen star is a colossal killer gorilla, these guys seem positively Shakespearean in their complexity . And somehow they all collide together in a monster mash of other shortcomings to be… good? Maybe. Enjoyable? Definitely. 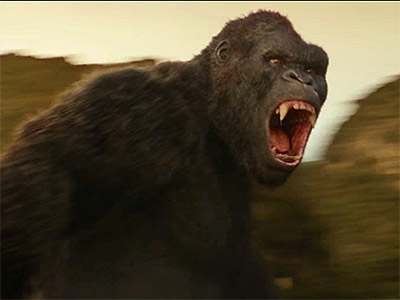 It should be noted that enjoyment is directly proportional to bloodlust here.


It's not dumb luck though. There is an art to be found in the economical storytelling here, without which the action wouldn't be able to take center stage. In the preamble before approaching Skull Island, characters introduce themselves perfectly with just one or two lines. "You're a war photographer" Jackson's Lieutenant Colonel Packard says dismissively of Larson's camera-wielding Weaver. "I'm an anti-war photographer" she corrects firmly. And thus her main character trait is cemented and a central conflict is established. It would all seem very impressive to anyone interested in screenwriting, but there just isn't time to contemplate it before Kong shows up and starts swatting helicopters out of the sky like a child trying to catch bubbles.

There's other stuff to admire on a critical level too, like how the film maintains a deft touch of humour throughout the entirety of its running time, or how King's own fierce determination is perfectly mirrored visually with the film's developing antagonist (I won't say who for fear of spoilers), or even how a common theme of family abandonment is explored in different ways with separate characters. But seriously, who gives a shit when you have a massive fuck-off primate crushing vehicles, rocks and lives with his big leathery claws?

Let's be honest, that's all that really matters. Kong's brutal presence pervades throughout while his monstrous island-mates are made up of truly horrifying Cloverfield-alikes, one paralysingly scary spider and one impossibly adorable tree creature. All of these provide action on a titan scale while the soldiers and civilians stranded on the island are trying to survive at ground-level. It all amounts to plenty of gruesome violence and frenetic peril. 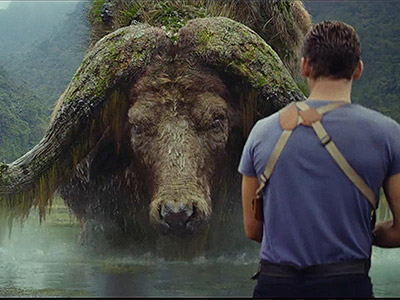 And, in the case of this particular creature, a zen-like calm for some reason.


Plus, whether it's Kong swinging a tree at a mega-monster's jaw or a gas-masked Tom Hiddleston scything his way through bird-beasts in a haze of green poison like some kind of slow-motion samurai gimp, there are so many money-shots in this movie, it has already grossed enough cash to purchase a lifetime's supply of bananas for a real-life King Kong.

Based on this beautifully absurd entry, the proposed Monsterverse just got a major upward swing. Not that this story is told with an overt eye on a widening franchise - Vogt-Roberts manages to create a sense of world-building, but concentrates predominantly on the very isolated events of just this film. At the very least though, whether it's versus Godzilla, Mothra, Stay Puft or the toddler in Honey I Blew Up The Baby, this film makes you believe that a sequel showing an epic fight between two great big bollocking behemoths might just be the best thing ever. In the battle of substance over spectacle, King Kong has just hit back in a big way. And long may he reign.

More:  Kong Skull Island  King Kong  Jordan Vogt-Roberts  Godzilla  Tom Hiddleston  Samuel L Jackson  Brie Larson
Follow us on Twitter @The_Shiznit for more fun features, film reviews and occasional commentary on what the best type of crisps are.
We are using Patreon to cover our hosting fees. So please consider chucking a few digital pennies our way by clicking on this link. Thanks!