Phwoooar, that Rebecca Hall, eh? I'd give her a proper, uh, pleasant evening of slightly awkward conversation and no mistake. See, it's a shame when you have to revert to misogyny to wring something positive out of a film experience. So apologies in advance: Rebecca Hall, she hot in Lay The Favourite. The movie itself: meh, not so much.


Is it bad per se? No, not really. It's just sort of… there. It stays there for an hour and a half or so, within your field of vision, then it goes away, and then you start looking at something else. Much like if you found yourself gazing idly out of a car window at an unremarkable suburban branch of Asda. It wouldn't offend you necessarily: you'd be quite prepared to accept its existence. It just wouldn't affect your day in any meaningful way.

It should be better. Director Stephen Frears has made films of greater substance before, and though 2010's Tamara Drewe (phwoooar, that Gemma Arterton, eh? Sorry) suggested a shift towards frothier fare, Lay The Favourite is the point at which he should've slammed the brakes on. 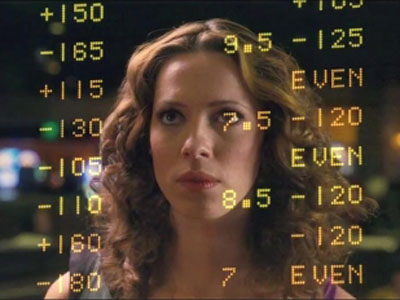 Beth Raymer (Rebecca Hall) pitches up in Vegas looking for a job and falls in with local sports gambler Dink (Bruce Willis), and before long she's out placing bets for him at casinos, proving she's got a knack for the numbers game. She's his good-luck charm, but when his wife Tulip (Catherine Zeta-Jones) gets jealous and tells Dink to fire her, it all… I don't know, spirals out of control or something? More accurately, she tells him to fire Beth, he does, then he and Beth have a brief flirtation which comes and goes, then Joshua Jackson shows up and they all join forces against Vince Vaughn, who's wronged them somehow.

This synopsis is vague not just because of my unprofessionalism but also because the story itself is. Little plot details flit in and out, none of the comic or dramatic punches ever really landing, and you barely notice any of it's happening. It's a shame, because Hall is a rising star in her first lead role, and in her own right she's a great screen presence: here nailing the accent and being the only source of energy in the whole thing. But she made an odd choice to play Raymer as a flirty, ditzy sort of character, which made her a little annoying at times, and sometimes even too air-headed to care about or be a satisfying lead.

There's a similar conflict about Zeta-Jones's choices: Tulip's a Joan Collins-esque plastic trophy wife with an acid tongue, and chews up the scenery wherever she goes. But the choice to play her as this sort of caricatured refugee from Dallas means that her later dramatic scenes have no weight. 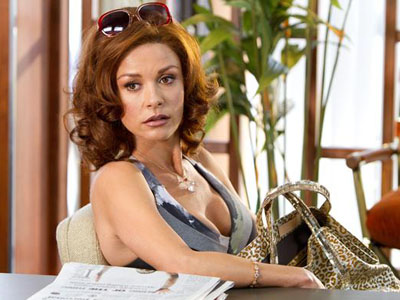 In between, Joshua Jackson's there, and then he isn't, and then he is again, and it makes no real difference either way. I think the idea is that he's the stand-up guy whose money we're supposed to care about him losing, but there's no real romantic spark between him and Hall, and… well, he's Joshua Jackson, isn't he? Head on back to the Creek, Pacey: we'll let you know if we need you.

On the plus side, Vince Vaughn gets some good lines, even if he's underused, and the betting is done very well: what could've been a baffling array of statistics is broken down for us into simple binary choices we can understand. But overall this is based on a true story and still manages not to feel realistic. Like if you suddenly realised this branch of Asda you'd been looking at was actually made of cheese or marshmallow or something, but somehow you didn't care either way and just nodded off in the car.

More:  Lay The Favourite  Rebecca Hall  Bruce Willis  Catherine Zeta-Jones  Joshua Jackson  Vince Vaughn
Follow us on Twitter @The_Shiznit for more fun features, film reviews and occasional commentary on what the best type of crisps are.
We are using Patreon to cover our hosting fees. So please consider chucking a few digital pennies our way by clicking on this link. Thanks!