The gender-discriminated world of Suffragette is so far removed from my everyday life as to be completely unrecognisable, much less relatable. Which means that I should either a) credit how far we have come as a society since then, or b) immediately own up to the fact that I am a 30-something white male who has never had to contend with any prejudices or glass ceilings in his life. Either way, join me as I nervously criticise a film about the kind of tragic societal injustice of which I am entirely unqualified to discuss thanks to my having a penis.


There is no denying that this film's story is one that needs telling. The fact that the historical account it presents seems so completely unbelievable makes it an essential eye-opener for modern audiences. Although, for the same reason, it means there is an immediate disconnect between the viewer and the characters on screen. As we see stern-looking bastard-men stroke their magnificent facial hair before physically beating women in the street, sexually abusing them at work and getting them arrested for simply holding a placard, this plot seems more likely to be the dystopian basis for the latest bloated Wachowski sci-fi rather than a historical account of London life less than 100 years ago. And the "Cor blimey, Guv'nor" accents aren't doing anything to help sell the film's credibility either.

Don't get me wrong. I know all too well that this is a sad factual truth, that the awful mistreatment of women at the time of the Suffrage Movement shouldn't be questioned and that, even now, there are still many imbalances and injustices that women face every day in comparison to men. I have no doubt that things have always been - and can often still be - unfair for the 'fairer' sex. 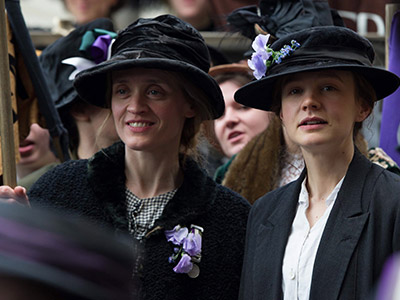 [caption deleted for fear of offending literally anyone]


But I found it difficult to connect to this film. And the question I ask is this: Are we allowed to question the veracity of Suffragette’s depiction of this literally incredible piece of our past? As with any film based on history, a certain amount of artistic license must always be employed. How else can the 50-year Suffragette campaign prior to the events in this movie be condensed down and sold to an audience within a two-hour framework? How much has been exaggerated for dramatic effect?

Crucially, if I have difficulty relating to the problems at hand in the film because I find the whole situation to be truly unreal, is that the fault of the film, the fault of history or entirely the fault of my own ignorance? By even asking the question, am I opening myself up to accusations of being a sexist misogynazi?

So let’s forget all that. The performances are incredible. The story is powerfully compelling and I left the cinema feeling like an utter shit just for having an Adam’s apple.

Well done filmmakers. I hope you get all of the awards. It really is a very good film. And I promise that the next time I feel like debating the plausibility of the portrayal of events here, I will just choose to punch myself in the dick instead. Sorry.

More:  Suffragette  LFF 2015  LFF  Carey Mulligan  Sarah Gavron
Follow us on Twitter @The_Shiznit for more fun features, film reviews and occasional commentary on what the best type of crisps are.
We are using Patreon to cover our hosting fees. So please consider chucking a few digital pennies our way by clicking on this link. Thanks!