There's nothing like starting your annual London Film Festival experience with a French movie about a small boy who sees visions of a terrifying man-monster while being held captive in the woods by his increasingly erratic and abusive father. Happy LFF, everyone! (*dons subtitle glasses*)


If the above summary sounds practically parodistic of high-brow film festivals, the film itself won't do much to change your outlook of them. It's not that Into The Forest is particularly awards-grabby or pretentious, but what director and co-writer Gilles Marchand has delivered here is fairly impenetrable. He clearly tries hard to keep events as ambiguous as possible at all times - at least until the final scenes - and audiences are left to second-guess motivations and meaning throughout, but this never feels particularly rewarding. There's no doubt that this is intended to be a challenging watch, but it's one that tests patience more than it tests ideas and pre-conceptions.

The cast, at least, are only to be admired. A very young Timothé Vom Dorp In particular displays attention-grabbing, wide-eyed introversion and sensitivity as Tom, a little boy who, it is hinted early on, has a supernatural 'special gift'. What that might be is never fully defined, but he keeps seeing a terrifying figure with a fucked-up face everywhere so maybe he has the ability to super-soil himself? 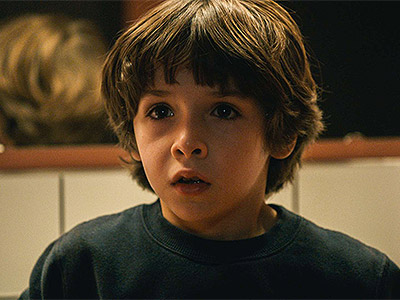 He's going to be no good in the fight against Thanos.


Along with his bullish older brother Benjamin, Tom visits his estranged father who immediately recognises Tom's 'talent' as something that he possesses himself. With bursts of temper sitting at odds with his otherwise zen-like attitude, Jérémie Elkaïm plays the boys' dad with uneasy, nervous energy, acting as both threat and friend, often in the same scene and often separately to each brother. But what is he keeping secret? He claims to never sleep and seems intent on pushing Tom to confront his power by, for example, trying to reading minds, while Tom remains confused and scared by the very idea of exploring his gift further.

In any case, dear old dad apparently decides that the best thing to do is simply take the kids away to a remote house in the middle of a deep forest where no one can find them and then start acting out in terrifyingly unpredictable ways. 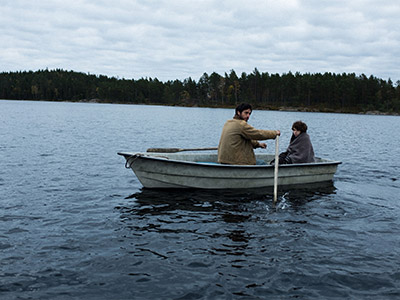 "Now Tom, use your mind to turn this lake into AN EMOTION."


Right at the start of the film, we see Tom talking to a child psychiatrist and being asked about how he feels. What the psychiatrist summarises simply as 'apprehension', Tom thinks is more accurately defined as 'premonition', and this sets the crux of the film as both interpretations are left dangling for the audience to grasp at. It also neatly describes the viewing experience; one that is built on mounting tension, but that which consists of a false sense of foreboding, counting down towards an unknowable event that never really transpires. At least not for a long time, during which we see confrontations with a group of hitchhikers, arguments about phone reception and an extended sequence in which the boys' father just drags a boat around the woods for a long time. It all amounts to not much more than a lot of wasted time and frustration, all seemingly by design.

The pay-off at the end, when it finally arrives, puzzles and bemuses, acting as little consolation for the empty story that precedes it. But at least the forest and lakes look pretty along the way. I guess.

In any case, this is a film that should stand on its own as a story of childhood wonder and parental neglect, and is obviously in no way indicative of film festivals as a whole, as I joked about above. They obviously can't all be about traumatised kids and trees and monsters, can they? And I'll no doubt find that out when I attend my next planned LFF film, A Monster Calls.

More:  LFF 2016  London Film Festival  Into The Forest  Gilles Marchand  Timoth Vom Dorp  Jrmie Elkam  Tho Van De Voorde
Follow us on Twitter @The_Shiznit for more fun features, film reviews and occasional commentary on what the best type of crisps are.
We are using Patreon to cover our hosting fees. So please consider chucking a few digital pennies our way by clicking on this link. Thanks!