Did you know Shakespeare didn't even write his own plays? Yeah mate, totally true. It was some Welsh bloke with a beard. Oh yeah, and the moon landing was fake too – they done it in a Margate car park. JFK? Martian hit squad. And Derren Brown predicted 9/11, but promised Osama Bin Laden he'd never tell anyone. No word of a lie mate, I swear. The bloke who directed Godzilla told me.


Yes, Anonymous is most likely total and utter bollocks. The myth that Shakespeare's plays were not written by the Bard himself but by the Earl of Oxford, Edward De Vere, is almost as old as the parchments they were written on. But once you accept that Roland Emmerich's fable holds about as much historical credibility as National Treasure: Book Of Secrets, it's actually quite the ripping yarn – even if it features precious few aircraft carriers being casually lobbed onto world landmarks. Not to worry: Michael Bay's 3D adaptation of Moby Dick is due next year, with Martin Lawrence in the lead. "Call me Ishmael... bitch."

Rhys Ifans is De Vere, the aforementioned Welsh bloke with a beard; a nobleman who Emmerich supposes wrote every word of Shakespeare's collected work. The Elizabethan era being a time in which theatre was considered a pastime of ill repute, De Vere – who had no small connection to the royal family – wasn't able to publish plays in his name, so had them credited to another playwright; first Ben Jonson (Sebastian Armesto), then an actor named Will Shakespeare (Rafe Spall). While the Bard prospers, De Vere is drawn into the power struggle surrounding the succession of Queen Elizabeth, who he verily nobbed rotten when he was played by that dude from Twilight in a flashback. 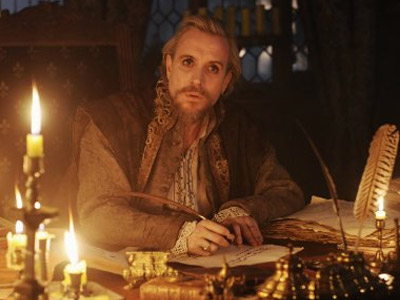 
An obvious departure for Roland 'If it has tourists, I'll fuck it up' Emmerich, Anonymous is a hugely ambitious story: the Shakespeare conspiracy only amounts to half the plot, with Vanessa Redgrave's Queenie getting a pleasing amount of screen time. Alas (I'm using old-timey language), Emmerich has over-reached somewhat, and the story suffers from too many characters, too much inbreeding and too many flashbacks, which you literally have to place in chronological order depending on the length and shade of David Thewlis' beard. When the story moves away from Shakey and onto the throne, Anonymous loses focus and sags under the weight of its own florid pretentiousness.

Thankfully, the cast are game and, for the most part, have correctly gauged the tone as 'camper than Russell Grant's VW'. Ifans plays De Vere as a borderline schizo ("I'd go mad if I didn't write down the voices!"), while Rafe Spall plays Shakespeare as a sort of ye olde David Brent, cavorting and capering with little respect for accuracy but with one eye on the cheap seats. This Bard isn't quite the literary genius history would have you believe – according to Anonymous, he's an illiterate degenerate who's fond of boozing and bear-baiting. Also he invented crowd-surfing, but that one might actually be true. At any rate, most of the movie's high points are his. 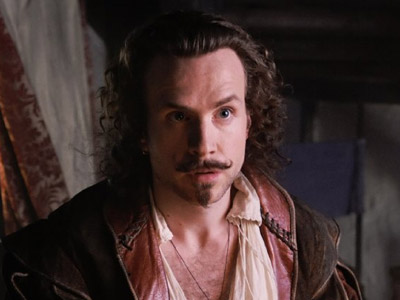 And he would always be remembered for being the King of Burgers.


Only Edward Hogg (Bunny And The Bull) is lumped with a role without humour – the one-dimensional, hunchbacked villain of the piece, Robert Cecil – but he does rise above the boos and hisses to make something of insubstantial material. That's fairly typical of Anonymous: an above-average actor trying their best to elevate stuffy dialogue to digestible levels. "My God," gasps Helen Baxendale of her playwright husband. "You aren't... writing again... are you?" Hopefully the irony of a film that celebrates the wonder of the written word despite being poorly written won't be lost on everyone.

That's more screenwriter John Orloff's fault rather than Emmerich's, however, and despite the film's myriad flaws, you have to applaud the director for his change of direction and refusal to dumb down a sprawling, complex story for those more used to his disastrous oeuvre. Don't let the fact that it's different – or unadulterated bullshit of the highest order – put you off a story that, in truth, is more interesting than it is wholly entertaining or accurate. I mean, honestly. Shakespeare was a fraud? Pah. Next you'll be telling me the world isn't going to end in 2012.

More:  Anonymous  Roland Emmerich  Rhys Ifans  Rafe Spall  Vanessa Redgrave
Follow us on Twitter @The_Shiznit for more fun features, film reviews and occasional commentary on what the best type of crisps are.
We are using Patreon to cover our hosting fees. So please consider chucking a few digital pennies our way by clicking on this link. Thanks!