If you'd have told me in February that Aussie drama Animal Kingdom would be the second best anything of the year, I'd have called you a drongo and a flaming galah. Nevertheless, Snowtown – a true-to-life serial killer drama from first-time director Justin Kurzel – effortlessly topples it as the best Australian crime thriller of 2011. In fact, it's pretty close to being the film of the year, period. If you can make it through to the end, you'll make yourself a promise that you'll never watch it again. It's so depressing, you may need to ride the Nyan Cat home just to shake yourself out of your slump.


Snowtown tells the true story of Australia's most notorious serial murderer, John Bunting (played with quiet ferocity by Daniel Henshall), who killed eleven men, women and children at the end of the century. As in Animal Kingdom, we witness these monstrosities from the point-of-view of an innocent youngster (in this case, hugely impressive newcomer Lucas Pittaway), who is unwillingly embraced into a life of misdeeds and helplessly seduced by charismatic criminals whose ego and bloodlust prove too infectious to resist. 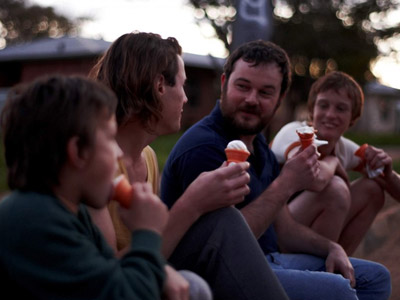 "Ice cream? Just tell me who to kill!"


The difference between Snowtown and Animal Kingdom is that in the latter, you were always aware of the cat chasing the mouse – for every bad guy, there was a good guy on his tail, even if the lines were often blurred. Conversely, Snowtown is a suburb buried so deep in the Australian south, psychopaths like John Bunting aren't just allowed to continue unabated, they're active members of the community. As the bodies and barrels pile up, you won't hear one siren. It is a film bereft of hope. There is no safety net; not even the slightest chance that Guy Pearce and his moustache might turn up and save the day.

So... grim? Relentlessly so. It's so bleak, it makes Animal Kingdom look like Animal Crossing. Snowtown is the first film for which I've had to physically stop myself from watching a scene – an agonisingly drawn-out strangulation that's unsettling to the point of nauseau. Kurzel is unapologetic in showing the violence that Bunting dished out – to pull his punches would be an injustice.

It's astounding to think that Snowtown is Kurzel's feature debut, moreso when you realise Henshall and Pittaway are making their first movies too. It's an astounding achievement: so assured and confident is his direction, Kurzel could easily be labelled the Aussie Scorsese from his premier effort alone, while the two leads give searing performances that can't be forgotten. Henshall, like Animal Kingdom's Ben Mendelsohn, changes the atmosphere in a room like someone's tossed in a live firework; Pittaway brings more intensity to his role than doe-eyed cipher James Frecheville managed, even if he does look like a recently bereaved Jesse Eisenberg. 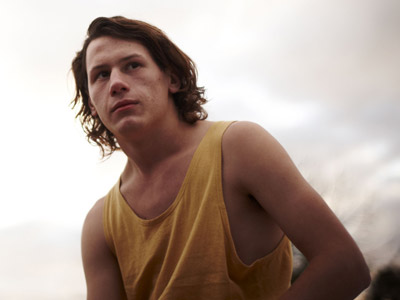 Or a super nineties James Franco.


It's perhaps not for everyone; a movie so thick with sour atmosphere it could smoke out a beehive. Unflinchingly nasty, graphic and gut-wrenchingly powerful, Snowtown is a film that dares you to look away, but compels you to keep watching. As portraits of serial killers go, this deserves to be hung on the wall next to Henry.

More:  Snowtown  LFF  Australia  Animal Kingdom  Justin Kurzel  Daniel Henshall  Lucas Pittaway
Follow us on Twitter @The_Shiznit for more fun features, film reviews and occasional commentary on what the best type of crisps are.
We are using Patreon to cover our hosting fees. So please consider chucking a few digital pennies our way by clicking on this link. Thanks!