The dog doesn't die. What a relief. After the relentless misery of films like Tyrannosaur and Snowtown, and with We Need To Talk About Kevin still to come, I'm just grateful a film as joyous as The Artist even exists. A lovingly shot black and white homage to silent film, Michel Hazanavicius's evocative picture echoes the classics of the genre and stretches wide over the cinematic horizon like a double rainbow (so intense, all the way across), blasting away the black clouds hanging over the London Film Festival. If it doesn't leave you with a smile plastered all over your stupid face, then you don't have a mouth, in which case, I'm sorry I said your face was stupid.


Jean Dujardin, who scientists recently proved has the most French-sounding name ever, plays George Valentin, a silent movie star in the mould of Rudolph Valentino who can command audiences with little more than a raise of his eyebrow and a flash of his pearly whites. A chance photo-op with adoring fan Peppy Miller (Bérénice Bejo) propels her into stardom too, but while she aligns herself with talkies – the new sensation that's taking Hollywood by storm, much like 3D isn't today – her ageing matinee idol falls on hard times.

I could spend hours talking about how fantastic The Artist is; how sublime Dujardin and Bérénice Bejo are; how natural their movements and expressions are; how perfect the score is - oh, the score, so expressive and lively and jovial and magical. I could do that, or you could just read the below, and trust me that not a single word is a lie. I'd only end up using them all anyway, so just try to imagine the words I'd use between them and we can all go back to pretending I'm an actual journalist.

Oh, and it also has the cutest dog ever, and it doesn't get kicked in the head or shot or abused or anything. Oh, happy day! 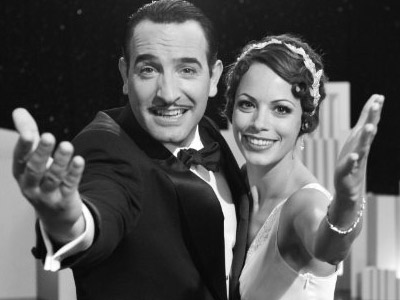 Ta-da!
More:  The Artist  LFF  Michel Hazanavicius  Jean Dujardin  Berenice Bejo  John Goodman
Follow us on Twitter @The_Shiznit for more fun features, film reviews and occasional commentary on what the best type of crisps are.
We are using Patreon to cover our hosting fees. So please consider chucking a few digital pennies our way by clicking on this link. Thanks!