How could it be that Ben Affleck – he of being the bomb in Phantoms, yo – has become the most exciting American director working today? The former himbo and male half of Bennifer made one of the all-time greatest career turnarounds when he ditched the smug action hero roles and gave honest to goodness filmmaking a shot; first with sensational kidnapping drama Gone Baby Gone, then with palm-sweatingly tense heist thriller The Town. Affleck has gone one better with his third film as director, moving from the frying pan of Boston into the fire of Iran for his most ambitious – and awards-worthy – movie yet.


Argo is based on the siege on the US Embassy in Tehran during the extradition of Ayatollah Khomeini in 1979. But don't despair, because it's also about movies, too. When six American diplomats escaped the siege and sought refuge at the Canadian ambassador's home, the CIA launched an operation to retrieve them from Iran at its most volatile. The solution? Not a 300km bike ride as originally planned, but a bogus cover story: the six were to pose as a film crew on a location scout, and with the help of CIA man Tony Mendez (Ben Affleck), would return home to commence work on Argo, a film that didn't even exist. If it was a mission undertaken by The A-Team, this would be the moment that Hannibal would chew on his cigar and say: "It's so crazy it just might work." 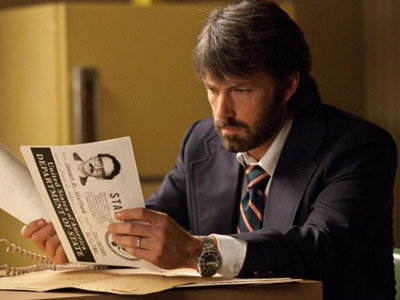 "I love it when a beard comes together."


George Peppard was sadly unavailable, but Ben Affleck proves just as capable, both behind and in front of the camera. Argo is a masterclass in sustained tension, and Affleck has paced the movie perfectly, making two hours fly by for us while lasting a lifetime for his hostages. The period detail of early 80s Iran is sublime – illustrated by spookily accurate comparison shots over the closing credits – meaning the stakes feel real and the sense of danger is rooted in reality. Argo feels like a proper old-fashioned 70s thriller, the kind Alan J Pakula used to make: taut and lean, but with dialogue to die for, plus character and attitude to spare.

Take the supporting cast, for example. You'd expect anyone but Big Ben to play second fiddle here, but that's not the case. Bryan Cranston puts in a committed turn as Mendez' man back at the Agency, capable of spitting fire when necessary ("How do we find him?" he screams, "We're a fucking spy agency!"). Scoot McNairy is unrecognisable under a 70s 'tache as the hostage with the most dispiriting grip on reality, while Alan Arkin and John Goodman bring the house down as the LA players charged with concocting a fake movie. "You want to come to Hollywood and and act like a big shot without actually doing anything?" hams Goodman. "You'll fit right in."

It's that same self-awareness that sees Argo play right into the Academy's hands – because which crinkly old upper-class white millionaire doesn't love a movie about movies? What could have been a shameless ploy to appeal to Oscar voters is actually subtly underplayed by Affleck, who expertly balances the opposing tones of tragedy and farce. Argo criss-crosses political tension, human drama and moments of levity without ever lurching awkwardly between them – one scene, which cuts back and forth between Argo's in-costume line reading and an Iranian hit squad, is devastatingly effective in highlighting both the absurdity and the gravity of the situation. 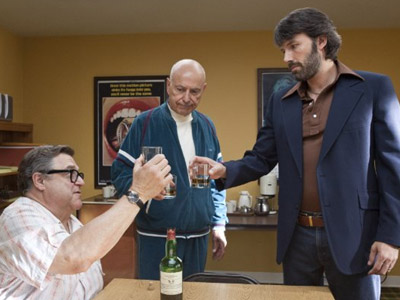 Raising a toast to fashion trends that have since passed on.


Crucially, when Argo gets serious in its home stretch, there won't be a bucket of popcorn left unshaken. Tense, funny and grim in all the right places, Ben Affleck's third and finest movie to date should not be overlooked at the Oscars. Avoiding the patriotic chest-thumping that usually comes with true stories of US history, Argo starts with the Stars and Stripes being burned and ends with the world celebrating Canadian courage, but in between, manages to be one of the most accomplished American films of the year.

More:  LFF2012  Argo  Ben Affleck  Bryan Cranston  Alan Arkin  John Goodman
Follow us on Twitter @The_Shiznit for more fun features, film reviews and occasional commentary on what the best type of crisps are.
We are using Patreon to cover our hosting fees. So please consider chucking a few digital pennies our way by clicking on this link. Thanks!