#LFF2012: Beasts Of The Southern Wild

Beasts Of The Southern Wild is this year's wreath-laden indie movie of choice: an incredibly slight independent film from a first-time director, with no real plot to speak of, a cast of unknowns – including a tiny yet infinitesimally wise child as its lead – and a GREAT BIG POLITICAL METAPHOR at its heart. Naturally, I felt inclined to hate it upon first sight, but 'Beasts Of The SoWi' (as some horrible hipster shit in my screening called it) defrosted my cold, dead heart like one of those polar ice-caps it pretends to care about. It's actually pretty lovely if you can park the cynicism bus round the back for a bit.


The movie is set in a swamp-like bayou region of the American South called 'The Bathtub' – so named because it'll be the first land-mass to flood when the sea-levels rise. I'm not sure if you've ever listened to a world Al Gore has said (that wasn't on Futurama) but those puppies are rising. We follow precocious six-year-old Hushpuppy (Quvenzhané Wallis), a resident of The Bathtub who lives in a shit-shack with her deadbeat dad, living off the land and managing to peacefully co-exist with nature. Until it floods. BAM. Score one for Gore. He totally called it. 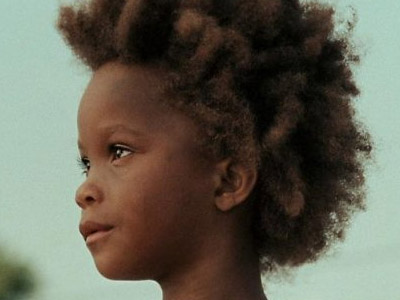 
Where writer/director Benh Zeitlin (oh God, he even has an silent 'h' in his first name: HOW IS THIS MOVIE NOT TERRIBLE) levels the score is in the details. No one ever directly mentions New Orleans or Hurricane Katrina, but it's the metaphor du jour and the basis for Beasts Of The Southern Wild's striking imagery – marshlands completely submerged, houses torn apart, men and women lying face down in the dirty water. The thick-cut Southern accents and the constant clucking and chattering of the island's animal inhabitants are instantly transportative. You'd think it another planet were the real-world parallels not quite so heavy-handed.

Beasts Of The Southern Wild is anchored by a pair of sublime performances – pocket dynamo Quvenzhané Wallis, and her abusive father, played by Dwight Henry. Wallis is that rare kind of child actor to which everything appears to come naturally; you're never aware of cue-cards being held just out of shot, or carers waving around plush toys behind the camera, like you'd jiggle keys at a baby. She stomps around like a miniature tyrant, totally owning the film, only occasionally pausing to spin some mildly irritating homespun wisdom (which almost always begin with a variation of, "Mah daddy always says...").

Henry is almost overshadowed by his screen daughter, but his is a tough role to nail – a drunken, shambolic, absent father figure, he spends the majority of the film playing the role of villain while cute little Quvenzhané is causing all sorts of cooing. Nonetheless, when the threadbare plot finally requires his character take part, Henry sells it excellently, proving adept at the sort of emotional father-daughter that make even grown, strapping musclemen like me go a big fat wet one. I know, I was as shocked as you. 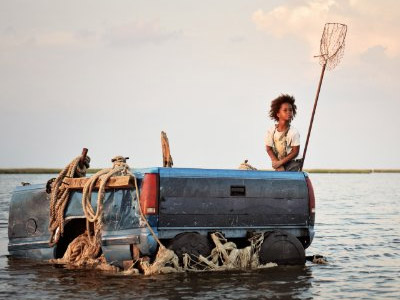 Sailing on an ocean of my tears on a junk boat of my absent manliness.


Original and aesthetically unique, Beasts Of The Southern Wild is almost impossible to categorise. The only similar film in recent memory is Spike Jonze's Where The Wild Things Are, and that only comes to mind because of the monster connection; the fantastical Aurochs (read: 'Large-tusked warthogs') that roam through Beasts Of The Southern Wild seem almost like an afterthought. Frankly, you could hoover them right out of the movie and have no less effective a film – a cliché it may be, but the location feels just as alive and way more tactile than some scary CGI pigs.

Of course, there's every chance I'll rewatch Beasts Of The Southern Wild in a few months, and realise that everything I loved about it, I actually hate. But as mah daddy used to say, stop blogging about films and come outside to help me wash the cynicism bus.

More:  LFF2012  Beasts Of The Southern Wild  Benh Zeitlin  Quvenzhan Wallis  Dwight Henry  Hipsters
Follow us on Twitter @The_Shiznit for more fun features, film reviews and occasional commentary on what the best type of crisps are.
We are using Patreon to cover our hosting fees. So please consider chucking a few digital pennies our way by clicking on this link. Thanks!