As we welcome the BFI London Film Festival into our lives once again, get ready for a spate of reviews of worthy, awardsy type films that illicit an emotional response different to our usual "fuck yeah, that roundhouse kick was awesome!". And End Of Watch is as good a film as any to kick off proceedings, being a GRITTY, REALISTIC cop drama that reminds us that crime on the streets of LA is GRITTY and REALISTIC and OFTEN QUITE HARROWING REALLY.


Jake Gyllenhaal and Michael Peña star as police partnership Taylor and Zavala respectively, two cocksure cops who take an occasionally unprofessional approach to law enforcement, bending the rules when it suits them. While the pair carry out their duties, shooting both bad guys and ‘the shit’ in between crime scenes, their relationships with loved ones evolve – girlfriends become wives, wives become mothers, etc. And yet, after confiscating a large amount of money from a crim brandishing a gold-plated AK47, they unwittingly wind up on course for a life-and-death showdown with a dangerous Mexican drug cartel.

Although not quite ‘found footage’, End Of Watch is presented as an edited-together collection of first-hand recordings made by Jake Gyllenhaal’s Taylor, who has decided to record his day-to-day job for a film project. While this makes for a questionable gimmick at times (more on this later), it does at least help to achieve the highly intimate and personal tone throughout. 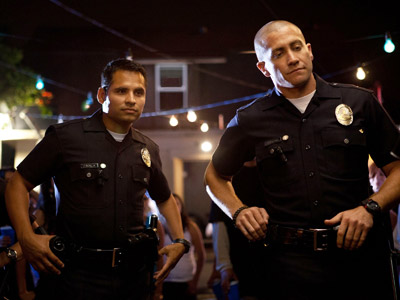 
While most cop drama could focus on the gunfights and car chases, this film spends most of its time letting you really get to know the characters. With Taylor and Zavala bantering back and forth cut together with footage of Taylor’s flourishing relationship with Anna Kendrick’s Janet, we are given the rare opportunity to really feel invested in these characters. This means that, as the threat of a gang’s kill order looms steadily in the background, this otherwise directionless plot builds gradually to a tense crescendo that will have you genuinely concerned for the buddy cops.

Of course, a lot of this is sold on the very natural chemistry between Gyllenhaal and Peña, the former taking on the role of an intelligent prankster looking for love, while the latter impressively eschews his comedy roots to portray the more mature family man. In what is presumably largely improvised chitchat, the pair perfectly capture the streetwise element to their macho cops, speaking a convincing slang, teasing each other as familiar friends and – particularly in Peña’s case – displaying a whipsmart sense of humour that helps to lighten the overall mood. 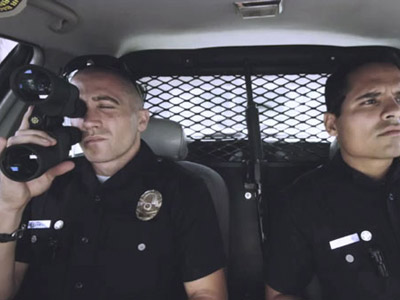 This is not the most practical way to use binoculars.


The only issue with the film – and how bothersome this is really depends on how nitpicky you are as a viewer – is in this idea of it being all presented as footage recorded by Taylor. It’s a device that is occasionally forgotten (with more than the odd sweeping city shot between scenes) and, at times, makes absolutely no clear sense whatsoever. Both buddies are fitted with convenient small cameras so we get to see everything from their point of view, but on occasion we watch the action from a non-existent separate camera that contains both of them in the shot. It’s still a shakey-cam, implying that this is still part of an amateur recording – but where is it coming from?

And this could all be forgiven if the film didn’t go out of its way to make you think that it IS all recorded by the characters. One early drive-by shooting doesn’t involve either of our two leads, but that’s ok because luckily both the gang doing the shooting and the group on the receiving end just so happen to be filming themselves in exactly the same way. It’s a plot point that is just too convenient to believe and, between this and the other impossible camera angles, the film can become utterly infuriating to watch. Those who are too wrapped in the story may not notice, but if you think about it once, you will – like me – spend a lot of the time during the film biting your fist trying to fathom the logic behind every other camera angle. Basically, I’m saying that, by merely mentioning it here, I’ve already ruined the film for you.

And yet, overall the film recovers well from this glaring error in judgement. Between the fun repartee between the two leads and the tense anticipation of what’s to come, End Of Watch makes for an absorbing film; authentic, unpredictable and affecting. Exactly what you would expect from the writer of Training Day and Harsh Times... just with added hidden cameras.

More:  LFF2012  End Of Watch  Jake Gyllenhaal  Michael Pea  David Ayer
Follow us on Twitter @The_Shiznit for more fun features, film reviews and occasional commentary on what the best type of crisps are.
We are using Patreon to cover our hosting fees. So please consider chucking a few digital pennies our way by clicking on this link. Thanks!