For a film about the perils of screenwriting, Seven Psychopaths sure could have used a few extra drafts. Far from the dognapping caper the trailers would have you believe, writer/director Martin McDonagh's follow-up to In Bruges is actually a far darker, way more ambitious meta comedy about a man trying to write a genuinely heartfelt movie in spite of the various ridiculous incidents that seem determined to inform it. That it immediately invokes unfavourable comparisons to Adaptation does not necessarily make Seven Psychopaths a failure, but you do find yourself wishing that McDonagh had the foresight to intentionally ruin his own movie with as much precision as Charlie Kaufman had.


On the surface, Seven Psychopaths appears to be the tale of Colin Farrell's screenwriter Marty, who is struggling to write his new movie, also titled Seven Psychopaths – and that title is all he has. Marty, for reasons never explained, associates with lunatic Billy Bickle (Sam Rockwell), who makes his money from a lucrative dog kidnapping scheme: stealing precious pooches then having kindly colleague Hans (Christopher Walken) claim the reward. When unhinged gangster Charlie (Woody Harrelson) has his pet Shih Tzu nicked, he unleashes hell on everyone connected to Billy's outfit, inadvertently unearthing all manner of psychopaths who eventually end up forming the basis of Marty's new script. 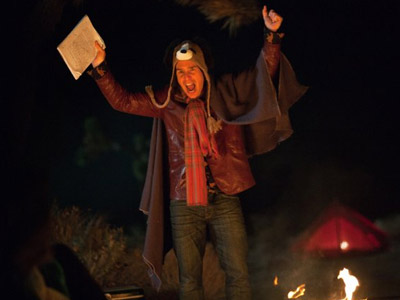 
What we actually have here is the director sending up the modern, cartoonish crime comedy while also subscribing to some of its finer points. Farrell's scribe is forever damning movies that end in meaningless shoot-outs, yet Rockwell's nut tries his hardest to land them in the exact same situation. Walken's character comments on the fact that Marty's script has "awful roles for women", much like the film's actual script, which comically dispenses of its female characters early on. It's no coincidence that Seven Psychopaths' director and lead character share the same name.

When it plays up to the genre clichés, Seven Psychopaths comes across as a Tarantino-lite homage: plenty of knowing winks and nudges, single-serving characters with custom quirks, colourful bursts of ultraviolence and endless narrative detours, which seem to serve little narrative purpose aside from satisfying the director's own creative whim. Only when it kicks against its own archetypes does Seven Psychopaths begin to forge an identity of its own, but by that time, it's already lumbered itself with a glut of dislikeable characters, all of whom fancy themselves the star of their own movie. It makes for an admirable, if disjointed dynamic, wherein the movie slowly starts to eat itself.

As the straight man in the thick of it, Colin Farrell holds up well, even if he is only required to be infuriated and appalled by the surrounding brouhaha. Sam Rockwell is always a welcome presence and gets the lion's share of the LOLs, but he's on too long a leash here and is in desperate need of reining in, particularly as his character only gets more and more rabid. Conversely, Christopher Walken is the movie's quiet calm; just totally and utterly convincing and mesmerising in everything he says and does. It's his best role since Catch Me If You Can in 2002 and a welcome reminder that he's still awesome. 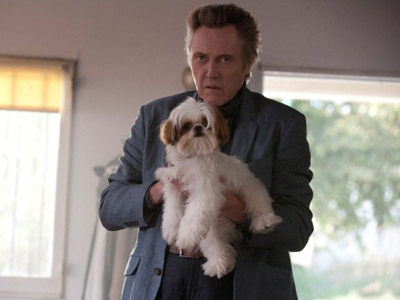 
Bolstered by a fantastic supporting cast – including Olga Kurylenko, Tom Waits, Woody Harrelson, Abbie Cornish and Harry Dean Stanton – Seven Psychopaths often seems unsure what to do with everyone. McDonagh has a surplus of talent and ideas at his disposal, but rather than narrowing his focus for the sake of a coherent end product, he winds up chucking a lot of creative shit at a non-stick wall. There's too much going on; too many characters with too much to say. Blink-and-you'll-miss-'em cameos are one thing, but an uneven balance between comedy and violence leaves you uneasy more than once: frequently, important characters are killed while you still have a smile on your face.

I'm hesitant to roll out the smug old cliché and say Seven Psychopaths is not as clever as it thinks it is, because when it's not trying to simultaneously embrace and repel its own genre, it does get on with the business of being very funny indeed. Unfortunately, McDonagh's lack of restraint in thinning out his own screenplay results in a bustling, unpredictable movie that takes a touch too much pleasure in throwing you curveballs.

More:  LFF2012  Seven Psychopaths  Martin McDonagh  Colin Farrell  Sam Rockwell  Christopher Walken  Woody Harrelson  Olga Kurylenko
Follow us on Twitter @The_Shiznit for more fun features, film reviews and occasional commentary on what the best type of crisps are.
We are using Patreon to cover our hosting fees. So please consider chucking a few digital pennies our way by clicking on this link. Thanks!