"If I'm not back in 20 minutes... come and rescue me," says Kill List's protagonist Jay to his hitman partner Gal, as he enters a warehouse housing the unsuspecting pervert behind unimaginably sick snuff films, preparing for a bloodbath. We wait with Gal in the car as 20 excruciating minutes pass. Shit. Eventually, fearing for his friend, Gal reluctantly takes his gun and sidles slowly into the building, anticipating death around every corner. We hear horrible sounds interrupt excruciating periods of silence as Gal gets closer to seeing his worst fears realised. Finally, Gal swoops around the corner ready to confront whatever horrors await, only to find Jay – hammer in hand, covered in blood from his still- twitching victim, happy as a pig in shit – staring back at him. Beat. "Was that 20 minutes?"

Ben Wheatley has previous experience in mixing comedy and horror – although wicker stab-a-thon Kill List probably qualifies as 'funny peculiar' instead of 'funny ha ha' – so Sightseers is hardly a radical departure for the director. Like its predecessor, Sightseers is uniquely British and as black as tar, but where Kill List was sheer savagery, this is savagely funny – a perfectly measured dark comedy that'll have you howling at its wrongheadedness. It's the most unforgettable 'Brits on vacation' film since Withnail & I, only this time, it's everyone else who made the mistake of going on holiday. 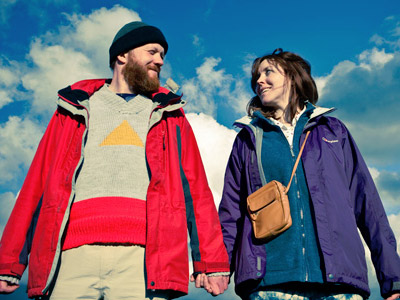 Terrible yes, but not cunts.


Our guides through rural England are loved-up odd couple Chris (Steve Oram) and Tina (Alice Lowe), who escape the rat race for a trip around some of the country's most mundane tourist hot-spots; it starts with Crich Tram Museum and gets less exciting from there. Once they hit the road, however, Chris and Tina find that countryfolk aren't all smiling, ruddy-cheeked, hay-chewing farmers. In fact, some of them are absolute shitbags – Daily Mail-reading, novel-writing, caravanning arseholes. Where you, I or, say, Larry David might have a good old grumble about their behaviour, Chris and Tina bludgeon their way to a happy holiday, piling up numerous corpses as souvenirs.

Oram and Lowe wrote Sightseers' screenplay (along with Wheatley's wife Amy Jump), which explains why they inhabit their characters perfectly and are capable of walking that fine line where comedy and horror intersects. Alice Lowe is a little devil in pale denim, all pouts and tantrums, while Steve Oram is a bearded psycho wrapped in a pacamac – imagine Patrick Bateman with absolutely no style whatsoever. Together they make for a believable couple, naïve and clingy and homicidal, but a good fit – crucial if you're to stick with them every time they graphically club a posh twat to death with a tree branch.

And what a screenplay it is; hysterical and eminently quotable, it's the sharpest, smartest comedy I've seen so far this year. (Favourite out-of-context lines include: "You're evil, you're definitely a witch," "A tree won't belittle your five-year plan," and "Cheap crisps are full of horrors"). Sightseers is peppered with plenty of semi-improvised absurdities, from ChrisTina and the excellent supporting cast, but the body language is equally effective; Alice Lowe is capable of getting a laugh with a curl of her lip. It also has some of the best sight gags you'll see in a cinema this year. 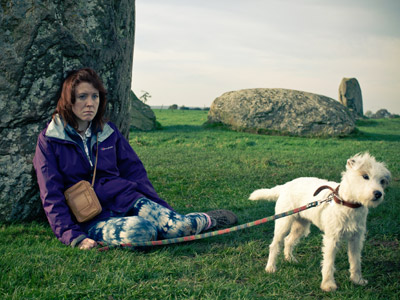 If you don't like blood and guts, it has a cute dog in it too.


It's funny through and through, yet proceedings never descend into farce: all character eccentricities are underplayed, while the comedic situations never feel forced or unnatural. The only exception is a cringeworthy sex scene – complete with a dog licking a bumhole at the moment of climax – that feels like it's from another movie, one far less confident in its own underlying humour. One broad gag, however, does not sour the atmosphere: Sightseers is capable of making you laugh out loud one minute and gasp in disbelief the next. It is balanced perfectly, down to the very last, devilish shot.

Sightseers is a true gem: hilarious, original and uncompromising, it's a film you couldn't imagine being made anywhere else, by anyone else. So wonderful it should be preserved by the National Trust.

More:  LFF2012  Sightseers  Ben Wheatley  Steve Oram  Alice Lowe  Monica Dolan
Follow us on Twitter @The_Shiznit for more fun features, film reviews and occasional commentary on what the best type of crisps are.
We are using Patreon to cover our hosting fees. So please consider chucking a few digital pennies our way by clicking on this link. Thanks!