The ocean must surely be the greatest villain in history. Sparkly on the outside, deadly beneath the surface. Fun to frolic in, but home to some of nature's greatest predators. It even waves at you then pulls you under. Yet still, posh nobs with sailboats and too much spare time attempt to tame the ocean by skiffing on its face - and we're supposed to be surprised when it gets angry and tries to claim them.


All Is Lost is one man versus the ocean. Broadly speaking. Theologically speaking, it is far deeper than that. It is about the futility of faith. It is about getting shit done when the universe is trying its damnedest to convince you to give up. It is about what it means to be alive. It is also about boats.

Essentially, this is The Robert Redford Show. He is the only listed cast member, the sole performer. Redford plays an unnamed sailor - we'll call him Captain Ron - crossing the Indian Ocean for reasons unknown, when the hull of his modest sailing vessel is breached by a loose shipping container floating in the ocean. Captain Ron does his best to level the ship using Macgyver-esque quick-fixes, but the ocean smells blood and moves in for the kill, tossing him around like the turd in the bowl that won't flush. 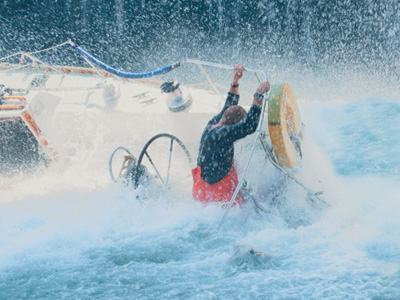 I CHANGED MY MIND I WANT TO GET INTO ROLLERBLADING NOW


In the absence of a charismatic volleyball for Captain Ron to vent to, All Is Lost is practically a silent movie in that there is almost no dialogue whatsoever, save for an opening diary entry, an SOS call and what Ned Flanders would no doubt call "the loudest profanity I've ever heard". Thankfully, the sound design is first rate; creaking hulls, gushing water, lashing rain and high winds all provide their own dialogue to compensate for Captain Ron's dignified silence.

Redford - colossally fit for a 77-year-old - is mesmerising in the role and commands your complete attention. This is acting purely as a physical art form, almost entirely stripped of emotion - or at least any emotion that isn't inherent to the performance. Captain Ron is a cipher - no name, no motivation, no pictures of his kids waiting for him back home. Unlike 127 Hours, there's no internal dialogue to clue us in; unlike Buried, there's no one at the other end of the phone. He is simultaneously everyone and no one. All that matters is that he survives, and Redford works so hard in making you care, it doesn't matter why.

Tedium does threaten to set in after the first 30 minutes due to a lot of boat-based 'tootling' which I'm sure means a lot to the sailors in the audience, but baffled a 'lando' like me. Captain Ron puts up a sail, then takes it down. Captain Ron puts a heavy yellow sack in the water, then he takes it out. Captain Ron scoots up the mast to plug in a doohickey, frowns, then scoots down again. None of this has any bearing on the story - and the bits that do, like Captain Ron's attempts to learn celestial navigation due to his frazzled electronics, are spelled out simply enough - but there are plenty of moments that might drown the non-seafarers among us in detail.

(I'm picturing real men of the ocean watching All Is Lost, scoffing at Robert Redford's knots and belittling his bilge pump. Imaginary sailors are mean). 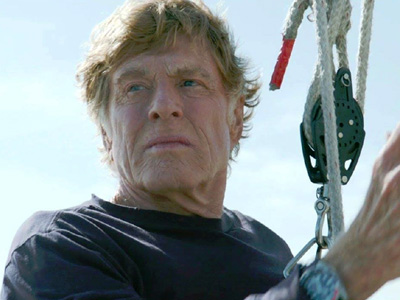 "I'll tie a knot in your goddamn neck you fruity little pissant."


Once the storm kicks up, however, All Is Lost comes into its own. It is fascinating to watch someone survive on their resourcefulness alone, and not in an action hero bullshit way, but in a very real 'life or death' sense. Director JC 'Margin Call' Chandor refuses to let plot contrivances dictate the story and Redford refuses to grandstand in scenes where lesser actors would surely overshoot. All Is Lost is a movie that is understated, yet still manages to play out on a staggeringly huge canvas; the personal and the universal one and the same.

And powering the whole endeavour? The ocean, churning away like life itself, giving and taking away, slowly, quietly, maliciously sapping the energy from our hero with each rolling wave. Redford is magnificent, but All Is Lost is about paying due respect to the awesome majesty of nature and it'd be foolish for me not to do the same.

More:  LFF2013  London Film Festival  All Is Lost  Robert Redford  JC Chandor  Boats
Follow us on Twitter @The_Shiznit for more fun features, film reviews and occasional commentary on what the best type of crisps are.
We are using Patreon to cover our hosting fees. So please consider chucking a few digital pennies our way by clicking on this link. Thanks!