It's hard to watch a recently deceased actor in one of his final films with your opinion of his performance uncoloured. See The Dark Knight and try not to wonder a little how much the Joker's intensity fed into Heath Ledger's state of mind. But James Gandolfini is a different case: I was five seasons into rewatching The Sopranos when he passed away in June, and the fact of his death barely occurred to me as I watched him in the subsequent episodes. I got to wondering why, and didn't fully figure it out until I saw Enough Said. It was because he didn't actually do all that much. But he did nothing a lot better than plenty of other actors do something.

Everything was a hint; a little glance or a smirk, nothing ever explicitly stated. You can watch Tony Soprano's face in certain scenes, as his paranoia got the better of him, slowly darken, moving from boyishness to fury. He barely needed to speak half the time. While it's too easy to get caught up in hagiography, you can't help but feel the next five years or so would've brought a few standout film roles that made his talents more obvious and acclaimed.

It's easy, too, to overthink the idea of a dead man's legacy. If you saw Enough Said's trailer and thought it a shame he hadn't just shot something more monumental when he died, don't: it has more going on than the frothy romcom it seems to be. It's smart and touching, with something to say about the first flush of affection in relationships, and whether they're the best time to make judgements about a partner, before the reality of day-to-day companionship sets in. 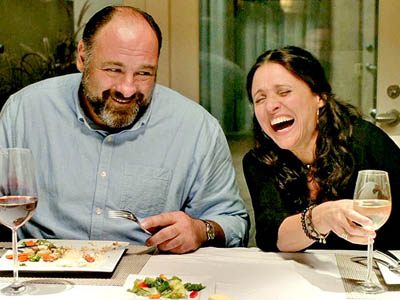 
Eva (Julia Louis-Dreyfus), a divorced masseuse with a daughter about to leave for college, meets Albert (Gandolfini), who's in the same position, and they begin a relationship. She also has a new friend, Marianne (Catherine Keener), who complains about her ex-husband a lot. And of course it turns out Albert and Marianne were married. Where most would come clean straight away - why she doesn't isn't entirely convincing - Eva comes to realise that Marianne's a useful source of information about what sort of partner Albert will ultimately be ("She's like a human TripAdvisor!"), and continues to pump her for it.

It's a good setup, and it could head down a road of frantic cover-ups and farcical parties in which she has to keep the two in separate rooms, which Louis-Dreyfus could do in her sleep, but it doesn't. Instead, it explores her insecurity, and the prospect for single parents of living alone for the first time in two decades when a child reaches college age. She's trying to prolong the inevitable, and even finds a substitute in her daughter's friend, whose hinted fractured home life means she's happy to hang out with Eva.

Louis-Dreyfus plays this insecurity very deftly without recourse to the comic lines she's used to treading, while Gandolfini, with less screen time, supports with an easy wit and an ursine vulnerability. A later scene where he explains in simple, measured terms how his heart is broken is quite lovely: there are no tears or histrionics, because the actor understood, fundamentally, that this was not a man who went in for that sort of thing. 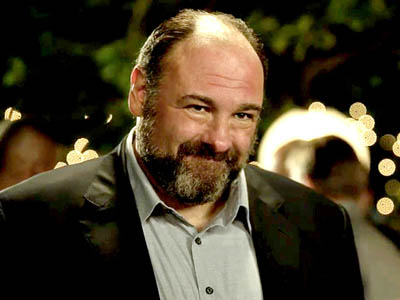 
There is interest too in the fact that this is a middle-aged couple. A million romcoms have done the same story with thirtysomethings whose friends are all beginning to settle down and procreate, leaving them with a hole to fill. Here it's a similar looming void, fast-forwarded 18 years. These characters are realistic about what love is: there's no second-act scene where the man is distracted by a potential dalliance with an impossibly hot woman before overcoming his commitment anxiety. They know what they want because they figured it out years ago; it's just they don't remember so well how you go about it. You believe them totally as a couple.

There's Oscar 'buzz' (sorry) about Gandolfini already. As good as he is here, let's be realistic: no one would be mentioning awards were he alive. It's an unshowy performance by an actor who was always just that, and subtlety rarely put a statue on the mantelpiece. But there are more important things than giving people awards for being good at pretending to be other people, and honouring someone in death is one of them. Give him an Oscar. Enough said.

More:  LFF2013  Enough Said  Nicole Holofcener  Julia Louis-Dreyfus  James Gandolfini  Catherine Keener  Toni Collette  Tracey Fairaway  Ben Falcone
Follow us on Twitter @The_Shiznit for more fun features, film reviews and occasional commentary on what the best type of crisps are.
We are using Patreon to cover our hosting fees. So please consider chucking a few digital pennies our way by clicking on this link. Thanks!