"If it was never new and it never gets old, then it's a folk song," mutters Inside Llewyn Davis' titular muso between performances from a dimly-lit Greenwich Village stage. Those might just be the folkiest words ever uttered, but while they're perfectly accurate, they could just as easily be applied to the Coen brothers' best work. The reassuring familiarity of the Coenverse's unique characters, patois and situations, which sit at ninety degrees to reality, is one of modern cinema's greatest pleasures, and the knowledge that they could take you anywhere is never less than tantalising. Inside Llewyn Davis delivers that old magic in spades, and includes an award-worthy performance from a cat to boot. What's not to love?


It's 1961, and the times they are a-changin' for the music scene. Bob Dylan has just moved to New York and is about to turn everyone's idea of folk music on its head, while nearly 4,000 miles away in Hamburg, a bunch of scousers are laying the groundwork for another musical revolution. We don't see any of this as Inside Llewyn Davis opens, though: we see a man with a guitar playing to a small but appreciative crowd. This is his story, but it's also the story of a sea change in pop culture. It's a film of metaphors and symbols; an odyssey vaguely reminiscent of O Brother, Where Art Thou, in which folk has replaced bluegrass and this Ulysses is less Clooney, more... well, you'll see.

To be honest, the cover of SexyBack is a little anachronistic.


Llewyn Davis is, frankly, a bit of an asshat, but Oscar Isaac plays him with a recognisable frustration at his own misfortune that allows us to take pity on him even when he's heckling other acts and shamelessly bumming cigarettes and sofas from strangers. Incapable of not pissing off everyone from his manager to his best friends (including a permanently enraged Carey Mulligan), he's a tortured soul at war with a world that doesn't want him. His journey brings him into contact with a roster of characters including John Goodman as a jazz dinosaur and Garrett Hedlund as a feckless Beat poet, but nobody wants to help him and his self-destructive nature serves only to fuel his art.

You don't need a PhD in folkology to "get" Inside Llewyn Davis, but a sketchy background knowledge of mid-20th century pop culture will definitely deepen your appreciation. Even without that, there's plenty of fun to be had in watching Isaac's homeless, struggling musician trying to survive and reach a wider audience without compromising his integrity. This requires him to literally and metaphorically try on different coats, some of which are decidedly ill-fitting, while simultaneously tracking down an elusive feline which may represent success, but might equally just be a dumb cat. Either way, the first hour is as funny, weird and, well, Coen-y as you could hope for. A turn towards the dark side leaves the film's home stretch fairly light on LOLs, but by the time it resolves (in a manner not dissimilar to most folk songs) you'll be too entranced by the songs, the characters and the cat's scrotum to care. 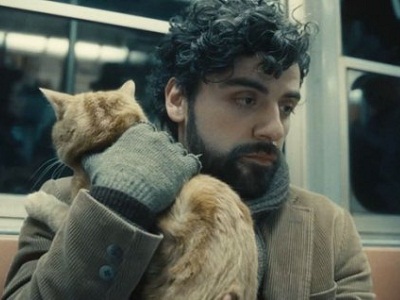 Cat's scrotum just out of shot.


Shot with a wintry, Deakins-esque beauty by Bruno Delbonnel and featuring a must-buy album's worth of gorgeous songs (plus the delirious, Timberlake-infused "Please Mr Kennedy") curated by O Brother's musical overseer T-Bone Burnett, Inside Llewyn Davis is one of the best looking and sounding films of this year's London Film Festival. Some of its beats may work better as allegory than as part of the surface plot, but that only increases the desire for repeat viewings, and with the Coens, that's never a bad thing. Second, third, fourth time round it won't be as new, but it'll never get old.

More:  LFF2013  Inside Llewyn Davis  Joel Coen  Ethan Coen  Oscar Isaac  Carey Mulligan  Justin Timberlake  Garrett Hedlund  John Goodman  Adam Driver
Follow us on Twitter @The_Shiznit for more fun features, film reviews and occasional commentary on what the best type of crisps are.
We are using Patreon to cover our hosting fees. So please consider chucking a few digital pennies our way by clicking on this link. Thanks!