Deep within a heavily armed camp in South America, a group of sober-living hippies under the influence of a safari-shirted old man known only as The Father, have relocated to begin a new life away from the evils of modern society – mediocre broadband speeds, ill-matching Tupperware lids, Starbucks constantly spelling their names wrong - that sort of shit.

Within the congregation of hemp-oil smelling beatniks is Caroline, the sister of Vice magazine journalist Patrick. Seeking to rescue his sister from the cult, Patrick travels to the remote commune with fellow Vice journalist Sam (AJ Bowen, the bearded guy from You're Next) and cameraman Jake (Joe Swanberg, also from You're Next) who intend to document the family reunion, expose this bizarre gathering and interview the charismatic leader. As you can imagine, things get much shitter from there.


Neither shaky found-footage horror nor mockumentary (as this conjures up ideas of a Christopher Guest back-slap-a-thon), The Sacrament is instead a fake documentary using an existing formula to invoke horror through realism. Think 'Louis Theroux goes to Summerisle'. Ti West has form in doing great set-up – The House Of The Devil's brilliant eighties artifice, The Innkeepers' affecting rom-com with a gory edge – but then completely fudging the final act. There's a youthful hurry in West to get to an ending fast. Fine for 13 year-old boys in a wank race. Not fine for grown-up filmmakers trying to satisfyingly wring the tension out of slow burn horror.

In The Sacrament, West has upped his game considerably, letting the film breathe at its own pace, employing judicial editing and deliberate pacing, and letting the third act play out slowly in all its apocalyptic glory. 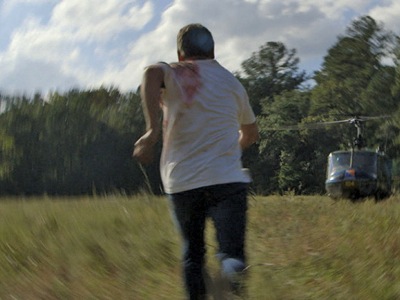 Rushing towards the ice cream helicopter before it runs out of Screwballs.


Having to abide by the rules of contemporary documentary filmmaking means that West has to provide satisfactory backstory and insight into each character within the camp. The interview sections are particularly disarming, although with a fittingly sinister score by Tyler Bates, the knowledge that you're being lulled into a false sense of security is constantly apparent.

The use of Vice magazine anchors it in the real world and feels like a useful device rather than a cynical piece of cross-marketing. Although what Vice magazine is doing here and not attending a Terry Richardson sexualised infant photoshoot I'm not sure.

The trendy documentary style (check out the Hector Rounded font on the credits and The Knife on the soundtrack) also means we get some beautifully formal camera work. A scene involving Caroline administering a lethal dose of Kool-Aid to her brother while tied to a chair is made all the more excruciating with the handheld camera left marooned across the room, providing a subjective, yet beautifully framed eye to a heartwrenching and confrontational scene.

Subjectivity is at the heart of this film, and the commentary on who is behind the camera and what their level of bias is within a given situation is handled with grace and subtlety. Other questions regarding journalistic non-involvement are also handled with surprising gravitas. The key scene, and one of the stand-out pieces of cinema this year, has The Father (played with ever-increasing terror by Gene Jones – he's the old guy in the gas station at the beginning of No Country For Old Men) being interviewed by Sam in front of a rapturous audience of followers. 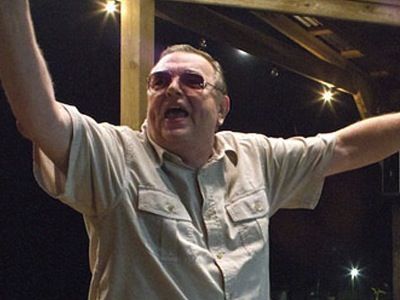 
Sam goes from barely concealed aggression to wavering doubt in his enquiries as the camera creeps ever so slowly closer to The Father as he in turn works his hypnotic magic over Sam, the followers and indeed us. After a mesmerising monologue, The Father's charm soon turns to threat and eventually the three journalists are left with no doubt they are completely vulnerable here.

The Sacrament at its heart is a fictional recreation of the Jonestown Massacre, where 907 cult members took their own lives in 1978. Thanks to Family Guy and other TV shows that trade on references as an excuse for humour, Jonestown and drinking the Kool-Aid had become nothing but a punchline. By plunging the viewer deep inside a similar situation with an unblinking eye, The Sacrament has managed to bring weight and requisite horror to a pop culture footnote.

Really this is exactly how Wanderlust should have ended. Paul Rudd's increasingly unemotive eyes rolling back inside his head as the cackling skeleton of Jennifer Aniston syringes cyanide into his mouth; the foaming mouthed bodies of Justin Theroux and other Apatow flotsam juddering through their final death rattles around them. Such a missed opportunity.

More:  LFF2013  Ti West  AJ Bowen  Joe Swanberg  Amy Seimetz  Gene Jones  Kentucker Audley  The House Of The Devil  Youre Next  The Innkeepers  Wanderlust
Follow us on Twitter @The_Shiznit for more fun features, film reviews and occasional commentary on what the best type of crisps are.
We are using Patreon to cover our hosting fees. So please consider chucking a few digital pennies our way by clicking on this link. Thanks!