I figure as we're still technically in the same week that the London Film Festival closed, I can just about get away with posting reviews for films that I saw over its duration. We've all moved on from LFF mania now, but let this leftover review of Compliance act as a timely reminder of just how good us film fans had it slightly less than a week ago. Good times indeed.


Thanks to countless shitty ghost stories and found footage horror rip-offs, the words 'Inspired by true events' are now about as meaningful as a Cheryl Cole lyric. Compliance, however, wants you to know it really IS based on a true events, plastering those fateful words across the full length of the screen in its opening seconds, just in case you thought it was too outlandish for fact. Had you stumbled across the film after that forewarning, you might have thought it was too ludicrous a conceit – truly it is a story stranger than fiction, and way more terrifying than any shabby haunted house yarn. 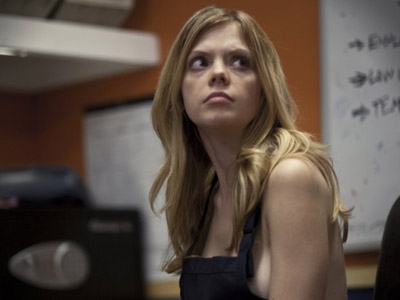 Although bad things do happen to hot girls in small rooms.


We live in an age where 'evil' is just as likely to be twirling its moustache and cackling as it is stroking its neckbeard while trolling on the internet. Now that last of the cartoon bad guys Osama bin Laden is dead, the likes of Anonymous, LulzSec and Wikileaks are the terrifying new villains of the modern age. Though in reality these nebulous clouds of anarchists are probably comprised mostly of bored teenagers hacking for shits and giggles, the fact that their combined might can affect real world change is frightening to say the least. This is a fear that Compliance taps into, even though it focuses on the acts of just one man, and one using a mobile phone instead of an internet connection.

We pick up the story in fast food restaurant ChickWich, where the usual array of feckless teens line up to receive their daily orders behind the grill. Manager Sandra (Ann Dowd) has just got done drilling the uninspired troops when she receives a phone call from a police officer, informing her that server Becky (Dreama Walker) has been caught stealing money from a customer's purse. Officer Daniels sternly informs Sandra that she'll have to keep Becky in the back room and not let her leave until one of his men arrives to take her downtown. Oh, and in the meantime, she's going to have to strip Becky completely naked and give her a full body cavity search to find the missing money.

It is around this time that literally everyone in the known universe except Sandra will figure out that, actually, Officer Daniels isn't a police officer at all, but one sick individual intent on getting his jollies over the phone. 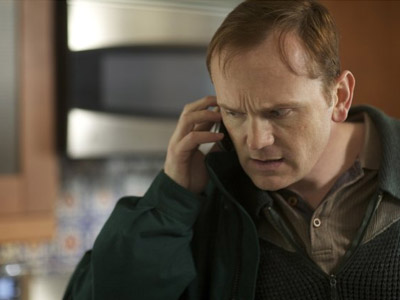 
Just as troubling as the mental state required to commit such an act is the unquestioning obedience with which Officer Daniels' orders are carried out by the restaurant's staff members. Ann Dowd's Sandra is note perfect as a big fish in a small pond in a tiny town – the kind of manager whose idea of a major crisis is a shortage of bacon. All nervous smiles and softly-voiced platitudes, she is a terrifyingly passive villain – the kind that only wants to do right by all. Pat Healy as the caller – unseen for the movie's first half – is a genuinely unnerving presence, subtly shifting his intonation depending on whom he's talking to, projecting absolute authority one minute and sweet-talking Sandra like a child the next.

As chilling a story as it is, Compliance is not entirely suited to cinema. A single-hander with a single location for its majority, you suspect it would be better suited to a play than a film – or even a feature-length documentary à la The Imposter. Though it does feature the most interesting shot in the movie – a continuous ride to the restaurant in a squad car, during which you realise the police station was always only ever a two-minute drive away – an epilogue robs the movie of its last act impact, providing a resolution best left to the imagination. Having talking heads where the characters explain how they felt seems an odd choice, given that the movie does such a great job conveying that organically.

About as far from an easy watch as you could imagine, Compliance is a seedy little story that you'll wind up watching between the cracks in your fingers, but ends up feeling like little more than the incident's Wikipedia page on film. One thing you can't accuse it of, however, is treating the material lightly: this is a true story that stretches the very limits of your credulity and is all the more gut-wrenching for it. You will need a shower afterwards.

More:  LFF2012  LFFtovers  Compliance  Craig Zobel  Ann Dowd  Dreama Walker  Pat Healy  Bill Camp
Follow us on Twitter @The_Shiznit for more fun features, film reviews and occasional commentary on what the best type of crisps are.
We are using Patreon to cover our hosting fees. So please consider chucking a few digital pennies our way by clicking on this link. Thanks!