Yann Martel's novel The Life Of Pi is one of those books that many people - myself included - will swear is one of their all-time favourite reads. A gripping tale that is, above all else, a life-affirming study of survival and faith. And now, after almost 10 years of trying to get a movie adaptation off the ground, the supposedly 'unfilmable' story is brought to life in such magnificent, spectacular fashion that, well you might as well no longer bother with the book. Seriously, this is pretty much the gist of it. And reading takes ages anyway.

The fact that this is a worthy version of the novel is a huge accomplishment in itself: the story of a boy named Pi trapped on a boat in the middle of the ocean with only a vicious Bengal tiger for company is no easy sell. And yet Ang Lee proves himself a masterful storyteller, capturing imagination and commanding attention during even the most arduous of low points during Pi's trial of endurance. Above all else though, Lee presents a film that is visually arresting, having replaced impossible inner monologues with glorious CGI artistry.

The achievement is all the more important given that storytelling itself is a theme throughout the film. We are first introduced to Rafe Spall's writer prompting Irrfan Khan’s grown-up Pi to tell him this tale under the promise that it will ‘make him believe in God’. It’s a tall order, but come the film’s end, the pay-off works completely, winning over (while not quite ‘converting’) even the most cynical of viewers with its quiet sentiment.

Yet the film is not as as pompous as the awards-focused marketing suggests. Like the sunken freighter that leaves poor Pi stranded at sea, the story moves with “the slow, massive confidence of a continent”, but the fitting glacial pace of the middle section is still punctuated with moments of levity throughout. While Pi remains seemingly static at sea, his survival wrings as many laughs as heartstring-tugs. Comic moments come from Pi confronting fascinating ocean creatures and his attempts at training Richard Parker (Pi’s fortuitously named tiger companion), and they provide the perfect counterbalance to the many small, simple tragedies that highlight his hopeless situation. 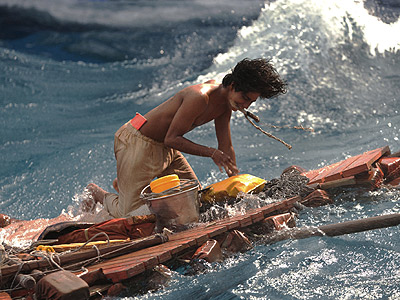 It is, however, this middle section that drags for a little too long. It’s meant to, of course – like James Franco trapped in a canyon for 127 Hours, we need to appreciate Pi’s long and lonely suffering – but itchy feet still set in just a little before his raft sets a course for a satisfying conclusion. Having said that, for a film that has very little plot to tell, the movie is too lusciously captivating to really worry about the running time. And it helps that the story calms only after a ferocious storm that is an awesome portrayal of perilous chaos, filling the screen with crashing waves and raging winds. The focus of the film’s incredible visual effects will no doubt be on the photorealistic, pixel-perfect tiger, but the orchestration of this terrifyingly tense storm scene deserves just as much attention.

The visuals are really the key to this film, with frequent shots of mesmerising landscapes and dazzling CGI brilliance. Between humbling skies reflected on a still ocean, to the many forms of wildlife encountered on Pi’s journey, the movie seems to split its time between being a powerful drama and one of those specially made nature documentaries designed to show off the best cinematic technology available. In this case, it is the 3D that is truly extraordinary, appropriately bringing to life Pi's fantastical voyage. 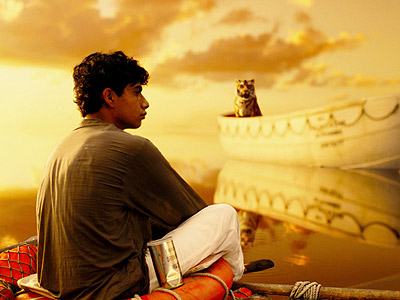 The fact that the whole film rests on the shoulders of star Suraj Sharma is nothing short of astonishing. With no previous acting experience, Sharma gets by with a natural innocent charm during the lighter scenes, but still manages to convince with grief, desperation and anguish in scenes that require more emotional heft. That there are so few ‘young Indian male’ roles in mainstream Hollywood means that Dev Patel should now start to worry.

Overall, Life Of Pi delivers much more than you would expect from such an obviously ‘worthy’ film; it’s brutal without being graphic, gorgeous without being artificial and powerful without being preachy. Plus, it contains a tiger. Tigers are cool.

More:  Life Of Pi  Ang Lee  Suraj Sharma  Irrfan Khan  Rafe Spall
Follow us on Twitter @The_Shiznit for more fun features, film reviews and occasional commentary on what the best type of crisps are.
We are using Patreon to cover our hosting fees. So please consider chucking a few digital pennies our way by clicking on this link. Thanks!