Yes, that six-minute long shot at the end of True Detective's fourth episode was amazing. But in episode five of Line of Duty, there was something just as groundbreaking.


One notices throughout Line of Duty that it is interested in procedure. And TV cops are not, traditionally. The rulebook is their enemy. Shoot a guy in the shoulder to get him to talk, take pity on a wayward prostitute and let her sleep on your sofa, drink a pint of bitter in a rural Oxford pub and do a cryptic crossword at 11am. Then when the chief super's all up in your grill about it, uncover the decades-old murderous secret behind a seemingly respectable institution and tell him to go fuck himself.

There is no celebration of showboating or off-the-books recklessness in Line of Duty. For the most part, everyone does everything by the book. They run things past their superior officer before doing them. If he says no, they don't do it. Evidence is properly catalogued; document serial numbers read out in full for the benefit of the interview tape; reports completed on time. Because that's how police work actually happens. By the traditional TV police model, this should be dull. It isn't: it's realistic, and it shows you a case being built up, piece by piece. These are the true detectives. There is tension enough in the human cost, spent and potential, of the case itself, without the need to insert it artificially.

Establishing this structure so completely allowed for something quite remarkable in last week's fifth and penultimate episode of season two: an interview, entirely unbroken by cuts away to other scenes, which lasted about 16 minutes. This is basically unheard of. 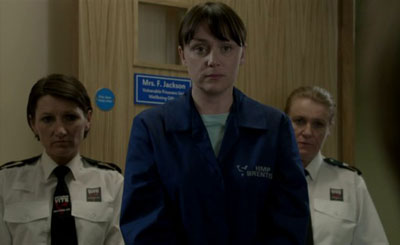 Keeley Hawes, in an Atomic Kitten tribute band that in truth was doomed from the start.


It was the culmination of five episodes in which you'd grown increasingly suspicious of Mark Bonnar's Detective Chief Constable Dryden, whom DI Lindsay Denton (Keeley Hawes), on remand for conspiring to murder two fellow police officers and whom you'd been led to presume innocent, was accusing of setting her up. That Dryden seemed the big fish in the whole shadowy operation gave you the sense that everything had been building to this, leaving you untroubled that you were being given more than just the usual key beats of the interview.

Usually it's the edited highlights: suspect is bullish to begin with, gets tripped up, cracks when he's shown a photograph of a dead girl, and it's all back to the office five minutes later for celebratory filing-cabinet scotch. Not here: what we saw was more like stage drama. After the introductory buzz of the recording tape being switched on (far longer than an editor would normally allow, with tense glances exchanged throughout) there was power play to address first. Now under arrest, the DCC no longer had the usual right to be interviewed by an officer two ranks above him, and had to contend with a lowly sergeant and constable, Arnott and Fleming (Martin Compston and Vicky McClure). His opening comments made clear he wasn't happy about it.

By the end it'd turned the whole thing on its head, and on seeing Denton after, smirkingly watching Dryden on Sky News with a glass of Pinot Grigio, you didn't know if you were watching the scapegoat you'd felt for over the last five hours, or the mastermind behind the whole thing.

More:  Line Of Duty  Martin Compston  Vicky McClure  Keeley Hawes  Mark Bonnar  Craig Parkinson  Jed Mercurio  BBC
Follow us on Twitter @The_Shiznit for more fun features, film reviews and occasional commentary on what the best type of crisps are.
We are using Patreon to cover our hosting fees. So please consider chucking a few digital pennies our way by clicking on this link. Thanks!