I saw Looper on Friday last week, and rather than frantically post a knee-jerk reaction review as soon as possible, I thought I'd attempt something a bit different. I loved it and immediately wanted to froth about how it was the best sci-fi of the year and a genre classic in the making, but these sort of labels can only be correctly applied with time. Thus, I'm posting this feature with a blank space, in which my future self – 30 years into the future, as in the film – can write his considered opinion, discussing the longevity of Looper and whether it stood the test of time. Hopefully by 2042 time travel will have been invented and the Ali Gray in 30 years will be able to send back his review, giving us a unique insight into how Rian Johnson's film held up. Fingers crossed it works!


Greetings from 2042! I almost forgot I asked myself to put this retrospective on Looper together, but then I am getting a little absent-minded in my old age. Yes, I'm still blogging. Obviously. Before I start, I expect you'd like a little bit of background on what the future holds. In short: England never won anything at football, Samsung were defeated by Apple in World War III and President Lohan finally legalised ultracocaine. To be honest, it's been a bit quiet here since everyone fucked off to live on Earth II, although to be fair, they do have much better WiFi over there. That's enough history for you, let's talk cinema!

Rewatching Looper on 4D Holo-ray, it struck me just how little the movie relied on its central time travel conceit. I can still remember the early trailers, which made it look like a Terminator-esque mindfuck face-off between the past and future self of Joseph Gordon-Levitt/Bruce Willis' character Joe. In actual fact, the time travel was just used as a catalyst to tell a story – the concept was great, but the film asked you to invest in more than just that suspension of disbelief. It required you to care about the characters, which it went to great lengths to humanise.

Joseph Gordon-Levitt was excellent, showing exactly why he went on to become one of America's finest living actors. Rian Johnson – whose first name I have literally just now discovered rhymes with 'Brian' – didn't let contract killer Joe slip easily into the archetype of good guy or bad guy, despite his less than savoury profession. Ditto Bruce Willis' Older Joe, the other side of the coin, whose goals were equally valid and no less noble, even if his methods were a little more savage. It's a shame to think that Looper was one of Bruce Willis' last truly great films before he had that fatal heart attack on the set of Never Say Die Hard Again in 2020. 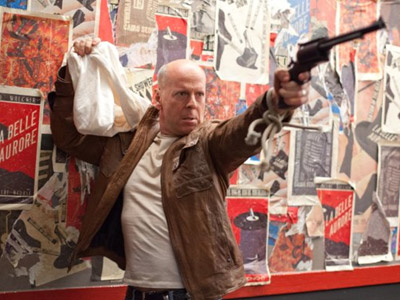 He's buried next to Arnie and Sly in the Schwarzenegger Memorial Gardens.


The interaction between Gordon-Levitt and Willis was electric: all simmering tension and barely withheld contempt, neither one quite able to believe the other man is them. The first meeting between the two, over a cup of coffee à la Heat, was a masterful way to unfold the more complex elements of the plot without ever seeming like exposition (the way Older Joe mocked his younger self in French, which he hadn't yet learned, was a neat touch). Aside from the Gordon-Levitt narration, which popped up sporadically when needed, Looper was a perfect example of showing and not telling; Willis warned his younger self – and the audience – not to worry about plot logistics and paradoxes, saying "We'll only end up drawing diagrams on the table with straws." A smart idea.

Importantly, when the time for talk was over, Johnson was able to back it up with action. Looper's many shoot-outs instilled a real sense of danger, thanks in part to those wonderfully archaic 'blunderbuss' guns – just one of several neat 'future' devices that were scuzzed up to give them that lived-in feel. Looper had a unique aesthetic; the cars crudely slapped with solar panels, the clunky hover-bikes, the anachronistic 80s fashions. It was a sci-fi so packed with original and exciting ideas it almost struggled to contain them all. Johnson threw us curveballs every other scene and showed himself to be incredibly bold in following up on them; Looper bore the mark of a film with true conviction in its ideas.

I've just realised I haven't referenced the fact I'm writing this from the future for a few paragraphs. Um, the iPhone 5S is pretty cool, I guess. 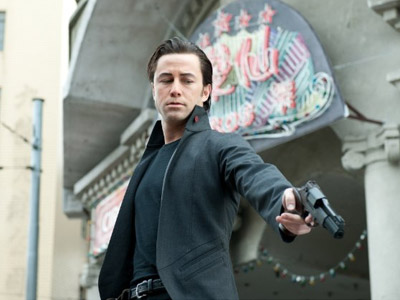 
With the benefit of 30 years of hindsight, I guess Looper did sag a little in its final third when it got holed up at the remote farmhouse, Walking Dead-style (keep the faith guys, it really picks up again in season twelve), although that lull in action allowed the exquisite Emily Blunt's character to come to the fore. She would have hardly been thought of as Looper's trump card at the time, but what could easily have been a redundant love interest wound up being one of the most interesting elements of the movie, subtly altering the movie's dynamic from gun-toting shoot-'em-up to something altogether more relatable. It was around about the time Blunt was introduced that you first realised Looper was not the movie you thought it would be and was all the better for it.

The past three decades have been kind to Looper, which certainly withstood the test of time as I'd hoped. Sure, there have been bigger, more expansive sci-fis since (be patient: James Cameron still has a few aces up his sleeve), but few movies in the 21st century thus far felt quite so perfectly self-contained. Ultimately, all of Looper's ideas, elements and actions looped back on themselves to create a thrilling, fascinating and fiercely imaginative head-scratcher that was undoubtedly the best sci-fi of 2012. Not that it had much competition. What else even came close? Total Recall? The threemake starring Heath Ledger's hologram was way better.

PS. I am writing this while on a jet pack.


Wow, I can't believe that worked! An intriguing glimpse into all of our futures, there. Thinking about it, I really should have asked myself for this week's lottery numbers. Oh well.

More:  Looper  Rian Johnson  Joseph Gordon-Levitt  Bruce Willis  Emily Blunt  Paul Dano  Jeff Daniels
Follow us on Twitter @The_Shiznit for more fun features, film reviews and occasional commentary on what the best type of crisps are.
We are using Patreon to cover our hosting fees. So please consider chucking a few digital pennies our way by clicking on this link. Thanks!