Sure, it might sound a bit like the title of a late-eighties straight-to-video Van Damme movie, but it's just good ol' Louis Theroux, diffidently doing the jailhouse rock. Again.

Loves a prison, does Louis Theroux. He seems at his most intrigued (corresponding facial expression: 'amiably perplexed') when hanging around maximum security wings with men called 'Gripper' or 'Big Keith'. Having paid a visit to San Quentin State Prison in California three years ago (broad conclusion: prisons are quite violent places), now he's high-tailed it over to Miami County Jail, where he found that jails are quite violent places too.

You don't say. So what is Louis telling us that we don't already know?

Answer: not much. As we saw earlier this year when he revisited the Westboro Baptist Church, he's beginning to go over old ground. Though he went back to see the 'God Hates Fags' brigade at least notionally because of recent chinks in their armour after they shed a few members, he presented essentially the same documentary as he did in 2007's The Most Hated Family in America. Find crazy people, point camera at them, pretend to attempt rational debate, act surprised when their arguments defy reason.

This isn't to say that it wasn't interesting. He could go and visit the Phelps family once a month and I'd still watch it, because they're fascinating. It's just that you'd think he'd have better things to do. 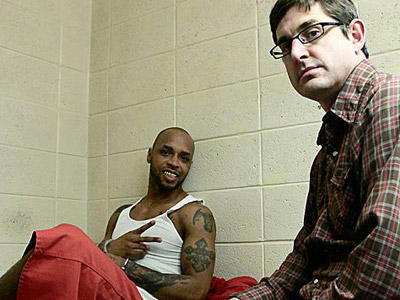 So no, we're not seeing anything much that's new in Miami Mega Jail, but Theroux's fixation with subcultures - and willingness to get up close and personal with them - rarely fails to produce something watchable. Here it's by focusing on a handful of different characters within the institution, and observing the ways in which they interact with it and survive within it.

We see Rodney Pearson, all affable braggadocio, awaiting trial for murder and more than happy to talk about 'the code', ie the idea that inmates spend a fair amount of time getting the shit kicked out of them or earning their stripes by fighting back. "Do you approve of the code?" asks Louis, but kind of misses the point in doing so: this is an unwritten rule of an institution, and there is no more point in an inmate's judging its worth than there is in his trying to change it.

Most disturbing is his encounter with N'Anthony Martinez, a small, bespectacled young guy on remand for the last three years, who looks like he belongs anywhere else but here. Louis zeroes in on him as any documentary-maker would. He's charged with attempted murder and seems calm enough, and once in the communal cell he simply sits on his bunk for 24-hour stretches, hoping not to give anyone a reason to take issue with him.

Instinctively you think he's innocent. On further questioning Louis puts aspects of his case to him - the fact that the victim was a girl he had always disliked, and hints of a violent attack - and Martinez lets him know he'll be pleading insanity. It's at this point you realise the kid's outer calm is probably just dead-eyed sociopathy. 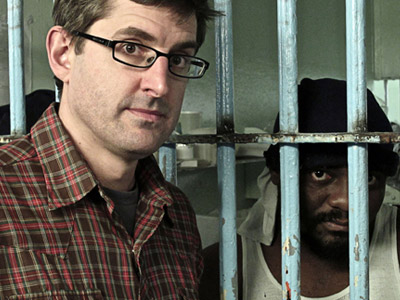 "I'm looking forward to having cream tea when I get home. Anyway, see you later!"

Which, again, is something we probably knew already. Implicitly comparing the moral code of the jail to that of the outside world doesn't really get us anywhere: we know it's a nasty place, no matter how many free XBoxes the Daily Mail reckons you get. But Louis's fascination with prisons seems genuine, and if all else fails, a documentary-maker's real desire to learn more about his subject is always enough to carry it.

And if not, you can always just throw in some mental Christians.

More:  Louis Theroux  Documentary  BBC
Follow us on Twitter @The_Shiznit for more fun features, film reviews and occasional commentary on what the best type of crisps are.
We are using Patreon to cover our hosting fees. So please consider chucking a few digital pennies our way by clicking on this link. Thanks!