Having shed the freak-show tenor of his early work, Louis Theroux has become a documentarian you trust implicitly - even when the film ends on an implausible high note.


When a documentary delivers an improbable twist it tests your resolve. You are so used to their structure and grammar that you expect truth from them at all times, whether it involves a happy ending or not. This is particularly true in Louis Theroux's case, where he tends not to tell a story so much as peek through the door at a case of affairs, allow you to to experience it, and then leave the protagonists to it and you to think. No arcs, no resolution.

A documentary-maker should punch the air if they're lucky enough that something dramatic happens while the cameras are on: it's the cherry on the cake. So the Agee family's power being cut off halfway through the filming of Hoop Dreams was a narrative stroke of good fortune, frankly, for the filmmakers (this is not meant callously; they paid the family's bill to get it switched back on): it arrived just at the right time, or was edited as such, to show the odds stacked against Arthur Agee and the beginning of his decline as a basketball prospect.

In Louis' Edge of Life, though, an unlikely development clashes a little with his usual structure. Setting out his diffident stall at Cedars-Sinai Medical Center in LA, he spent weeks alongside terminal patients suffering leukaemia and degenerative brain conditions, investigating the American physician's habit of going further with end-of-life care than is common anywhere else. None of the doctors is, or could be, accused of giving false hope - the problem seems more one of reaching the deaf ears of the family when the news is of the worst kind - but the question is raised again and again of whether another round of expensive treatment with almost no hope of remission is the best course. 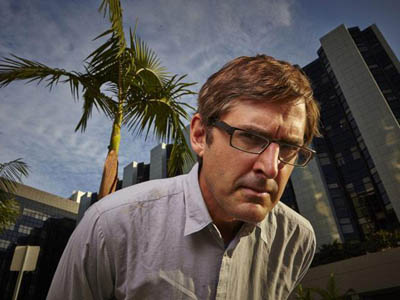 It's a camera, Louis.


Theroux raises these questions with a probing sensitivity, never overstepping the mark or pressing for easy tears, and this is why we've come to trust him over the years: he asks the questions you want the answers to, and all the while behaves without a hint of an exploitative agenda.

The case of Langston, a 22-year-old college football player in a vegetative state following a drug overdose - a cause and effect on which the film makes no moral judgment - is the one on which the programme is mainly hung. He is unresponsive, and his family refuse to accept the doctors' prognosis that the best he can hope for is a life spent in oblivion and nursing care. He is, they insist, "a fighter". Everyone in the history of filmed fiction and non-fiction has declared this in the face of the same situation. I imagine my own family probably would too, despite my long history of capitulation when faced with the tiniest of obstacles: it's just what you say. You're even a little frustrated by their optimism, because it seems they're failing to factor in the quality of life Langston is likely to have. Then when the impossible happens and he actually wakes up, and even answers questions, it has a couple of effects on the film.

First, I found myself oddly ambivalent about it: it's a heart-tugging moment, for sure, but the part of me obsessed with narrative integrity felt a little short-changed. The picture of a wing full of no hope had been built up, and this contradicted it, with the doctors unable to offer explanation. The family's anti-science argument had been borne out. If eight seasons of House has taught me anything, it's that there's always an answer, and maybe I'm so geared towards demanding one that my tin heart can't be dented. This says nothing good about me.

Second, and most interesting, the jar with the usual grammar of a Louis Theroux documentary was quite stark. As I mentioned, he doesn't deal in narrative upswing: by and large, everything just is what it is. But where something so profoundly improbable seeming to happen during filming would usually set my alarm bells ringing - maybe it was edited to make the condition look more severe, setting up a fairytale ending - I just trusted it for what it was. See, if I was eight and he pulled up outside my school in a panel van proffering sweets, I'd jump on in and start pounding the free Tangfastics. Because I trust Louis Theroux, and that's a wonderful quality for a documentarian to have.

More:  Louis Theroux  Documentary  BBC
Follow us on Twitter @The_Shiznit for more fun features, film reviews and occasional commentary on what the best type of crisps are.
We are using Patreon to cover our hosting fees. So please consider chucking a few digital pennies our way by clicking on this link. Thanks!