It's The '70s! Hooray! I Heart The '70s! Do you remember The '70s? I do! If I wasn't gliding around a roller-rink listening to disco music in hot-pants, I was sunbathing next to the swimming pool at my mom's house listening to an AM radio, phoning the DJ to request Bachman-Turner Overdrive multiple times and giggling with my best friend who won't figure hugely in my later life. Do you know what the best thing about The '70s was, though? Apart from the fonts. There were some great fonts in The '70s. No no, the best thing about The '70s was porn!

That pretty much sums up the first two-thirds of Lovelace, the debut feature from Oscar winning documentarians Rob Epstein and Jeffrey Friedman. It's the wild and crazy ride of Linda Lovelace, as seen through a filter that makes it safe to view the '70s and its sexual revolution without guilt. The filter that allows Deep Throat - the 1972 Linda Lovelace porno that was the first to straddle mainstream and underground success – to be repackaged in a retro-chic cover and sold in HMV on the back of Boogie Nights' success. It's the filter that allows the vile and publicly acknowledged mistreatment of Linda Lovelace by her 'manager' Chuck Traynor to be pushed into a purposely forgotten place and allows us to enjoy retro-porn with our tongues firmly in our cheeks.

And that's the final third of Lovelace. The bad shit. The part where we backtrack through all of Linda's triumphs; the parties, the roller-discos, the promiscuity, the laughs, and it's revealed what a frightening and violent time she was really going through. Forced prostitution, rape, gang-rape, threatened with a gun to star in Deep Throat, having to suck off James Franco dressed as Hugh Hefner – really horrible shit. 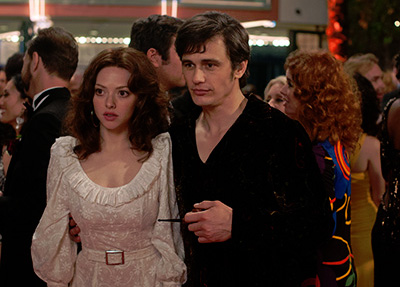 James Franco again failing to be anyone but a man screaming "LOOK AT ME I'M JAMES FRANCO! LOOK LOOK LOOK!"

Peter Sarsgaard appears in a brave and thankless role as Chuck Traynor, looking like the very embodiment of a 'last seen leaving with' CCTV still. He's equally great when he's bottling up his obvious aggression to Lovelace's parents and when he's pleading "it was just passion" after raping Lovelace on their wedding night. He's also weirdly funny in places: whether driving around in a gold car like he's Mr Moneybags from Monopoly or when he's snorting a line of coke off his smashed wedding picture (see what I mean by heavy-handed) and then fires a pistol at the head of a Lovelace-branded blow-up doll in impotent rage. 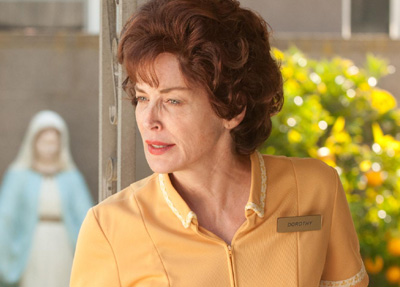 
Elsewhere Sharon Stone, now happily married to the Robert 'T-1000' Patrick, is heartbreakingly upsetting as the Worst Mother Alive, and her appearance really makes you reappraise her role in the exploitative sex-murder-fest Basic Instinct. The rest of the cast – Hank Azaria in full Moe Szyslak mode, a fleeting Wes Bentley (which basically describes his whole career) and the dead-eyed Patrick - are merely blips on the radar. It seems as if a massive cast has been trumpeted on the poster to suggest a rich tapestry of Altman-esque character interaction when in fact they're all given ridiculously short shrift. The 90 minute running time barely gives the protagonists themselves much of a story arc.

For any kids counting: I used the words 'ride', 'straddle', 'tongue', 'cheeks', 'comes' and I almost used the word 'rod' but I edited it out.

More:  Lovelace  Sex  Rob Epstein  Jeffrey Friedman  Amanda Seyfried  Peter Sarsgaard  Hank Azaria  Juno Temple
Follow us on Twitter @The_Shiznit for more fun features, film reviews and occasional commentary on what the best type of crisps are.
We are using Patreon to cover our hosting fees. So please consider chucking a few digital pennies our way by clicking on this link. Thanks!